Work at a funeral home can be mundane. Until accidentally you start bringing the dead back to life.

If you like contemporary fantasy with snarky humor, unforgettable characters, piles of pastries, and a little paranormal mystery, you’ll find it hard to pry yourself away from the Cassie Black Trilogy…a fish-out-of-water tale that takes you from the streets of Portland to the Tower of London.

What Readers Have to Say About Book One: The Undead Mr. Tenpenny…

All books are currently available!!! Click the covers to find your preferred retailer. 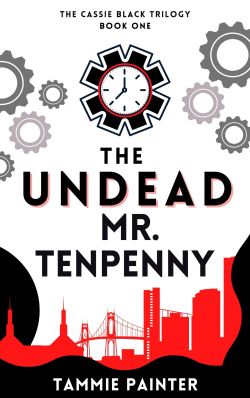 Just when Cassie believes she has the problem under control, the recently-deceased Busby Tenpenny insists he’s been murdered and claims Cassie might be responsible thanks to a wicked brand of magic she’s  been exposed to. The only way for Cassie to get her life back to normal is to tame her magic and uncover Mr. Tenpenny’s true killer.

Ever have one of those weeks? You’ve taken an overdose of magic, you’ve just melted a twelve-year old girl, and Magic HQ has sent a letter “requesting” you come by to discuss your magic control issues.

No? Just me then?

I don’t want to go. I’ve got a boss in a wheelchair (my fault), a zombie cat who demands his treats on schedule, and no interest in sorting out the quirks of another magical community.

But when someone slips me information tying my parents’ disappearance to HQ, I can’t pack my bags quickly enough.

I’m soon destroying historical displays, befriending befuddled ghosts, and focusing more on uncovering the truth about my past than on figuring out how to rein in my magic. Which, since HQ has a test for me that if I fail… Well, best not to think about that.

This second book of the Cassie Black Trilogy squeezes you through a magic portal, lodges you in a hidden corner of the Tower of London, and plunges you into a tale of mysterious mishaps, peculiar ravens, and bone-knitting trolls.

Sometimes taking an overdose of magic is the least of your worries.

Cassie Black has just lost two people through a magic portal. Her archenemy, the Mauvais, is threatening to destroy city after city if HQ doesn’t hand her over to him. And HQ isn’t exactly saying no to that offer.

As HQ debates Cassie’s fate, Cassie refuses to sit by and watch the grass grow between the toes of the surveillance gnomes. Biting back her life rule to never get involved, she knows the only way to stop the Mauvais is to go after him herself.

Which is exactly what he wants. Because the instant Cassie falls into his hands, the Mauvais will gain the unlimited power he’s always craved.

So don’t get captured, right? Easy for you to say.

Trouble is, there’s a traitor within HQ who’s proving to be more devious, more powerful, and to have more tricks up the sleeve than anyone could have ever guessed.

In this page-turning conclusion of the Cassie Black Trilogy, the curses are flying, the pastries are plentiful, the bookworms are slithering, and the magical batteries are charged to capacity.

The links above will take you to Books2Read which can magically find all the stores where these books are sold AND can even locate all the shops where they’re currently available in your country. There’s no extra fee and it’s wonderfully convenient, so don’t be shy to try them out!