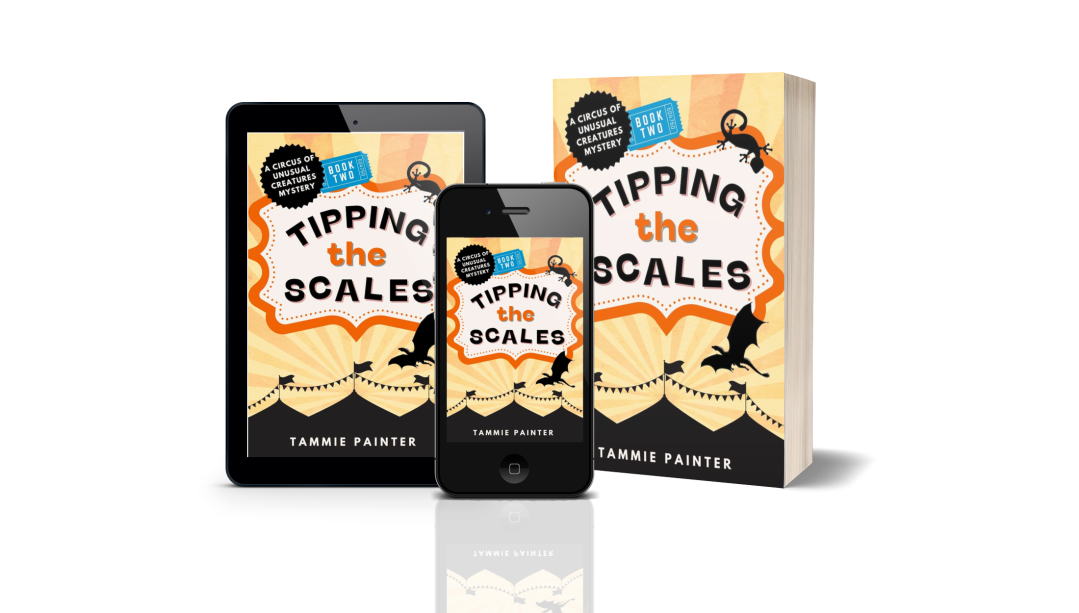 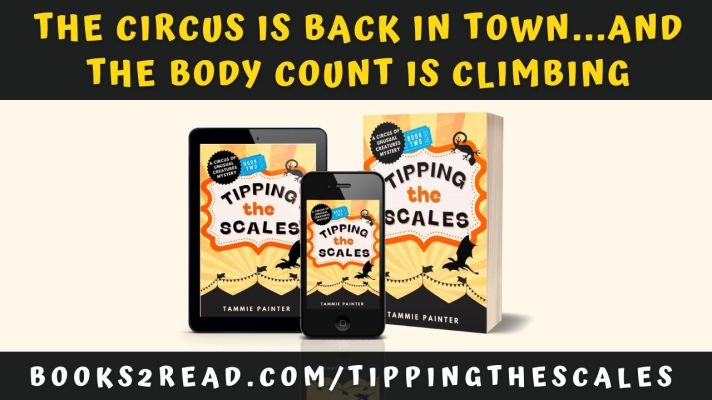 So, you’re ready for a little taste of Tipping the Scales?

Well, I’m glad to tell you that taste is strawberry-flavored.

No, I haven’t figured out how to create an incredibly realistic virtual reality experience for my books, but you’ll soon get the idea.

As a little background note for this prologue, it was inspired by true events.

If you recall from Hoard It All Before, the inspiration for this circus-centered series was the story of Tusko the elephant.

Apparently, Slim (Tusko’s handler) would occasionally walk Tusko from show to show if the shows were close enough.

People would consider it an honor to have the giant elephant spend the night in their fields, but I began to wonder if they’d be as thrilled if those fields were filled with crops. Especially a strawberry crop.

And that’s was the launching point for the opening scene of Tipping the Scales.

If you’re read for some fruity fun, here you go…

Lying flat out on my belly, I stretched my legs, then my wings. Something mooed in the distance. Okay, well, not ‘something.’ At first guess, I’d say it was a cow.

Or it could have been the human snoring next to me.

Which she had been doing all night, mind you.

DUNCAN: No, of course not. It’s just the gentle murmurings of your slumber.

DUNCAN: Murmurings that I believe were responsible for a few reports of earthquakes in the vicinity.

Still, despite the noise, it felt amazing to sprawl out as I slept, to have the stars winking at me when I opened my eyes in the middle of an early summer night, and to perform a full-body stretch first thing in the morning.

That’s not to say my caravan isn’t adequate, but in a traveling circus there’s only so much space you can provide a dragon — even a dragon who can reduce himself to the manageable size of a Clydesdale stallion.

From the direction of the mooing, a man began cursing.

And no, I don’t know why all my lovely stories have to start with a human cursing.

“Get off my bleeding strawberries, you great lump of a lizard!”

Mr Furious Farmer didn’t actually say bleeding, but I’ll leave it to you to fill in the angry swear word of your choice.

“Wuz goin’ on?” she mumbled as bits of hay poked out from her short auburn hair.

“You best not have ruined the snarking tomatoes!” shouted Mrs Furious Farmer — again, using something a little saucier than snarking.

Cordelia got to her feet, squinting in the direction of the farmhouse. She might not have fully knocked the sleep out of her eyes, but that didn’t stop her from yelling back at the couple.

“You know, there was a time people might have been thrilled to find a dragon in their strawberry field.”

Which to me sounded like the perfect song lyric for a wandering minstrel to put to a tune. But it had been at least five hundred years since minstrels wandered around singing tales of dragons in strawberry fields. A shame, really.

I thought it might be time to show Mr and Mrs Furious Farmer exactly which dragon was gracing their strawberry patch. I stretched again, then stood, increasing myself to my full show size and doing my best not to crush any strawberries as I did so.

“Holy corn cobs,” muttered Mr Farmer, not loud enough for Cordelia to pick up, but one of the benefits of being a dragon is having a keen sense of hearing. “Is that—?”

At the sight of full-size me — imagine a winged reptile as tall as a giraffe with the bulk of a gorilla — Mrs Farmer’s jaw had fallen open. It worked itself a few times, as if not quite sure closing was appropriate in the circumstances.

Finally, she got her gob shut, swallowed hard, then said, “Brutus Fangwrath,” in a tone of such awe it brought a delighted smile to my lips and sent tingles along the spines that run the length of my back.

Mrs Farmer might have been in awe, but Mr Farmer was reaching for something stashed behind a rocking chair on the porch.

Knowing how much humans love things that go Boom!, I had a sneaking suspicion of what he was reaching for. Unfortunately, as a dragon, I’m not supposed to speak to humans, and shouting “Run!” would have broken the No Speaking Rule of 1274.

“Um, Cordelia,” I said, doing my best not to move my lips, “maybe now’s a good time to tell them we aren’t here to eat them.”

“Oh, right.” To Mr Farmer, who had been trying to tell his star-struck wife to get inside, Cordelia shouted, “It’s okay. I’m his handler. He’s under my control.” Out of the side of her mouth she whispered, “Maybe not being the size of an African elephant would help.”

“Good point,” I replied while maintaining my grin.

“And stop smiling. The sight of your fangs is doing nothing to keep his trigger finger from blasting us into last week.”

As I pulled myself back down to my smaller size, Cordelia flourished her hands at me to make it look like she was in charge of the transformation.

“See? Perfectly tame under my power.” I groaned at her showman’s boast. “Did you want to pet him?”

“Seriously?” I grumbled under my breath. “I’m not part of the petting zoo.”

Mrs Farmer started forward, but Mr Farmer snatched her hand and pulled her back. Warily, he said, “We’re good. Thanks for showing him to us, but you best move along.” With the barrel of his shotgun he indicated the road in the distance.

“Just a few miles down the main road. If you tell him you’re friends of Cordelia Quinn, he’ll let you in for free.”

“Oh, Zin’s just going to love that,” I whispered. Cordelia elbowed me.

“Golly, that would be a real treat. Did you hear that, John? Free tickets to Zinzendorf’s Circus—”

“Yeah, yeah, of Unusual Creatures. Lord knows I hear you going on enough about that damn show. Suppose I gotta buy you popcorn and you’ll want to play…”

Even I didn’t catch the rest of Furious Farmer John’s griping as he steered his wife back into the house. Before he closed the door, she turned around and waved at us enthusiastically, then called out, “And take as many strawberries as you like.”

To which her husband barked that her dragon fancy was going to bankrupt them both.

The door slammed shut. It was time for me and Cordelia to join up with the rest of the troupe.

After a strawberry breakfast, of course. 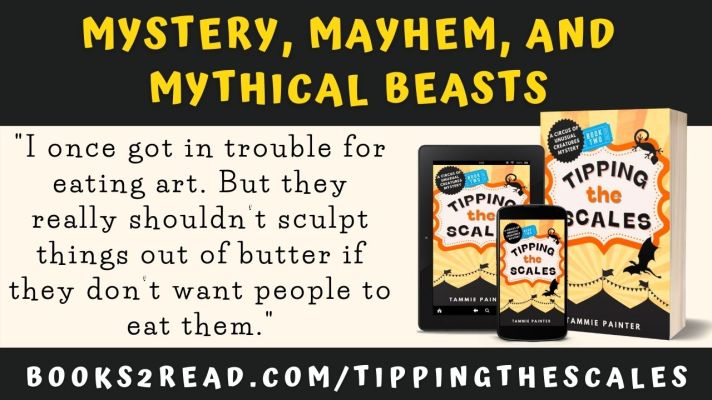 I really hope you enjoyed this sample chapter.

Tipping the Scales comes out 7 June!

Of course, you could wait to buy it then, but if you pre-order a copy today, the rest of Duncan’s tale will be hanging out waiting for you the moment you wake up on Release Day.

And really, who wouldn’t want a dragon eagerly waiting for them at the breakfast table?? (Since it’s Duncan, I do recommend you have omelets planned for that morning’s meal).

If you like humorous cozy mysteries that mix in mythical beasts with the murderous mayhem, you’ll love Tipping the Scales.

And if you haven’t started the series yet, don’t forget to pick up the first book in the Circus of Unusual Creatures seres…

Hoard It All Before 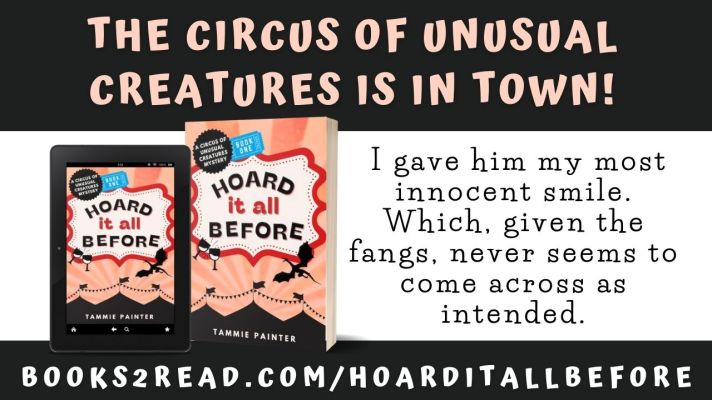