This week, we’ll take a little break from the Dutch Diaries because it’s time for me to gush about my favorite books from last month.

Don’t worry, I’ll be jumping back on the windmill next week!

Note: If you want to catch up before then, here’s Parts One, Two, and Three

Okay, on with the book gushing!

I don’t know about you, but for me, October was a wild ride of reading.

I’m not sure if it was the looming spooky event (that would be Halloween, not the US elections), or if it was just a reading mood I was in, but I was craving some thrillers to fill out the bulk of my reading this month (I don’t mind horror, but I like dark thrillers a bit more).

So, I scoured the library catalog and nabbed several thrilling bits of fiction to suit my fancy.

A couple turned out to be a absolute duds (Nine Lives by Peter Swanson, and The Last Daughter of York by Nicola Cornick), but the rest made picking a top three for October a nice challenge.

But the decision has been made, so without further ado, here’s my top three favorite reads that rounded out my thrilling October.

The Turn of the Key by Ruth Ware (Audiobook) 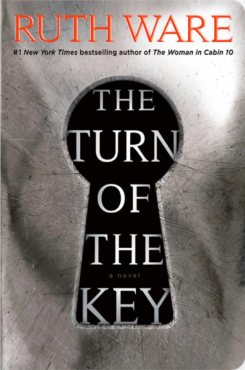 An absolutely creepy psychological thriller. And the end… talk about a hit to the gut.

Rowan applies for and gets a nanny job at a remote manor in the Highlands. When she shows up for work, she’s barely introduced to the kids before the parents hightail it on a business trip. The kids are a handful, there’s weird noises at night, and the “smart” home technology is not user-friendly.

It’s pretty much a classic gothic novel situation, but with a modern twist.

From the start you know one of the children under Rowan’s care has died. She’s in prison and is writing to a lawyer in a last-ditch effort to be taken seriously and plead her innocence. However, throughout the book, you also know something is off about Rowan. She makes vague references to problems in her past, she repeatedly says she “had to” work for this family, etc. The question looms of whether she’s really innocent, which child dies, and what is really going on with this damn house.

I listened to the audiobook of this, so I’m not sure if I’d feel differently about the “eyeball” book version, but I truly felt creeped out by the house and the kids, and felt for the character of Rowan. Her utter fear, her determination, her frustrations with the kids and the houses’ damn overdose of technology, and her exhaustion all made me sympathize for her. She’s in no way weak. I mean, there were several times I would have been fleeing from that house (or at least cutting the electrical mains to turn off the “smart” features), but Rowan sticks it out.

And then there’s the end. I honestly can’t say anything about it, but it plays into Rowan’s character and all that has been set up in the book perfectly.

Because this books was so great, I also ended up reading (listening to) Ware’s book The Death of Mrs Westway. While not as good as this one or The Woman in Cabin 10, it was still a terrific, eerie tale.

I don’t know any other way to describe this book but to say “compelling”.

The story is set in a world where every person is two people: one that lives in the day, and one that lives at night. The two know kind of have a sense of what the other is like, but they lead completely separate lives.

And the setup is that Special Inspector Morden (a night person) has been called in to inspect why a boy in prison has just ripped his eyes out…and why there are teeth growing out of the sockets. Morden is a witch hunter by night and a musician by day, and he’s sent off to hunt down a witch who he thinks has just begun a dark ritual that could destroy the world.

I found the concept of the day-night thing fascinating and it’s watching this play out that was possibly the most interesting part of the book for me. That’s not to say the story isn’t good, but the solution seemed obvious fairly early on, and some parts toward the end were a tad confusing.

Still, Towsey’s writing was superb throughout. It’s a slow-paced novel, but the almost-hypnotic way he writes just kept pulling me from page to page. His ability to set the eerie tone of every situation the Inspector finds himself in hit just the right mark without being overdone (most of the time), and that hitting-the-right-note talent really showed when he switched between the story being told through the night version of Morden and the day one.

I can’t think of anything to compare this to because it was so utterly unique. If you like slow-build mysteries with a dark fantasy element to them, give this one a go.

The President’s Daughter by Bill Clinton and James Patterson (Audiobook)

I’m almost embarrassed about how much I liked this rip-roaring novel. I was looking for a thriller, and having enjoyed Clinton’s and Patterson’s previous collaboration (The President is Missing), I thought I’d give this a try.

The basic premise is President Keating has ordered an assault on a terrorist compound, ends up killing the terrorist’s family, and as a result loses the next election to his back-stabbing Vice President. The ex-president then moves to New Hampshire and, just after receiving warnings he’s a target of the terrorist he failed to take out, Keating’s daughter Mel is kidnapped. The rest of the novel revolves around Keating battling both enemies within the US (his former VP is absolutely wicked) and without to get his daughter back.

This was a wild ride, and there are some moments (especially one…you’ll know it when you get to it) that are an absolute punch to the gut. There’s plenty of action, but it’s balanced nicely with tender moments between the president and his wife, political intrigue (both domestic and international), and a few decent twists. I especially liked how Mel was not portrayed as a helpless victim. She proves to be a tough cookie who uses everything she’s learned from her dad’s Secret Service guys.

Anyway, slight annoyances aside, I could not stop listening to this audiobook and would recommend it to anyone looking for a rip-roaring thriller with political backstabbing and characters you want to root for.

What about you? What did you read in October? Anything good? Anything great? Anything you’re embarrassed to admit you enjoyed? Reply and let me know!

If You’re Still Looking for Something to Read…

I’ve got loads of Freebies, Binge-Worthy Fantasy, and Tales of Gods & Goddesses for you.

It’s been a while, but I’ve thrown my hat into a few bundles this month.

And by “hat” I mean my books…because putting a hat into a bundle with other people’s hats is nothing but a good way to get lice.

The trio of bundles below both feature books (not hats) by indie authors like myself. Even if you don’t purchase anything, it’s a BIG help for you just to gander at what we’re up to in the indie writing world.

So, please do check the three collections out (just give the images a tap and you’ll be whisked away all the reading wonders)

Note: That first one says it’s epic fantasy, but it actually features a wide variety of fantasy sub-genres.

Have a great month of reading, everyone!!!

Tell me all about it.... Cancel reply