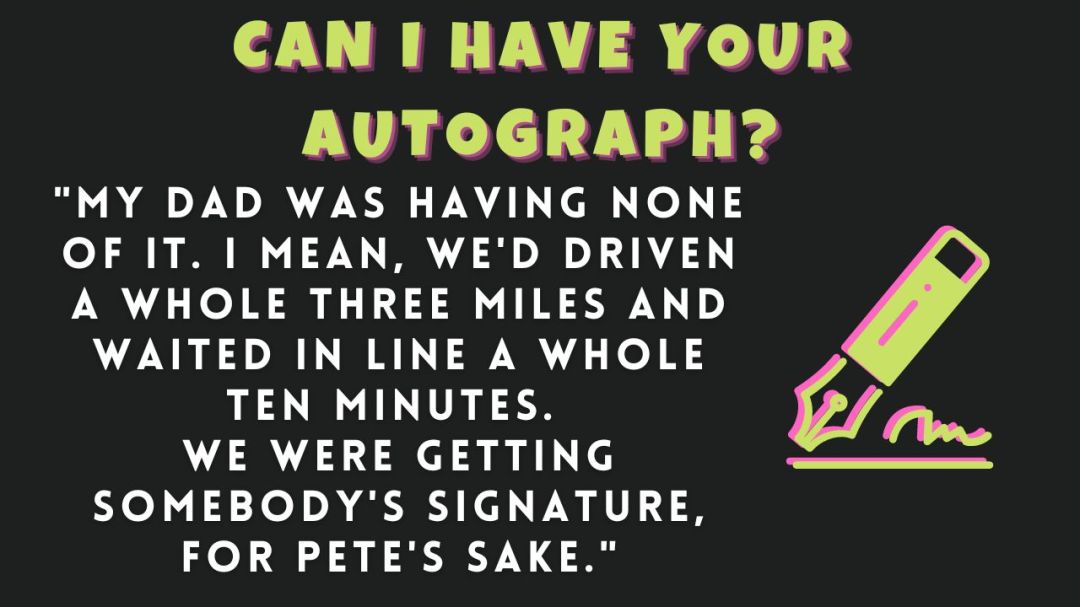 Can I Have Your Autograph?

So Mr Husband and I were on a walk a few weeks ago and we got to talking about weird things people do.

Which, yes, is most things.

And one of the things we decided was weird was collecting autographs.

I mean, it’s a little weird to go around begging someone to scrawl their name on pieces of paper, perfectly good album covers, or, well, body parts (cringe).

But then I realized I really couldn’t call autograph hounds weird.

After all, several years ago, we’d gone to see a lecture by Christopher Hitchens. After the lecture we saw the man himself loitering behind the building smoking a cigarette (one reason Hitch is no longer with us).

And well, I kind of sort of confessed to Mr Husband that I’d wish I’d gotten his autograph when he saw us and said hello.

It’s a completely bizarre thing to do or to want.

But maybe I couldn’t help it. Maybe I have to blame my dad for this signature seeking behavior.

When I was a kid, my dad was all keen on going to this local appliance store where a celebrity would be signing autographs (or maybe my mom was trying to get us out of the house).

I didn’t want to go. I mean, this was probably Saturday morning and there were cartoons to watch, damn it!

But off I was dragged.

Who were we meeting? Hold onto your celebrity-adoring hats…

Sorry, did I just overwhelm you with celebrity-ness?

Okay, so it wasn’t the biggest star in Hollywood, but I liked Happy Days, I liked Big Al (he’s the first guy who ran the diner, in case you’ve forgotten), and well, I had no choice but to get in the Toyota hatchback and go meet this guy.

As you can imagine, there was NOT a line out the door.

And then we soon found out why.

Big Al was pulling a no-show.

I guess the appliance store scene was too hip for him.

But the appliance store didn’t want to disappoint, so like a human bait-and-switch they’d brought in someone else: Arnold (he’s the second guy who ran the diner in Happy Days).

Arnold? Who the hell was Arnold?

Okay, I kind of knew who Arnold was. But he’d only been on the show for a few episodes here and there. He was a nobody.

This was no substitute for Big Al!!

But we were already there, we didn’t need a new fridge or washer, so we might as well get in the line of five people.

In very little time, we were next.

And then I panicked.

Don’t ask me why. I was a weird little kid who got really freaked out when it came to meeting new people.

Needless to say, I wanted to get back in the car. I didn’t want to be in that damn line. I wanted to go back to the safety of my cartoons!

My dad was having none of it. I mean, we’d driven three miles and waited in line a whole ten minutes. We were getting SOMEBODY’S signature, for pete’s sake.

It was my turn.

I mumbled a Hello (mostly to the floor).

Arnold, obviously seeing I was a freak, told me I had nothing to worry about, that I just needed to think of him as Santa Claus.

Okay, this guy was NOT Santa Claus. Even as a kid, I could figure that one out. I mean, he he was skinny, he had no beard, and he was Asian. This was way back when when all Santa were old white guys, so I wasn’t about to be fooled.

Still, this guy was pretty nice. He was friendly. He was taking a fair amount of time to calm down a weird little kid.

And he was having to sit in some damn appliance store on a Saturday morning, signing HIS autograph on a picture of someone else (see below).

Plus, he cared enough to spell my name correctly on the autograph (people misspelling my name is a slight pet peeve of mine)

What a guy, right?

It was only years later when i really realized who this Asian Not-Santa Claus was.

Yes, Mr “Wax On Wax Off” Miyagi from Karate Kid.

And I still have his autograph.

Why did I keep it all these years (in a frame, no less)?

I have no idea.

Just like I had no idea why I wanted to run over and ask Christopher Hitchens for his autograph in a dark alley.

As I said, people are weird. Myself included.

Do you collect autographs? Have any that you brag about? Any you kick yourself in the butt for not getting?

I just finished watching the first season of the BBC’s The Detectorists, featuring Mackenzie Crook and Toby Jones

It’s a show about two best friends who spend their time with their metal detectors collecting junk and looking for treasure, but it’s also a show about so much more while still being humorous.

Plus, it’s got the best theme song, ever!

So, if you’re looking for something to watch, be sure to check it out.

18 thoughts on “Can I Have Your Autograph?”