Skip to content
December 4, 2021 TammiePainter Circus of Unusual Creatures, In the Garden

Refusing to Give Up

Yes, I’m a few days late with this week’s post, but it’s been a crazy wacky week…more on a bit of what that was all about at the end.

Now, that post title might lead you to believe this is a self-motivation type post or some feel-good piece about not letting the bastards getting you down.

It’s not. It’s actually about some serious self-delusion going on in my neighborhood and my garden.

See, there’s some plants around here that haven’t quite gotten the message that winter is coming (sorry, had to do it) and are blooming their little petals off like it’s still summer.

Wait, maybe they’re not self-deluded. Maybe they really are not letting the bastards of autumn get them down. Maybe this really is a post about self-motivation.

Or maybe it’s just me showing off some flowers that caught my eye.

Either way, I’m sure they’ll add a bright spot to your day, so how’s that for a feel-good post!

And now… The Confused Plants…

First up we have my very confused honeysuckle that is just strutting its stuff like it’s still bikini weather.

And my fuchsias are bursting with summer color…after forgetting to burst with color all summer. Who knows, maybe they lost their appointment book.

A few clusters of white cosmos started blooming a couple weeks ago. Still, at least they’re trying to look a bit wintry.

However, my zinnias and calendula simply won’t stop blooming. Talk about overachievers!

And then you know that person who shows up WAY too early for the party? Well, that’s my bergenia, which really shouldn’t be popping with color until February. She just better not start complaining about why the snacks aren’t out yet.

But it’s not just my garden where the self-delusion is happening. It’s all over the neighborhood. Take for instance this rose. I mean, this thing is clearly just a big show off.

There’s also some lovely clumps of heather that are blooming like there’s no tomorrow. Wait, do they know something I don’t? 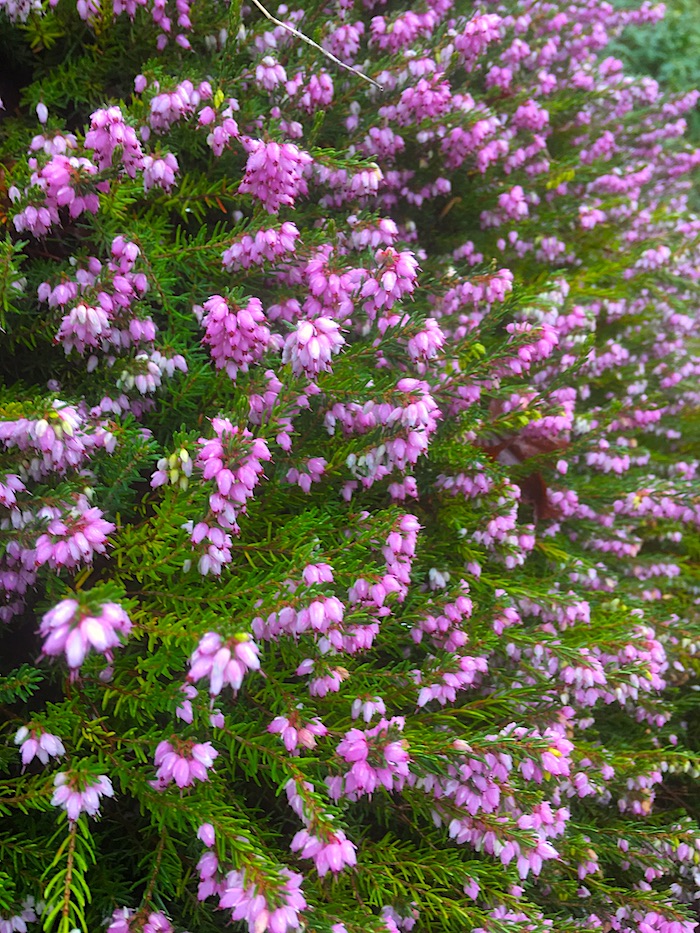 And finally, a very “autumn” looking picture, but I’m pretty sure Queen Anne’s Lace is normally only being worn by true fashionistas in the summer. Oh well, maybe this one is trying to start a new trend.

What’s still blooming in your garden/neighborhood? Or what’s showing its colors early? Before you answer, though…

Time for A Bit of Self-Promotion

Part of the crazy busy wackiness earlier in the week was getting everything finalized for the release of my next book Hoard It All Before (a humorous cozy mystery with a sleuthing dragon).

This included finishing up the final proof, nudging the colors on the paperback cover just a tad, and getting all the files uploaded (ugh).

Which means….the e-book is now available for pre-order on most major retailers (some places may even have the paperback, but that typically takes a bit longer to start showing up).

Here’s the cover, the description, and a handy dandy little link if you’re eager to be the first to get your copy on release day (18 Jan 2022).

Like any traveling circus, Zin’s has hair-raising acts and fried food on sticks. But it’s also got an aura-spotting centaur, a chain-smoking unicorn, and an omelet-addicted dragon.

Oh, and a body in the center ring.

Duncan — aka “Brutus Fangwrath, Deadliest Dragon in the West” — wakes one morning to find his best friend isn’t just sleeping off a hangover. He’s been murdered.

Suspicion for the crime quickly turns to the circus’s new hire, Cordelia Quinn. After all, she’s got motive, she got means, and she’s got loads of circumstantial evidence stacked against her.

When it looks like no one else is going to step in to help Cordelia, it’s up to Duncan to unravel the case, prove Cordelia’s innocence, and uncover a troubling secret along the way.

As soon as he’s done with his omelet, that is.

Set in a 1930s that’s just a tad different than what you’re used to, Hoard it all Before is the start of a delightfully humorous mystery series with plenty of tantalizing twists, a troupe of quirky characters, and death-defying feats both in and beyond the big top.

If you like paranormal mysteries like those by Kim M. Watt and C.K. McDonnell that mix laughs in with the murderous mayhem, you’ll love Hoard it all Before.

Hoard it All Before comes out 18 January. Pre-order your copy today!!

5 thoughts on “Refusing to Give Up”