What!? Another month gone already? I keep looking at the calendar and calling it a liar, but I also do this with the bathroom scale so now they’re having a competition as to who can be the Champion of Tammie Torment.

This month, I’m doing a little something different…a video reading round-up! I had planned on doing individual video book reviews, but it’s been weird month all around, so a few plans got tossed into the It Seemed Like a Good Idea bin.

But, just in case you don’t want to watch the video (the sight of me can put your off your lunch, so I understand), I’ve also included the books I’ve enjoyed this month below. Or rather tried to enjoy. As I said, it’s been a weird month.

Alrighty, so here’s the video. Don’t worry, I don’t go over every single book I read this month, just a few highlights…and one very low lowlight.

Breaking the Lore by Andy Redsmith – A good story with a humorous start and loads of quirky, magical creatures. I enjoyed everything that was happening in the story and the descriptions were vivid, but the events just started to seem like strings of stuff the author wanted to put in a novel rather than a well-connected, tightly plotted tale. Still, a fun enough read for fans of Ben Aaronovitch.

What Abigail Did Last Summer by Ben Aaronovitch – OMG! I loved this. Of course, i don’t think I’ve ever read anything by Aaronovitch that I didn’t like. I gush about it in the video. 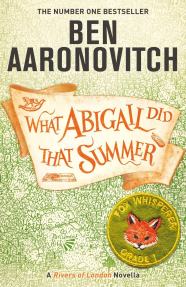 The Story of Kao Yu by Peter S Beagle – This was simply a wonderful, well-told short story of duty and loss. Kao Yu is a judge/administrator who travels around hearing cases. Because he’s always been an honest and good man, the chi lin (a Chinese version of the unicorn) comes to him and, um, “assists” in his cases in which some people need to be judged a bit more harshly than others.

When Kao Yu is called to a case he feels could have been handled locally, everything changes and he has to decide whether to remain good and just, or to be self-serving.

The ending is just heartbreakingly fantastic. Plus…it has the best cover of all the books I read this month : ) 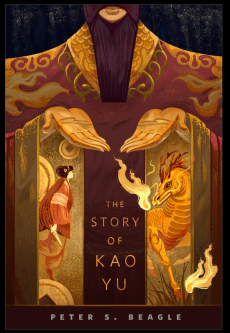 American Gods by Neil Gaiman (audiobook) – I’ve been on a serious Neil Gaiman kick lately and have loved each and every one so far, but just couldn’t get into this rambling tale.

European Travel for the Monstrous Gentlewoman by Theodora Goss (audiobook) – I absolutely adored the first book in this clever series. This one started off just as great with plenty of humor, captivating characters, and an intriguing premise. But then it just kept going. And going. And going. The humor started getting repetitious and the characters began feeling entirely flat. I’m unsure if I’ll continue with the series after this one.

The Terra Cotta Dog by Andrea Camilleri (audiobook) – An easy read (or listen) and another fun escape to Sicily with Inspector Montalbano.

The Light Ages by Seb Falk – I heard about this book on a podcast and it sounded amazing. A history of scientific innovation during what we call the Dark Ages, I just couldn’t get through the seemingly unfocussed journey. I am currently trying it on audiobook to see if I can absorb it a bit better, but….

I cover each of these in the video.

Batman: The Killing Joke by DC Comics – Wow! All I can say is wow. The art. The story line. The twist at the end. Wow.

Le lagon de Fortuna (Carthago, #1) by Christophe Bec – I think this may have been the worst thing I’ve read, or will read, this year. The art is lackluster, and the story bounces between so many different places and times, I never knew if I was coming or going. And I use the term “story” very loosely…it’s more just a series of scenes that just barely tie together. But I did learn some new French vocab, so there’s that.

Boulevard des Monstres by Paul Jenkins – I loved this! This was just an amazing story. There were a few scenes that felt like fluff and didn’t really do much for the story, but overall, it was a tightly plotted tale that was full of adventure, a bit of mystery, and plenty of tongue-in-cheek jokes.

And the art! There is so much to look at in each panel…in a good way. It never seems cluttered, but there more you look, the better it gets. The action scenes do pare down to focus the action, which is a terrific move.

Even better? I now know the French words for “poop” and “bugger” Very important vocab to have in my arsenal : )

What did you read this month? Any gems I should try out? Any you hated and want to warn me about? Pop a comment in the box below and let me know!

Note: the book links above are affiliate links. If you click on them and do any shopping, it costs you nothing extra but I do get an itty-bitty commission to help keep the cats from devouring me alive.