Break out the bubbly because it’s finally time to say…

Ugh, and what a slog it’s been to get to this day.

As some of you know, I had planned the release of this book for last fall, but I think we can all agree that no one’s plans for 2020 panned out quite as they should have.

I’m glad I waited, though. Working through the trilogy as a whole has really brought a nice cohesiveness, consistency, and, and, and, argghhhh, I can’t think of another suitable word that starts with CO. Colorado-ness? No, probably not.

Anyway, the series is far stronger thanks to the delay and I’m thrilled to get the first installment out into the world.

Okay, let’s get going with this launch, let’s look at what readers are saying, let’s get you a sample chapter, and let’s make sure anyone new is brought up to speed…

Let’s Get This Out of the Way

Before we get too deep into the celebrations, I need to try to sell you stuff.

To anyone who pre-ordered The Undead Mr. Tenpenny, THANK YOU! It’s always a thrill to see I have a few eager beavers out there.

For those of you who haven’t ordered the book yet, but are ready to get your copy, the links you need are right here…

These are a little more complicated because, other than Amazon, I’m not sure exactly which retailers are carrying the book just yet.

Maybe You’re Not Convinced Yet?

Okay, if you’re still not quite convinced this book is for you, perhaps a few comments from some delighted readers might entice you…

“The Undead Mr. Tenpenny is a clever, hilarious romp through a new magical universe that can be accessed through the closet of a hole-in-the-wall apartment in Portland, Oregon.”

“When I saw the book title…my first thought was, “another zombie apocalypse”. A wonderful surprise greeted me with an entertaining story that was written with humor, a great story line and new twist on the undead.”

“Man oh man, did I love this book! …The plot was great, and got even better as things progressed…. I think the biggest pro of this book is the characters.”

“…a fun and entertaining read. Great wit too.”

“Wow and wow again! I absolutely loved this book! You get such a feel for the characters and the story is so fast paced you don’t want to put it down.”

There’s three ways to learn more about this book: You can peruse the description below, you can read a sample chapter (also below), and/or you can watch some goofy videos.

For the goofy videos…

If you haven’t caught the first two parts of “The Undead Mr. Tenpenny Book Launch Video Extravaganza”, here’s your chance. More parts are coming soon, and I know you’d really hate to get behind on the show, but I refuse to be held responsible if you lose your lunch at the sight of me.

If you’re looking for that description…

Work at a funeral home can be mundane. Until you accidentally start bringing the dead back to life.

Just when Cassie believes she has the problem under control, the recently-deceased Busby Tenpenny insists he’s been murdered and claims Cassie might be responsible thanks to a wicked brand of magic she’s been exposed to. The only way for Cassie to get her life back to normal is to tame her magic and uncover Mr. Tenpenny’s true killer.

If you like contemporary fantasy with snarky humor, unforgettable characters, and paranormal mystery such as Ben Aaronovitch’s Rivers of London series, you’ll find it hard to pry yourself away from this first book of the Cassie Black Trilogy.

And Finally, Here’s a Quick Excerpt… 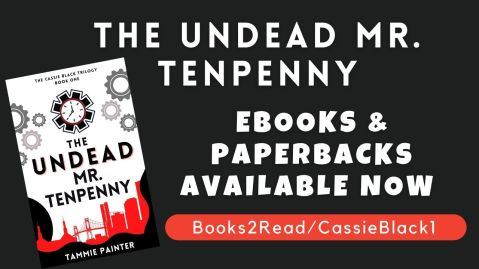 More Fun for the Week Ahead….

Daily details of what’s in store….

2 thoughts on “It’s Release Day for The Undead Mr. Tenpenny”