Domna Has A Whole New Look for Fall

Well, just like the models slinking across the runways, my historical fantasy novel Domna has donned a whole new look for fall….and an amazing sale to launch into that new look.

Of course, she’s not the only one showing off. Resident monster Finn McSpool has been over on Instagram lately showing off his floral fashion prowess and his trendsetting, um, mayhem.

But back to Domna

You may remember the old covers for this serialized novel… 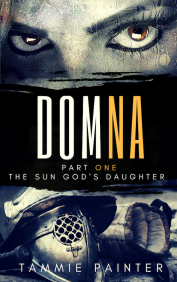 I liked the cover when the book came out, but I always felt it lacked a little punch, and unless you read the titles, it didn’t quite convey the fantasy side of the book (even though the fantasy element is pretty light in this tome…except for the centaurs, gotta love those centaurs :)) ).

As such, I’ve been wanting to create a new cover for a while. I had a few ideas, but most still only looked like straight-up historical novels. Then last Friday I was poking around looking at some stock photos, and Holy Serendipity, Batman! there it was….

I mean seriously, does it get any better? This photo exactly fit the genre, fit the tone of the novel, had a mild fantasy element to it, it had Greco-Roman temple ruins (which play into a key scene toward the end of the novel), AND even had the color scheme I was after.

Trouble was…Sofia Domna has dark hair, not blonde. Haha, a little coiffure conundrum can’t stop me! That’s what zooming in and cropping are for!!

I played around a little with the typesetting, but decided to stick with the original font, although I did give the subtitles a bit more oomph. I also adjusted the colors to boost the intensity.

Anyway, here’s the result (I’ll just use Part One as an example)… 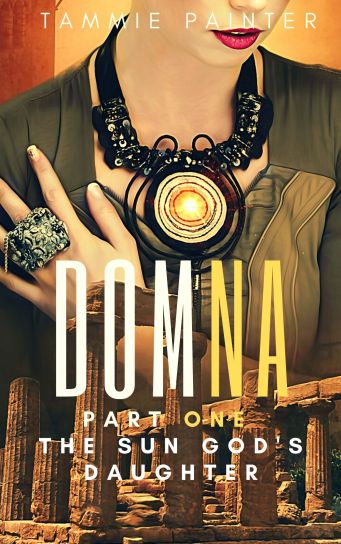 Okay, yes, all six parts, plus the Complete Set still have the same cover with the only difference being the title. I know I should do something to make each one a little different, but….

Anyway, hoorah!! Everything is now updated and Domna is spreading her new look across virtual bookshelves everywhere!

You can pick it The Complete Set of Domna on my Payhip Bookstore or on most major retailers for $5.99 USD. Or, if you’re not ready to commit,you can always try Part One: The Sun God’s Daughter for free on most retailers.

You can learn more about the series and see some amazing reviews below.

Have a great rest of your week!!

Domna is a six-part serialized novel. The titles include…