I just LOVE getting my grubby little fingers on new (okay, new-to-me) books! Which means now that my local library is sort of back in business, I’ve been going crazy with placing items on hold.

And by “sort of” I mean you still can’t go in and wander amongst the stacks, but you can place holds, have the magic library elves fill those holds, and then pick up your books by appointment (or in my case, have Mr. Husband bring them home since he is one of those magic library elves).

Anyway, this is the second stack I’ve cobbled together. Patience is key here since holds don’t all come in at once. As with the last pile of goodies, I have to give thanks to Tierney of TierneyCreates.com for allowing me to steal her bookish blog idea.

And yes, I have to thank Finn McSpool for his modeling work in these shots…you know, because it’s SO hard to convince him to get in front of the camera. Yeah right.

Onto the Library Stack…

Hmm…it’s kind of hard to see some of those. Let’s take a closer look.

Stitching and Being In Stitches

So those slim volumes down at the bottom are a couple issues of Threads magazine. I usually feel pretty inspired to whip out my apparel fabric after looking through this magazine, but neither of these issues did much for me. Although it looks like Finn might be contemplating that sheer-backed top. 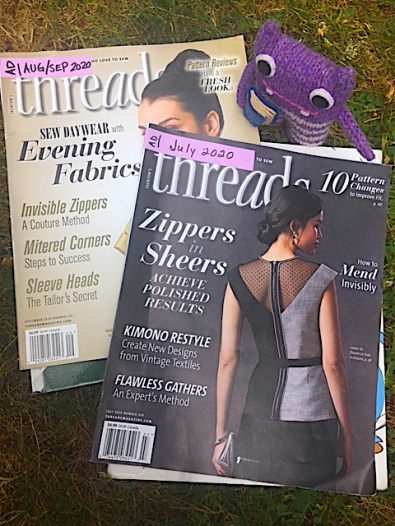 And yep, those other slim books are another couple installments of Asterix & Obelix. I’ve plodded through all the French language editions my library carries, so it’s back to English…which means I’ll be able to get through their Gaulish silliness much more quickly! 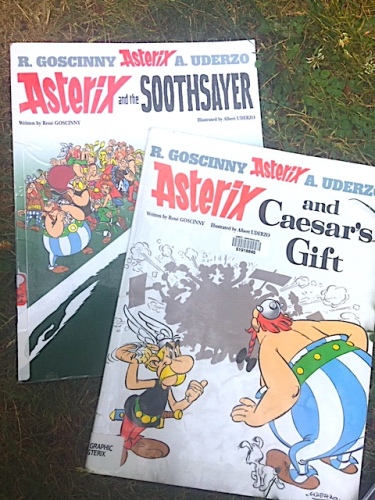 Reading My Way Across Iceland

That next book in the stack is The Darkness by Ragnar Jonasson. Set in Iceland, it’s billed as a thriller, but it’s really more of a mystery, and all I can say is WOW!!! I finished this book in record time because I could not stop reading.

The mystery element, the personal struggle the main character is going through, and the pacing were all done to a T. And the ending!! Well, let’s just say it is not your typical thriller/mystery ending. I immediately put the next book in the series on hold!

That other novel in the stack is To Have and to Hoax by Martha Waters. It’s classified as a romance, but it sounds like it’s got more of a comedy element than a romance one. I haven’t started it yet, but if it’s any good, I’ll let you know…of course, if you’ve read it, tell me how you liked it.

Every now and then I need a break from fiction. Right now I’m reading that next book in the pile, Fundamental: How Quantum and Particle Physics Explain Absolutely Everything by Tim James. It sounds dry and dull science, but it’s full of super groan-worthy dad jokes, so it’s proving itself a fun read so far. 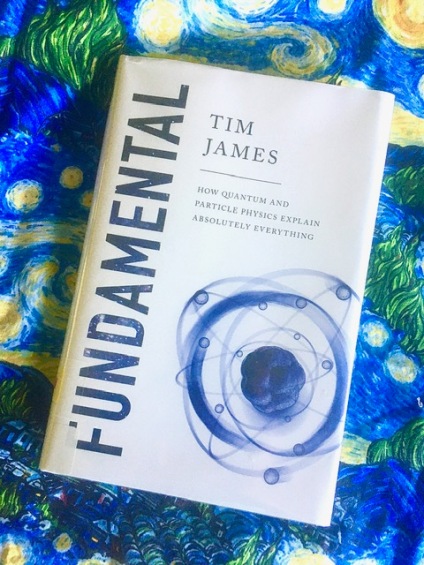 That other non-fiction book, London Under by Peter Ackroyd, was not fun to read. And I love reading most anything about London, so that’s really saying something. It just felt like a mashing together of underground bits of London without really explaining any of them in any detail, so I gave up after about twenty pages.

Yep, the virus is still running rampant in the US, so as with my last stack, it still looks like travel books are the only way I’m going to be doing any sightseeing (or escaping this country) for the foreseeable future. Even Finn is looking a bit wistful…

The Red Pill or The Blue Pill?

It’s not just books and magazines I’ve been hunting down in my library searches. Mr. Husband and I have gone through A LOT of movies over the past several months. Some have been fairly new releases, others have been classics, including our most recent viewing of The Matrix.

The movie has aged amazingly well and just never gets old. The only problem…Finn now thinks he’s Neo and has been trying out some of the moves from the flick…

Tunes to Write To

Coming to the top of the stack we find Hozier’s album Wasteland Baby. Holy bass notes, Batman! I cannot get enough of this CD and have now decided I like it even better than his first album, which I didn’t think was possible.

I’ve been cranking it up during every writing session and listening to it over and over as I work on my latest draft. Now my brain seems to expect the album to be on to get any writing done.

Ah well, there’s worse things you can train your brain to expect.

Alright everyone, that’s the top of the stack. Now it’s your turn…

What have you been reading/watching/listening to lately? Are your libraries open? Are you making use of them if they are? Be sure to share your comments below!

Note: The book/movie/CD links above are affiliate links. If you buy anything after clicking the link, I get a small commission. It costs you NOTHING extra, but helps support this blog. Thanks!