This poll is now closed…if you’d like to see the (contested) results, you can find them HERE.

Since you fine folks did a wonderful job at helping me pick the cover of my short story A Feast for Sight (which you can get for free by joining my newsletter team), I thought I’d use your powers of decision making to help me again.

First though, that new cover is doing wonders. I’ve had a nice increase in subscribers over the past several weeks I’ve been using it. So, THANKS for your input!!!

Okay, now let’s get you set up for the survey.

This is a humorous short story set long ago in Ireland (maybe 500 CE). It centers around the legend of the Dullahan, the headless horseman who brings death by riding around on his black horse and calling out the names of those who are about to die (I know, rip-roaringly funny, right?).

Anyway….his horse is Buttercup and she has ways of putting ideas into people’s heads to get them to do what she wants…which is mainly to feed her brimstone and keep the luxuriant fur on her fetlocks flowing freely.

She also wouldn’t mind if she and Dullahan were the only death harbingers on the island (seriously, the Irish have A LOT of legends about creatures who bring death). That’s right, Buttercup wants to be the Queen of Death.

With that in mind…it’s time for the covers.

I want the cover to give the idea that, even though it’s about death, it’s a light-hearted, somewhat silly tale.

The horse image in the first two covers and the first crown image are both watermarked, so please try to look past that mark. I’ve also purposely made these covers small, as they would appear on a book retailer’s website.

As you first scroll through, try to pick the one that most captures your eye. Then, weigh that initial reaction up with what I’ve described for the story.

And the covers are…. 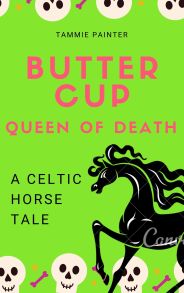 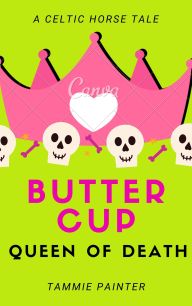 Cover D – Same cover, but with a different style of crown.

And here’s the poll thingie where you can cast your vote (if you’re reading this in your email, you’ll see a link to the poll below…just click that link to vote).

Of course, if you have any suggestions, comments, ideas, feel free to toss them my way. I can tweak most anything on these, so I’d welcome your input…and might even use it (haha).

Thanks for voting and have a wonderful Thursday!!

Now that you’ve voted, treat yourself to some binge time!!!

14 thoughts on “It’s Time for Another Book Cover Survey”