Cover Survey Results: And the Winner Is…

You have spoken…and you didn’t have to stand in a long line to make your voices heard.

Okay, it was only a book cover survey, but hey, democracy is democracy, and I just want to thank every one who voted and commented on the cover choices I presented a couple weeks ago.

In case you’ve forgotten, here’s another look at the candidates who were vying for your vote…

So, poor little Cover C got 0% of the vote. Reports are that Cover C went on a drunken bender after the results came in and I’m pretty sure his political career is over.

Cover A (which entered the race as my favorite) barely squeaked by, earning only 13% of your votes. Cover A’s campaign team refused to comment.

Cover B was a true contender with 25% of the vote, but this candidate showed her grace and class by calling to congratulate….

Cover D who, despite the watermark controversy early in his campaign, nabbed a whopping 63% of the vote and is the clear winner!!!

What’s the Winner Been Up To?

After the campaign, Cover D got a little makeover to remove those unsightly watermarks and even went into the studio to show off his new look in 3-D.

Cover D then issued a statement:

“I’m humbled and honored to have been selected to be the new face of Tammie Painter’s newsletter freebie. The fantasy story I’ve been chosen to represent is slightly humorous, slightly macabre, and has really given me a new appreciation for tasty eyeballs. So tasty…”

Sorry, um, Cover D had to step aside for a bit to wipe the drool from his face.

Anyway, I for one am thrilled with your choice. I think it looks great, the colors (dare I say) are eye-catching, and it reflects the story inside much better than the old cover. Plus, it should also match up perfectly with the whole re-branding thing I’m going to be subjecting myself to over the summer.

Take the Winner (and more) Home for Free

If you’d like to get your own exclusive copy of A Feast for Sight with its snazzy new cover, all you have to do is click HERE, enter your email, and the story will soon be yours to devour.

I’ve also revamped my mailing list sequence to include several other free goodies, so now is an excellent time to join the team. Of course, you can unsubscribe at any time.

Have a great week everyone. Thanks again for voting!!

Oh and one last thing…in case you missed it…the complete set of my six-part historical fantasy series Domna is on sale this week for only 99c.

That’s right, nearly 700 pages of intrigue, vicious ambition, betrayal, and page-turning passion can be yours for only 99c in the US, UK, EU, Australia, Canada, and New Zealand.

The sale ends this Saturday so head HERE to get your copy, or keep scrolling to learn more about the book. 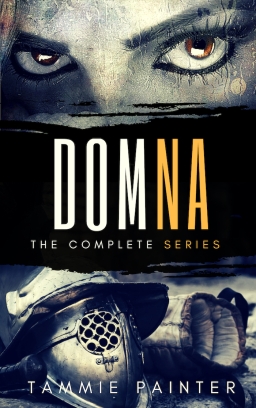 If you like the political intrigue, adventure, and love triangles of historical fiction by Philippa Gregory and Bernard Cornwell, and the mythological world-building of fantasy fiction by Madeline Miller and Simon Scarrow, you‘ll love Domna.

Pick your copy of Domna: The Complete Series for only 99c to lose yourself in this epic tale of passion, ambition, and betrayal today.

9 thoughts on “Cover Survey Results: And the Winner Is…”

Spring into some paranormal mysteries…

Dare you to beat these fantasy bargains…

Perhaps a little magic is in order…

Don’t get fooled by these mysteries…