Behind the Book: The Trojan War

In all the madness of doing the rewrite for a new trilogy, putting up with a pandemic, and keeping a monster out of my garden, I’ve completely forgotten about my upcoming book launch this month and doing any Behind the Book features for the novel I released back in March.

Anyway, to catch you up, that upcoming release is The Return of Odysseus, the emotionally-charged sixth and final installment of my historical fantasy series, The Osteria Chronicles. As you might guess from the title, the book was inspired by Homer’s mythical story, The Odyssey.

Likewise, the main story line of my previous release The Battle of Ares: Book Five of The Osteria Chronicles centers on The Trojan War, which Homer wrote about in a little tome called The Iliad.

If you’re familiar with this series you’ll know those original tales serve as a framework for my plot lines, but there’s also plenty of new stories and character development going on as well.

So, in an effort to do a little self promotion, I thought we might take a tiny step back to The Battle of Ares and see how its main plot ties in and diverges from Homer’s epic.

And don’t worry, I’ve added in clearly marked SPOILER ALERTS if you haven’t read the book yet.

The Trojan War vs. The Battle of Ares

As with the other books in the Osteria Chronicles series, although the essential story and outcome are similar to the original Greek legends, I have changed some aspects of the myth of the Trojan War to better fit the world of Osteria, the timing of the story, and the narrative of the series. 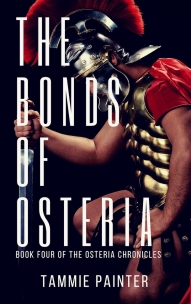 First off, the Trojan War has a LOOONNNGGG lead-up and some of that has been hinted at in earlier books of this series. For example, Paris not selecting Hera as the most beautiful of the goddesses during Jason and Medea’s wedding in The Voyage of Heroes.

Another lead-up was Odysseus’s suggestion of a treaty amongst the suitors to Tyndareus in The Bonds of Osteria.

In the original tale, Paris (of Troy) and Helen (of Sparta) do sneak off together right under Menelaus’s nose. Thanks to the treaty, when Agamemnon and Menelaus want to go to war against Troy, the signers of the treaty have to back them up. All’s fair in love and war, right?

In the legend, the Trojan War lasts nearly ten years and the gods intervene quite often. Due to the story line of the gods versus the titans in this book, I kept the gods out of the war (for the most part). And, to keep the story more concise, I trimmed the actual war down to about three months.

So how does the legend tie into The Battle of Ares? 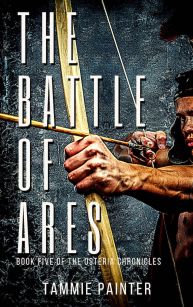 In legend (and in my book), Achilles was prophesied to be the greatest warrior of all time, and his mother, Thetis, hid him in a brothel to keep him away from the war, but Agamemnon wanted Achilles on his side and sent Odysseus to find him.

Once Odysseus found Achilles, Thetis insisted her son lead his own warriors. In The Battle of Ares, I decided these warriors shouldn’t be boring old humans, and gave Achilles a troop of centaurs, headed up by one of my favorite characters, Chiron.

Not to disregard a fair bit of the story of the Trojan War, but for about nine years, there’s just a bunch of killing, laying siege, and stand offs. Finally, in the tenth year, we get to some action. Or rather, inaction, when Achilles’s and his troops mutiny and refuse to fight.

In the hope of goading Achilles, Agamemnon steals Briseis, who in Homer’s story had been kidnapped by Achilles from her job as a priestess of Apollo, thereby putting Achilles on Apollo’s bad side.

Those of you who have read the previous books in the series, know that Briseis isn’t some wimpy little priestess, but is actually a teacher, an excellent tracker, and was instrumental in helping Jason recover from grieving caused by wicked events in The Voyage of Heroes.

Back to Achilles. He wasn’t falling for Agamemnon’s tricks. However, Patroclus (originally Achilles’s cousin/friend, but in my books it’s Achilles’s teasing nickname for Jason) disguised himself and stood in for Achilles in a one-on-one fight with Hector.

SPOILER ALERT: In the legend, Hector kills Patroclus, then Achilles goes on a rampage and not only kills Hector, but defiles his body and refuses to give it up to Priam. In case you hadn’t noticed, Achilles could be a bit stubborn, a character trait I saw no need to change in my books.

SPOILER ALERT: Eventually, Achilles does jump back into the fight. It isn’t long after this that Paris (goaded by Apollo) kills Achilles with the infamous arrow to the ankle while Achilles was grieving over the body of an Amazonian warrior he’d fallen in lust with.

SPOILER ALERT: In my version, Paris is goaded on by Ares who is angry over his side losing the war and blames Achilles for being the primary cause of that loss. Ares convinces Paris, killing Achilles will prove Paris is the hero he’s failed to prove himself to be so far. Taking a cheap shot while Achilles isn’t even armed, Paris does the deed.

In legend, Helen did help Odysseus by giving him the idea of tricking his way past the walls of Troy. Of course, this took the form of the Trojan Horse inside of which Odysseus hid his men.

The wooden horse was presented as a gift to Priam and the Trojans wheeled the thing inside Troy’s impregnable walls, and that night Odysseus & Co. left the horse’s interior to storm the city and turn the tides to win the war.

I decided the wooden horse (or a wooden bunny in the case of Monty Python) had already been seen enough times in film and literature, but I didn’t want to lose the “horse” aspect altogether.

One day the idea of using the centaurs hit me, and not long after I wrote one of my favorite scenes in the book.

That’s Not The Whole Story 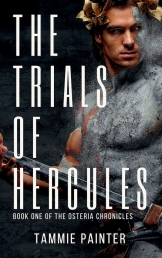 The plot line of the war takes up most of the pages of The Battle of Ares, but that’s not all that’s going on. There’s a war brewing between the titans and the gods, and the titans are slowly weakening the gods to the point they can’t fight back. This war comes to a head in The Return of Odysseus.

Another story line is that of Orpheus and Eurydice. As ever, this is one of my favorite story lines in the whole series and gave me a chance to bring back many of the characters from The Trials of Hercules (Book One), which was great fun.

And last but not least, is the budding love story between the god Hermes and the mortal Bellerophon…a relationship that gets put to a tragic test in The Return of Odysseus.

Alright everyone, if this has you curious about the books, yay! I’ve got some special going this month so be sure to check out the links below. And as ever, thanks for dropping by. 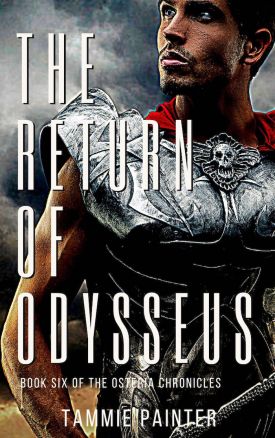 One thought on “Behind the Book: The Trojan War”