It’s finally time for Part Two, or should I say “Part Deux” of my I-don’t-know-how-many part series about my recent trip to France. I know it’s been a while since relating my misadventures in Carcassonne, but hopefully I’ll be able to churn these trip reports out a bit more regularly from now on.

So let’s get going and head to my first destination in France: Strasbourg!!

Why Strasbourg, you ask? To be honest, I originally picked it because it was an easy TGV ride directly from Charles de Gaulle airport, but the more I read up on it and after spending some time there, the more I really REALLY enjoyed the city and I highly recommend making a trip there if you can.

I’ll cover more sights and a little of the city’s history next time around, but the focus of this post is probably what draws most people to Strasbourg…its ginormous cathedral.

Oh, hold on a sec. Finn, did you want to say something about the cathedral?

-Um, yeah. Did you say ginormous? It sure doesn’t look that big to me. 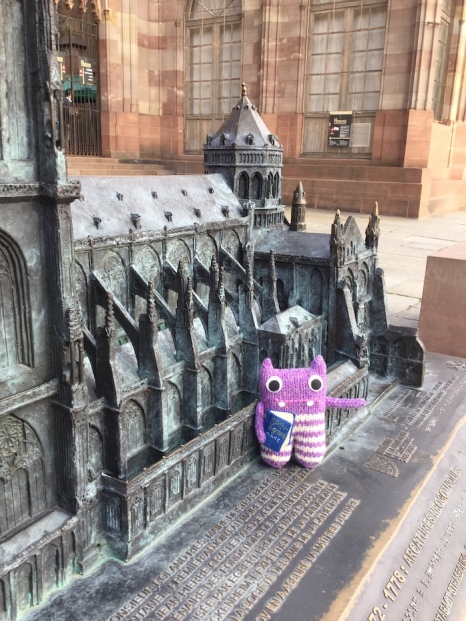 -Finn, maybe you ought to turn around.

Yes, as with most Gothic cathedrals, the one in Strasbourg is so big it’s next to impossible to get a picture of the whole facade. I don’t know why medieval architects couldn’t have taken future photography needs into consideration when they were building these things. So rude.

Aw well, we’ll just take a couple snaps of the exterior and then rattle off some stats.

Besides the obvious grandiose ooh and ahh bits like the jutting towers and flying buttresses, the exterior of Strasbourg Cathedral has plenty to gawk at.

Such as this guy, showing off a hefty dose of snippy attitude for a medieval statue…

And you can’t have a Gothic cathedral without a gargoyle… 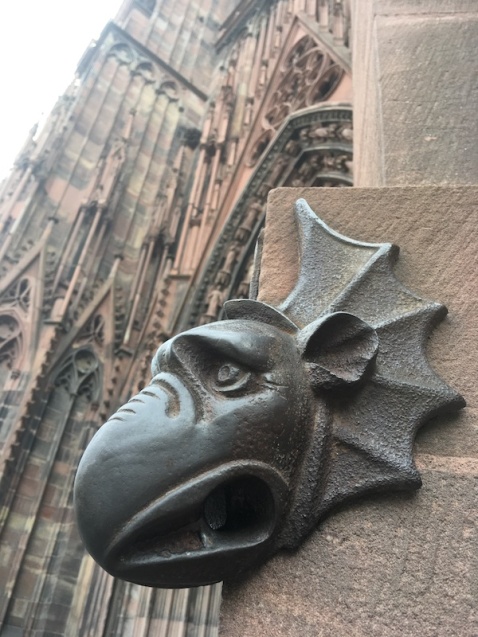 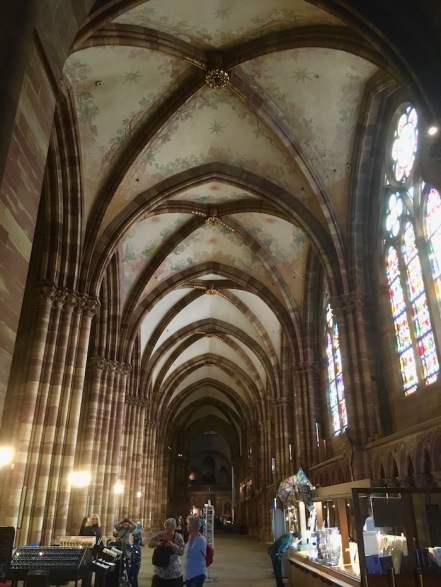 And, of course, every cathedral needs some stained glass… 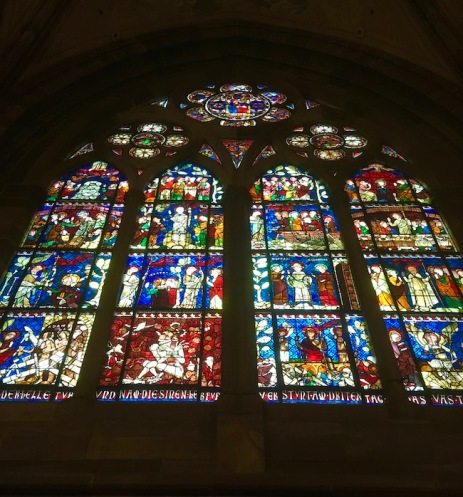 But if you look more closely, you’ll find some interesting features like this pillar of angels…

Or this cute little dog who supposedly represents the dog that used to accompany a preacher who spoke so long in the pulpit that the dog would fall asleep…the pup probably wasn’t the only one snoring….

And, well, a hanging cluster of bones, because hey, why not…

One item you won’t find in most churches is the astronomical clock (although I do recall York Minster having a small one). If you’ve never heard of one of these, it’s a confounding work of engineering and mathematics that has gears like a clock, but instead of telling time, it tells you where the planets will be in the night sky, when solar eclipses will happen, and the exact dates of things like phases of the moon, leap years, and equinoxes.

Although this kind of gear seems rather scientific to be housed within a church, it was mainly used to calculate various holy days, including the precise date of Easter which, because it was borrowed from pagan celebrations of spring, changes from year to year.

Anyway, the fine folks of Strasbourg didn’t just want any old clock, they wanted the mother of all clocks. This thing measure 18 meters tall and has all kinds of bells and whistles such as rotating figures cycling from birth (a baby) to death (a grim reaper), an automaton rooster that crows, and the changing faces of the clock itself.

The original clock was built in the 1500s, but then fell into disrepair and remained silent until 1788. But around 1838 the Strasbourgians decided they really needed to know when to start hiding their Easter eggs, so Jean Baptiste Schwilgue set about to fixing it.

He made all new mechanisms, added a few new features, and got the thing ticking and tocking again by 1842. His clock remains so accurate it loses only a few seconds a year.

The Best View I Didn’t See

You can climb up to an observation deck on the roof of the cathedral. Although I haven’t been having any problems since the Big Health Scare, I didn’t want to push my luck by climbing over 300 stairs. Mr. Husband did, though (twice!) and said the views were amazing.

The Cathedral After Hours

No, sorry, the cathedral doesn’t turn into a night club at night. However, after dark, the exterior does get lit up like a glittering disco ball.

Luckily, we were staying only a couple blocks from the cathedral so, even on tourist-weary legs, it was an easy jaunt to gaze up at this lovely view.

What about you? Have you been to Strasbourg? Do you have a favorite Gothic cathedral?

In my next installment of this sporadic series, I’ll share with you more of the history of Strasbourg, take you on a quick tour of the town, and show you my favorite place in the city. See you then!!

Maxed out your credit card already?

Don’t worry, Santa still wants you to have a little something special…but Santa’s a cheap bastard so by “special” he means “free.” There’s a gob smack of books (over 200) in this promo, most of them romance and fantasy but also plenty of thrillers, mystery, and non-fiction so click the image below and have a blast browsing!

An amazing selection of freebies and bargain are waiting to entertain you this month!