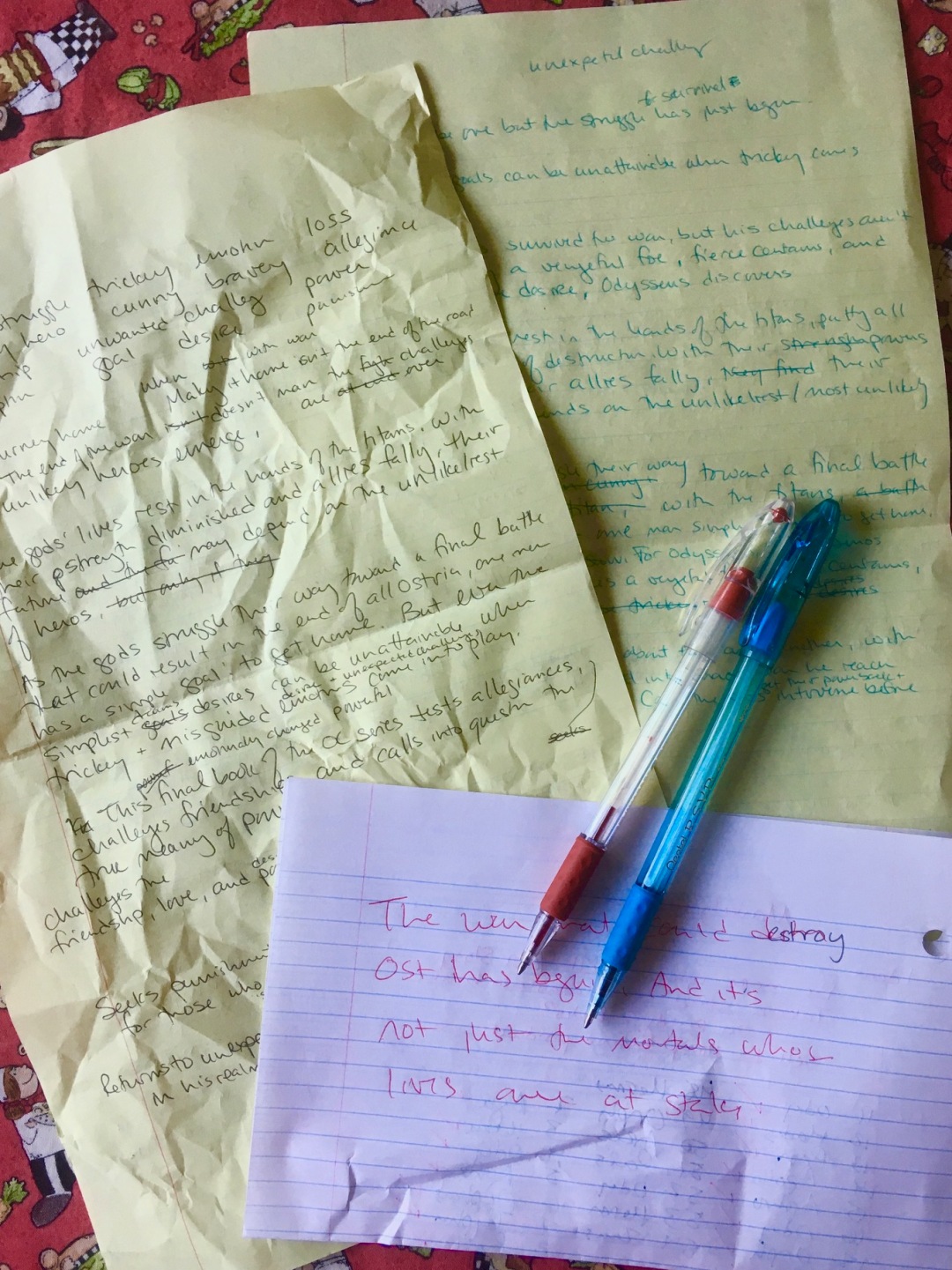 (If you don’t have time to read this whole post and only want to check out the book blurbs, feel free to scroll down to the end where you’ll find both descriptions.)

Remember how last week I was basking in the happy sunshine of having (kind of sort of) finished my next two novels? Remember when I said how relieved I was?

Well, that relief quickly ended when I realized I still had to face the most dreaded writing chore of them all…crafting the book description.

Worse still, I wasn’t just having to face this torturous task. I was having to do it for two books at once.

Why Book Descriptions Are a Challenge

For the non-writers out there, you’re probably thinking, “You wrote two 400-page books. How in the world could writing a few paragraphs be difficult?”

Um, well, you’ve got the answer right there in your question: Turning everything that happens in a 400-page book (or two of them) into a few paragraphs is a nightmare.

First off, you can’t cover everything. It would either make for a really long description or a really hurky-jerky one. Plus, who would buy the book if they knew all that happened? So, as a writer, I have to pick and choose the most striking elements (usually the premise that kicks off the main action of the book) to include in the book description.

And remember when I mentioned ALL those story lines I have in these two final installments of my series? There’s simply no way all of them, no matter how much I love them, are going to fit in my description. Again, we’re back to the chore of picking and choosing the elements that are central to the books.

Second, not only do you have to figure out what to include, you have to hone that down to the bare essence of why it matters. A story that might consume half the pages in your novel, gets maybe five sentences in a description.

Third, once you’ve kicked aside some of those favorite characters and excluded them from your little blurb party, once you’ve taken your main story that you’ve crafted with beautiful language full of rich settings and catchy dialogue and honed it into a few measly sentences, you get to make those sentences snappy and attention grabbing.

Fourth, you have to hope those snappy sentences are enough to draw in shoppers so they’ll buy your book and read all your other sentences, paragraphs, and chapters.

You can see why we writers hate this task.

I had the luck of waking up one morning with a very hook-y first line for Book Five. It slapped me in the face, I jumped out of bed and jotted it down, and it pretty much stayed the same throughout the process.

The rest of the two blurbs? Yeah, I think the muses took a Thanksgiving holiday, so it was time to work.

I started these descriptions off a little different than I normally do. Normally, I just write like mad and then chisel down what I wrote until it’s short enough for a blurb. However, thanks to those short story descriptions, I’ve learned starting with a few words helps.

So, I jotted down several keywords I thought described the various plots, emotions, and themes in the books. I only ended up using about half of them in the actual description, but just jotting these words down gave me ideas for what I wanted to include in my blurbs.

With those words bubbling in my brain, I considered what the key points should be for the descriptions. Again, trying to figure out what matters most, what might raise questions in readers’ minds, and what doesn’t give away too much.

Then, it was time to write. The Battle of Ares (Book Five)’s description fell into place rather smoothly, but The Return of Odysseus (Book Six) refused to play nicely. In the first draft, I wrote out random sentences in no particular order, but making every effort to give the sentences a bit of flair.

In the second draft, I cobbled together the strongest sentences. The third draft saw a few more changes as I typed the blurbs into the computer.

By this time, I had Book Five’s blurb mostly done, but Six still needed work (as you can see from all the red ink in the photo below). 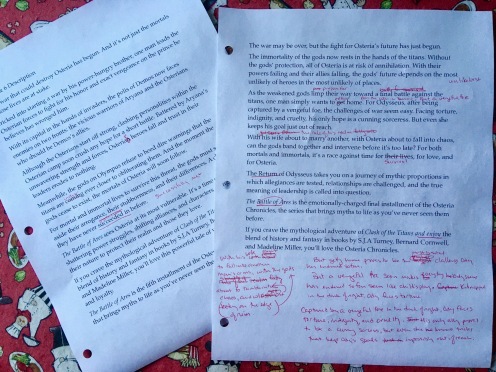 I kept playing with the words and kept punching up the language, and eventually, although they may still get another polish over the next few months, I think I’ve hammered out something not too horrible.

If you’d like to take a look, both blurbs are below.

Are you a writer? Do you love or hate book descriptions? Have you ever hired someone to do them for you? If you’re a reader, how strongly do book descriptions influence your purchase, or do you just buy on cover and title alone?

The Battle of Ares: Book Five of the Osteria Chronicles

The war that could destroy Osteria has begun. And it’s not just the mortals whose lives are at stake.

Tricked into starting a war by his power-hungry brother, one man leads the Osterian forces to fight for his honor and exact vengeance on the prince he believes has wronged him.

With its capital in the hands of invaders, the polis of Demos now faces enemies on two fronts: the vicious warriors of Aryana and the Osterians who should be Demos’s allies.

Although the Osterians start off strong, clashing personalities within the Osterian camp soon crush any hope for a short battle. Battered by Aryana’s unwavering strength and forces, Osterian heroes fall and trust in their leaders erodes to nothing.

Meanwhile, the gods on Olympus refuse to heed dire warnings that the titans are inching ever closer to obliterating them. And the moment the gods cease to exist, the mortals of Osteria will soon follow.

For mortal and immortal lives to survive this threat, the gods must set aside their arrogance, their stubbornness, and their differences. A challenge they have never successfully met before.

If you crave the mythological adventure of Clash of the Titans and enjoy the blend of history and fantasy in books by S.J.A Turney, Bernard Cornwell, and Madeline Miller, you’ll love this powerful tale of vengeance, honor, and loyalty.

The Battle of Ares is the fifth installment of the Osteria Chronicles, the series that brings myths to life as you’ve never seen them before.

The Return of Odysseus: Book Six of the Osteria Chronicles

As the weakened gods limp their way toward a final battle against the titans, one man simply wants to return home from the war in Demos. But getting home may just be the toughest challenge Odysseus has ever endured.

Captured by a vengeful foe who makes the brutality of war seem like child’s play, Odysseus faces torture, indignity, and despair. His only hope proves to be a cunning sorceress, but even she has tricks that keep Odysseus’s goals impossibly out of reach.

With Odysseus’s world about to fall apart, with Osteria teetering on the edge of ruin, and with titans on the verge of supremacy, can the gods band together and intervene before it’s too late?

For both mortals and immortals, it’s a race against time for survival, for love, and for Osteria.

In this emotionally-charged final installment of the Osteria Chronicles, The Return of Odysseus takes you on a journey of mythic proportions in which allegiances are tested, relationships are challenged, and the true meaning of leadership is called into question.

If you crave the mythological adventure of Clash of the Titans and enjoy the blend of history and fantasy in books by S.J.A Turney, Bernard Cornwell, and Madeline Miller, you’ll love the Osteria Chronicles, the series that brings myths to life as you’ve never seen them before.

Affiliate Link…there’s no extra charge for you, but I get few pennies tossed into my pocket. 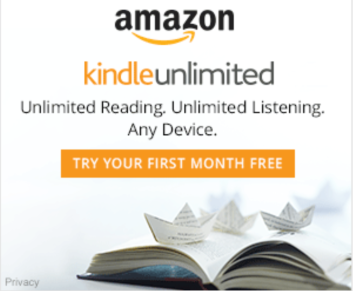