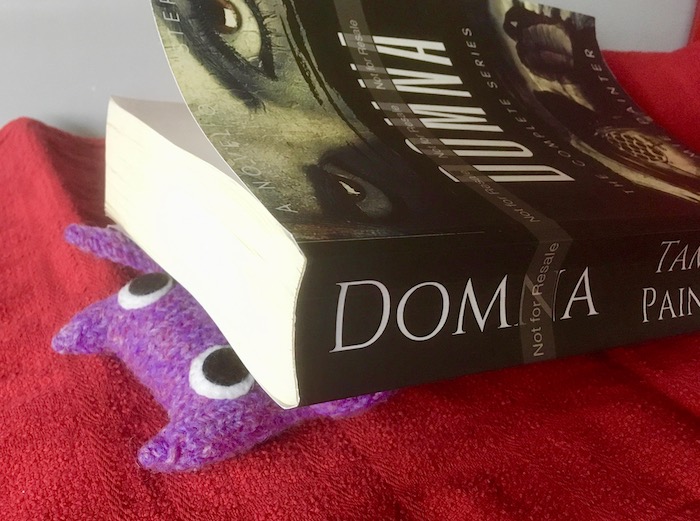 Fall for the Complete Series of Domna

Well, the calendar has gone and done it again. It’s dragged me kicking and screaming into my least favorite season of them all. Fall – or should I say foul? – means mucky leaves, darkening days, and trying to figure out people’s bizarre obsession with pumpkin spice everything.

However, this fall does bring some exciting news in regards to my writing world….

It’s finally time to preorder your copy of The Complete Set of my historical fantasy Domna!

And no, it does not come in a pumpkin spice version!

If you’re unfamiliar with Domna, I released it as a six-part serialized novel earlier this year. I also released The Complete Series in paperback format back in February. And let me just say, at over 600 pages, that book was a monster of a tome!

For those of you who aren’t into weight lifting while reading, the ebook is perfect because those little electrons weigh next to nothing. And it’s available now…sort of.

The Description and Some Reader Blurbs

Before I get to the details of where you can pre-order Domna, how you can get The Complete Series without having to wait, and how you can sample the first sixth of the book without paying a single cent, I suppose I should tell you a bit about Domna and what others think of it.

​Destiny isn’t given by the gods, it’s made by defying them.

If you like the political intrigue, adventure, and love triangles of historical fiction by Philippa Gregory and Bernard Cornwell, and the mythological world-building of fantasy fiction by Madeline Miller and Simon Scarrow, you’ll love Domna.

What Readers are Saying…

Domna: The Complete Series will be released on Kobo on 5 November and on all other major retailers on 3 December. You can pre-order your copy now for $5.99 (US) by using THIS LINK and clicking through to your favorite retailer.

Of course, if you’re like me and simply don’t have that much patience, you can order Domna right now and get it right now if you shop directly through me at my Payhip Bookstore. Oh, and you’ll also get a tiny discount on the retail price!!

However, if you do want to burn some calories by hefting around the paperback of Domna, you can find it by using THIS LINK and clicking on the Kindle icon, then opting for the paperback version.

If you haven’t been following this blog over the past year, you may have no idea what in the world a Domna is and you may be saying, “I’m not forking over six bucks that I could be wasting on a pumpkin spice latte for your book.”

Your odd taste in beverages aside, I don’t blame you, which is why you can always try out the first installment of the Domna serial for free. Domna, Part One: The Sun God’s Daughter introduces you to Sofia Domna, a determined young woman whose plans for her life get cruelly thrown off course when her father betroths her to a man she’s met only once…and let’s say in that first meeting the man didn’t endear himself to Sofia.

Anyway, if you’d like to give Domna, Part One: The Sun God’s Daughter a try, you can find it for free at most major retailers (click HERE for the links) or at my Payhip Bookstore.

Alright everyone, I’ve done my best to lure you into this intriguing series. Now it’s time for me to head off and work on writing another!

Again, here’s all the links you need to enter Sofia Domna’s politically and emotionally charged world…

Have a great rest of your week!!!

4 thoughts on “Fall for the Complete Series of Domna”