Hankering for Haggis at the Portland Highland Games

After all the book sales, reading competitions, and hunting for book bargains lately, Finn McSpool decided it was time to take a break from all that smarty pants literary stuff and head out for a round of bagpiping-haggis-muching-caber-tossing fun.

Luckily, the Portland Highland Games fit the bill to a T and they just happened to be taking place, so Finn hopped into the backpack and we zipped off to join in this yearly celebration of all things Scottish (with a bit of generic Celtic culture thrown in for good measure).

Long time readers will remember Finn’s previous visit to the Highland Games and I’ll include that post below for those of you who missed out on Finn’s successful attempt at caber tossing.

Since I’ve already covered most of the sights of the games, I thought I’d try something a little different this time…the sounds of the Highland Games! Don’t worry, despite the vast quantities of beer and food consumed by attendees, there’s no belching or farting. Maybe next time.

But before we jump into the soundtrack, let’s take a quick peek at a few photos from this year’s Games.

Of course, it wouldn’t be a Scottish festival without haggis. Who knew stomach, oatmeal, and offal fit so well into a can? And who knew there were so many varieties?

And yes, the vegetarian haggis is still for sale (probably the same cans from when we went two years ago!). 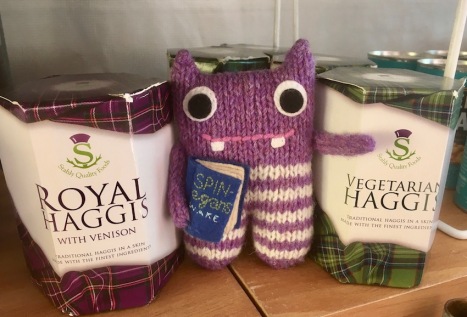 Since we forgot the can opener (oh darn), Finn had to settle for what was on offer at the food stands. And hey, what better way to get in touch with your Celtic roots than to tackle a turkey leg that’s five times bigger than you?

Still, that massive hunk of bird appendage does seem more Henry VIII than Robert the Bruce, doesn’t it?

Once Finn polished off the turkey (while singing a few rounds of “I’m Henry the Eighth I am, Henry the Eighth I am I am…), it was time to explore the gathering of the clans. Don’t worry, this has nothing to do with racist assholes in white hoods. Instead, it’s a series of displays from the many Scottish families (clans) in the Portland area.

Finn, despite the turkey overdose weighing him down, got super excited to see his creator (Helen of Crawcrafts Beasties) was being proudly represented at the games. Unfortunately, Finn was a bit dismayed that there were no other Beasties at the Crawford display. (Helen, if you’re reading this, hint hint.) 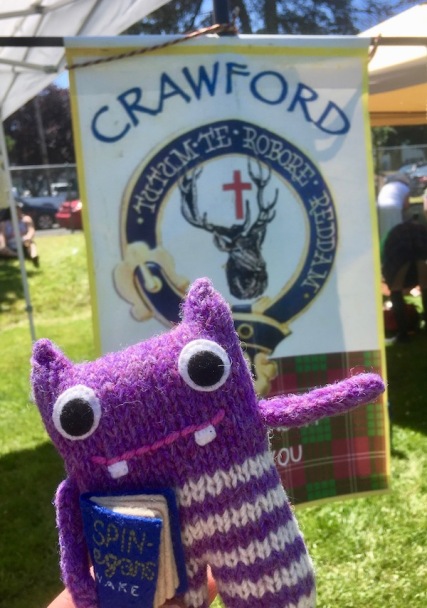 That’s about it for this year’s photos. Again, I’ll include the post from my visit two years ago that includes plenty of funny Finn photos, his Highland hi-jinx, and men in kilts (swoon) below.

And now, as promised, here’s some sounds from the Games (I promise it’s not all bagpipes).

First up, the fiddle competition. The first is a single contestant (who I believe was named Emily Rodriguez). The second is from a group of fiddlers. Both of these are a bit quiet, so you’ll need to turn up the volume to hear them well.

Next, each year the Games feature a number of music groups which are all great. Here’s a sample from The Fire (if you like this, you can check them out HERE).

What about you? Any Celtic celebrations where you live? Ever tackle a turkey leg larger than your head? And be honest, haggis and bagpipes…love ’em or leave ’em?

Have a great weekend everyone!!

Finn Conquers the Caber at the Portland Highland Games

Although Finn usually runs around naked, he thought he should dress up in case he met any relatives at the games. Luckily, I had some plaid material hanging around that would make the perfect Beastie kilt. But first, time for the worst part of any fashion sewing: taking your measurements.

With measurements in hand, I set about to cutting and stitching. I had to shoo Finn away from a homemade chocolate cake (although not quickly enough, it seems) since I’d be quite angry with the little monster if I went through all this only to find out he had gotten too fat for the kilt. 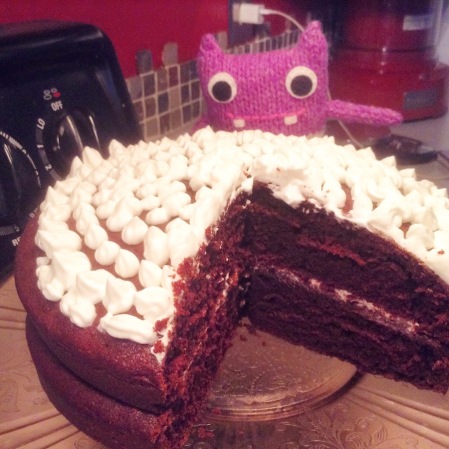 Because the kilt was too tiny for the sewing machine, everything was hand-stitched. Also, the material doesn’t take ironing, so I had to make “faux” pleats with little panels of fabric. The whole process gave me a HUGE (even huger than normal) appreciation for all the detail work that Finn’s creator at Crawcrafts Beasties puts into her monsters.

With Finn’s kilt narrowly finished in time, it was game day! This was the 65th year of the Highland Games and the second time Mr. Husband and I had gone. The day is full of bagpipes, men in kilts, dancing, more men in kilts, clan heritage info, and men in kilts tossing heavy things. 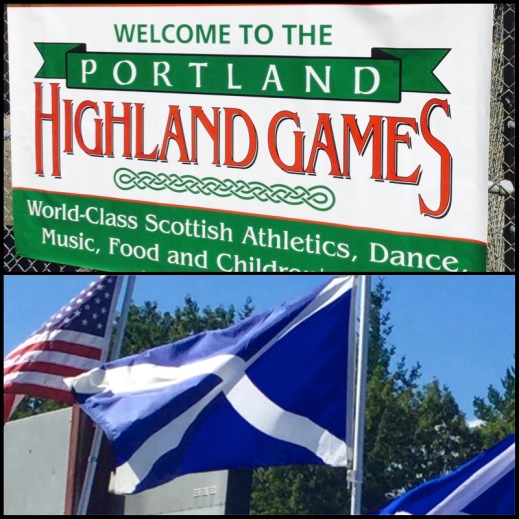 The first stop of the day was to watch the sheepdogs show off their stuff. The sheep, perhaps sensing a certain wooly audience member, were trying to act tough and weren’t very cooperative. Still, the dogs didn’t give up and eventually got the sheep corralled. 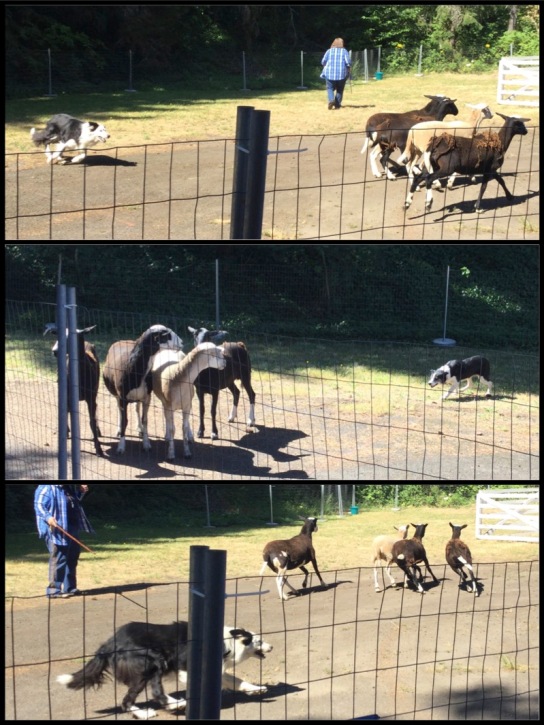 Finn got super excited when the final sheepdog came out…a blonde border collie who also happened to be named Finn! 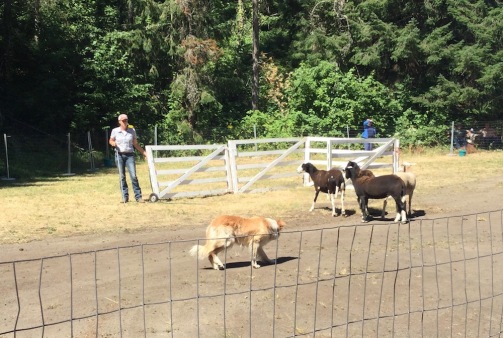 Of course no event would be complete without places to do some shopping. However it’s important to keep in mind that you absolutely must distract Beasties when they pass certain booths…. 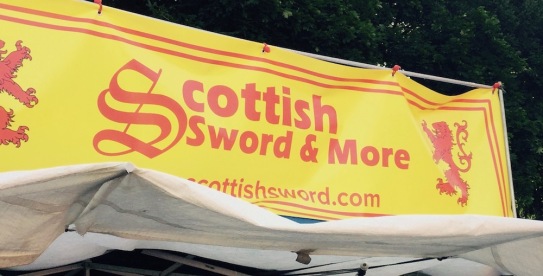 Once I had hurried him past that bit of potential danger, we stopped into a booth full of Celtic-related treasures. Finn got a thrill when he found some items celebrating his homeland.

After dragging him away from the tea set, we all had a moment of confusion. I’ve heard of haggis, I’ve even eaten haggis, but what in the world is vegetarian haggis?!! Haggis is a dense mash up of animal parts. How can it be made vegetarian? It was time to leave the shop after that.

Despite the haggis conundrum, hunger was settling in, but Finn wanted to look at one more rack. Yes, Finn, it’s a good color on you…

Unfortunately, the food choices were a bit limited (not even any haggis, vegetarian or otherwise), but this is Portland and there’s always going to be good beer at an event. Finn seemed very eager to share my lunch selection.

It wouldn’t be a Scottish celebration without folks in kilts playing bagpipes, so we settled in to watch a few bands in the Pipe Band Competition. Trouble was, they compete by having each band playing the same song. After hearing “Scotland the Brave” four times, we were ready to move on. (And ready for another beer.)

Wait, who’s that? It’s okay Finn, she looks like she’s in a good mood. Go get your picture with her. Yes, Finn, I’m sure she wore that purple dress specifically to match you.

Finn’s brush with fame over, it was time to make our way up to the Heavy Athletics field. In that section of the event you can also find the clan booths and learn all about your Scottish roots. With second beer in paw, Finn (literally) stumbled upon his true clan.

One of the first heavy events we watched was the Portland Stone Toss. Although Highland Games normally involve throwing big, heavy things, the Portland Stone Toss is unique to Portland’s games (as you might have guessed). This thing weighs 96 pounds! It was found at the Sandy River 30 years ago and has a natural dip in its side. The tossers (haha) hoist the stone up, nestle their head in the dip to get balanced, take a few steps, and then chuck the stone as far as they can. The record throw from last year’s competition was a little over 19 feet! I bet hernia doctors just LOVE the Highland Games.

The granddaddy of all events is the caber toss. After someone goes and steals a telephone pole, the competitors have to pick the thing straight up, jog a bit, then toss the caber. The caber then needs to turn end over end and land in as close to a twelve o’clock position as possible. About half the caberers (that’s word, right?) don’t even get the pole to turn over.

Finn, having had three beers now, was feeling he could conquer the caber. His isn’t regulation, but since he was the only one competing in the Monster Division, it was okay. His first toss didn’t go so well. In fact, the caber upended him instead of the other way around. Finn, are you okay?

But Finn wasn’t about to let a little cranial bruising get in his way. He grabbed his caber, and gave it all he could.

Of course, after all that excitement (and all that beer), Finn was tuckered out. Once he got home, he flopped into bed and showed that he is a true Celt who wears nothing under his kilt.

9 thoughts on “Hankering for Haggis at the Portland Highland Games”