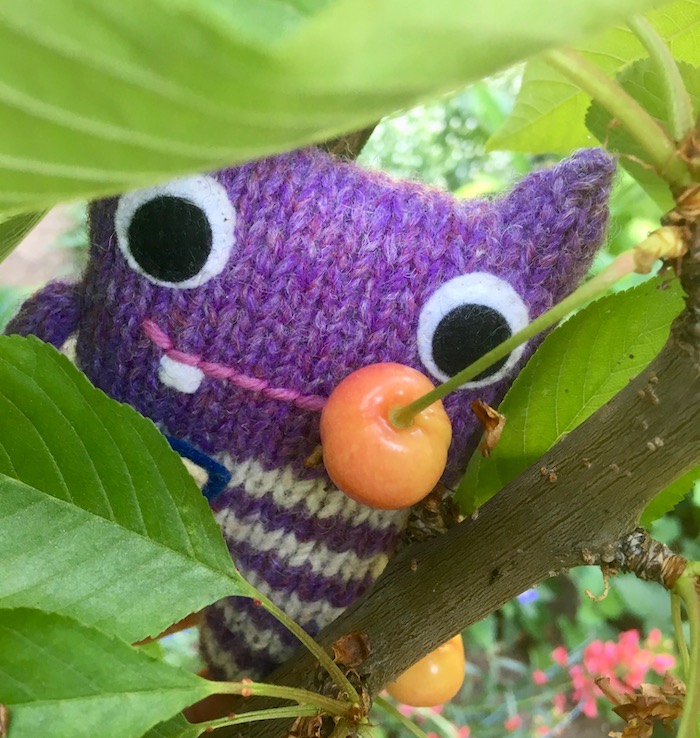 A Monstrous Pest Problem in My Fruity Garden

After a few false starts, spring is truly getting underway now in Portland — actually, it seems we’ve skipped over spring altogether and launched right into summer! Regardless, winter’s well over and that means my garden turning into a jungle. Unfortunately, I’m also dealing with a certain stripey pest problem… 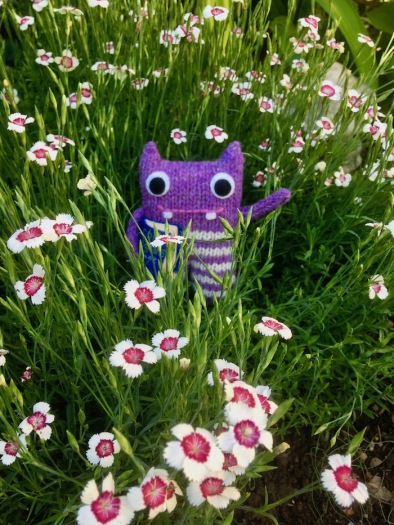 Classified in scientific terms as Beastius finnicus, you know him more commonly as Finn McSpool.

-Hey Finn, do you want to help me see how the garden’s doing?

-Does it involve work?

-Maybe a little, but it also involves food–

After I extracted the knife and fork from his paws and wondered where in the world he found a set of salt and pepper shakers, we roamed around the garden to marvel at the fruit coming on. 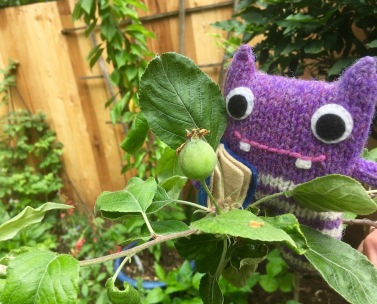 …but a little less so at the (so far) slow production of my raspberry plant.

-Hmmph, is that the best you can do?

-It’s still early in the season, Finn, and they did have a rough time when Mr. Husband put in the new fence in March.

-Well, maybe this will meet your approval… 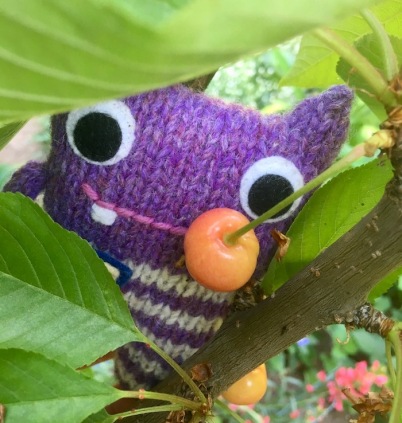 -Okay, but look at all these strawberries coming on. 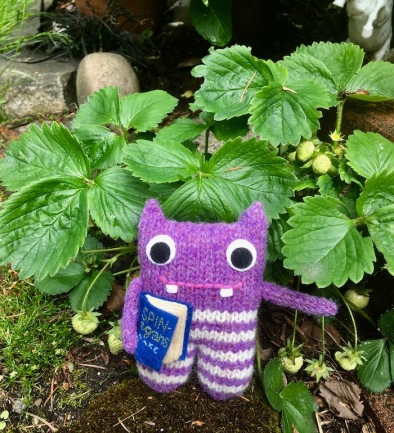 -Nice!! Um, say (he says, glancing around with belly rumbling), you got anything ripe in this garden?

-Will these honeyberries do?

Anyway, I had been intending to put those berries in my breakfast yogurt, but immediately after this photo was taken, they all disappeared. I don’t want to make accusations, but I did catch a certain monster wiping berry juice off his face.

After letting Finn dangle until he apologized for stealing my breakfast, I helped him down. Then we heard buzzing coming from one of the flowers on this foxglove.

Sure enough, we had a friend hanging out with us…a big ol’ bumblebee who seems to love this plant. 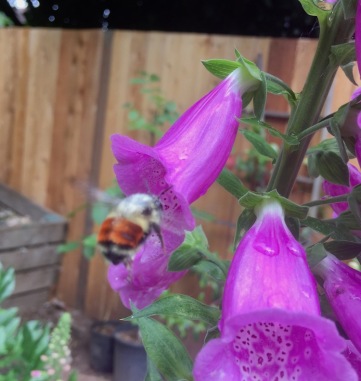 I stood and watched her going about her business for a bit, then realized I’d made the mistake of not paying attention to Finn. No problem, he found a way to draw attention to himself with my mini-lupines….

-You just wait, it’ll be all the rage in Paris this fall, but what’s really going to wow them is this fashion accessory.

-What in the world is a burse?

-You know, like a man purse is a “murse”, this is a Beastie purse, and therefore–

-A burse. I get it. If you’re done with that, do you want to help me tend to the beans and tomatoes?

-Nah, fruit and veg are way too much work. I’m just going to kick back and eat cookies instead.

Ah, the life (and metabolism) of a Beastie.

Hope you enjoyed this garden stroll and fun with Finn. What’s growing in your garden? I’ll be back next week with a glimpse into the future of my writing world…and possibly this blog.

9 thoughts on “A Monstrous Pest Problem in My Fruity Garden”