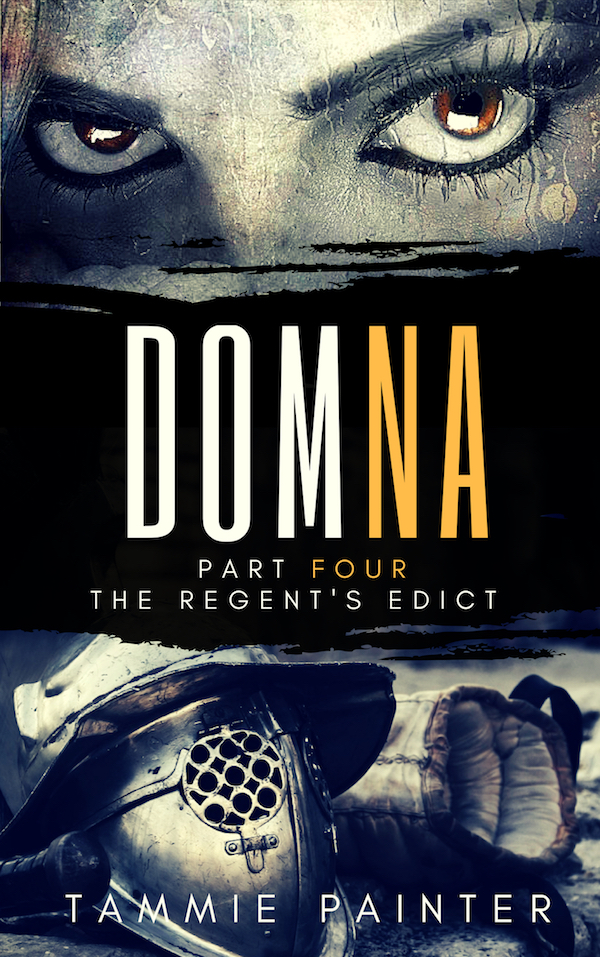 First off, as ever, a HUGE thank you to everyone who pre-ordered this latest installment of the Domna serial! The numbers weren’t earth-shattering, but there was a teensy tiny increase from the pre-order numbers for Part Three. So, thank you, thank you thank you.

And, of course, a GIANT heap of gratitude to those of you on my review team who continue to post your humbling reviews for Parts One through Four, as well as the Complete Series on Amazon, Goodreads, and BookBub. You guys are the BEST!!!

Today the fourth part of my serialized historical fantasy novel spread its malice across Amazon.

And let’s just say that this part is not a happy one. There’s plenty of strife for Sofia and her son Lucius.

Not only is Sofia’s husband, Sirius, having to fight to keep the solonship, but Plautinius (Sirius’s cousin and advisor) is tightening his grip on Sirius and putting Sofia’s fidelity into question. Plautinius has pulled this trick before, but this time he has evidence.

Just when Sofia thinks things are safe, just when she thinks she and Plautinius can find a common ground, this devious man proves he’s willing to strike at the people Sofia cares about most to bring her down.

Grab your copy of Domna, Part Four: The Regent’s Edict for only 99c to continue this tale of passion, betrayal, and intrigue today!

And if you haven’t started the series yet, sign up to my newsletter to instantly get your FREE copy of Domna, Part One: The Sun God’s Daughter.

Tomorrow I’ll be back with a rare Thursday post to provide a little news regarding this release and future Domna releases. See you then!!

Although he’s won the solonship, Sirius soon discovers others are poised to viciously claim the title as their own.

Catapulted into a world of danger and temptation, Sofia discovers her only chance of survival is to stay one step ahead of her enemies.

But in Osteria, new perils lurk around every corner and plots don’t always strike down their intended victims as Sofia discovers her ambition may cost her far more than she expected to pay.

Grab your copy of Domna, Part Four: The Regent’s Edict to continue this passionate tale of treachery, bravery, and desire today.

4 thoughts on “It’s a Dark and Dastardly Release Day for Domna, Part Four”