A Monstrous Christmas at Pittock Mansion (aka ‘The Solonian Palace’)

That’s right, Finn McSpool is back and he’s not only ready to show off some local holiday cheer, but also the building that inspired my favorite location from my fantasy world of Osteria: Portland’s Pittock Mansion (aka “the Solonian Palace”).

I went hunting through my old blog posts, certain that I had covered Pittock Mansion before, but other than one little bitty mention in this post, this lovely little historic building has failed to be featured, so I’m thrilled that Finn and I get to finally show it off.

A Bit of Mansion History

I’ll try not to bore you with too much history, but I will cover a few points. Pittock Mansion is named for Henry Pittock who, at 19 years old, blazed the Oregon Trail in 1853. Starting out as a mere typesetter, Henry eventually became owner and publisher of The Oregonian newspaper. But our young Henry had his hands in many ventures including mining, steamboats, ranching, real estate, and pretty much any other 19th century way to make money and have fun doing it.

What’s a fellow (and his wife Georgiana) to do with such wealth? Besides supporting many local causes and indulging in a love of outdoor pursuits, they decided to build a mansion on top of a steep hill. They moved in in 1912, but despite its grandeur and fabulous views, the house was only occupied until 1958 when it was put up for sale.

Apparently the real estate market wasn’t as hopping as it is now in Portland because the mansion sat empty with its forlorn For Sale sign for over four years. Then, in 1962, a massive storm came barreling through (a storm we STILL hear about on the local news) and caused severe damage to the building and its interior.

Another couple years went by and developers started eyeing the enviable bit of property. Plans were undertaken to tear the mansion down, but Portlanders rallied around their little mansion and raised $225,000 to buy the house and property. (By the way, $225,000 won’t even buy you a bungalow in Portland these days.)

The house was shown a bit of TLC and opened in 1965 to the public as a historic house and museum.

My Addition to Mansion History

I’m sure this will soon be added to the history page of the mansion’s website…in 2010, Pittock Mansion got renovated and reimagined to become the Solonian Palace in my Osteria Chronicles series. The mansion/palace returns in my upcoming serialized novel Domna, and I just happened to come across this passage about the building when I was doing some proofreading yesterday:

Even with a portion of it hidden by scaffolding, it would have been impossible not to fall in love with the Solonian Palace. The building was beautiful from its red-tiled roof to its sweeping twin staircases leading off a spacious entryway, from its tiny sunrooms where one could lounge in a daybed and watch the world go by to its large central room that led to a portico which opened onto a sprawling lawn. Beyond this lawn spread Portaceae City.

Like my characters, I LOVE this place and will try to go there about once a year (even if it’s only to wander around the grounds) imagining it as my own home. Unfortunately, I haven’t yet been able to convince the city to let me move in.

Despite all these visits, I’ve never visited the mansion when it’s all gussied up for Christmas.

This year, Mr. Husband snagged some free tickets (my favorite price!). The moment he heard us getting ready to leave, Finn jumped in my pocket and demanded to go along.

A monster loose in the mansion? And you thought that storm did some damage!

Of course, it didn’t take long for Finn to jump right into the action…and the displays. 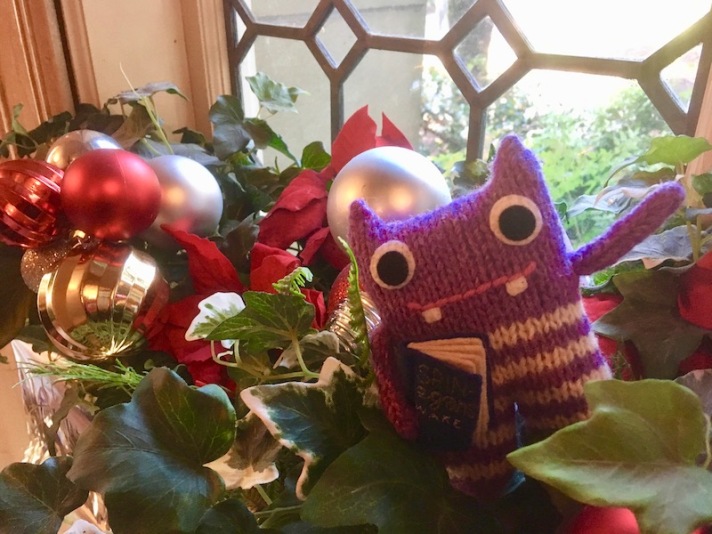 Just as I was sneaking a photo of this mayhem, there was some throat clearing behind me. Uh-oh, it’s the authorities!

Luckily, this St. Nick did indeed turn out to be a jolly old elf and asked about Finn (probably to make sure he put the lump of coal in the right stocking on Christmas Eve). Once we were cleared to go, we made our way through the rooms, each of which is decorated by a different local business or group. For example, the breakfast room received attention from a tea shop, and let’s just say I kept a tight hold on Finn around their precarious set up…. 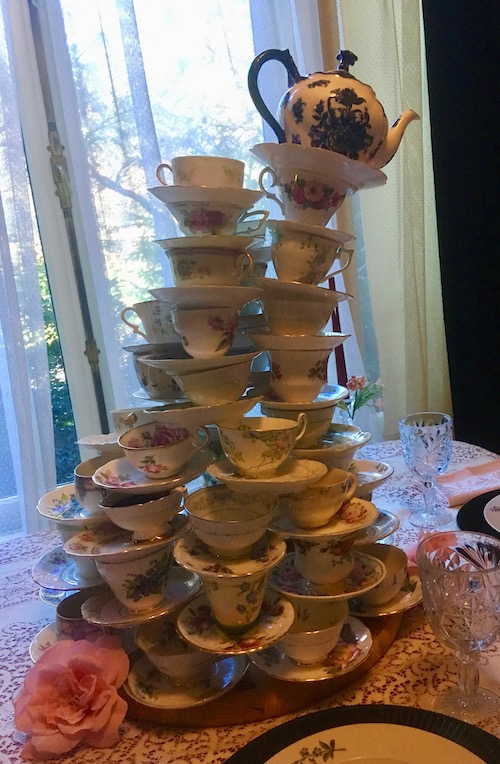 Phew, once past that, it was down to the servants area where Finn thought he’d try to order some lunch on the old-timey phone/intercom.

Unable to get any dial tone, we headed to the kitchen where we found this incredible stove with its pot of fluff about to boil over…

Wait, where’d Finn go? Finn, get out of there!! 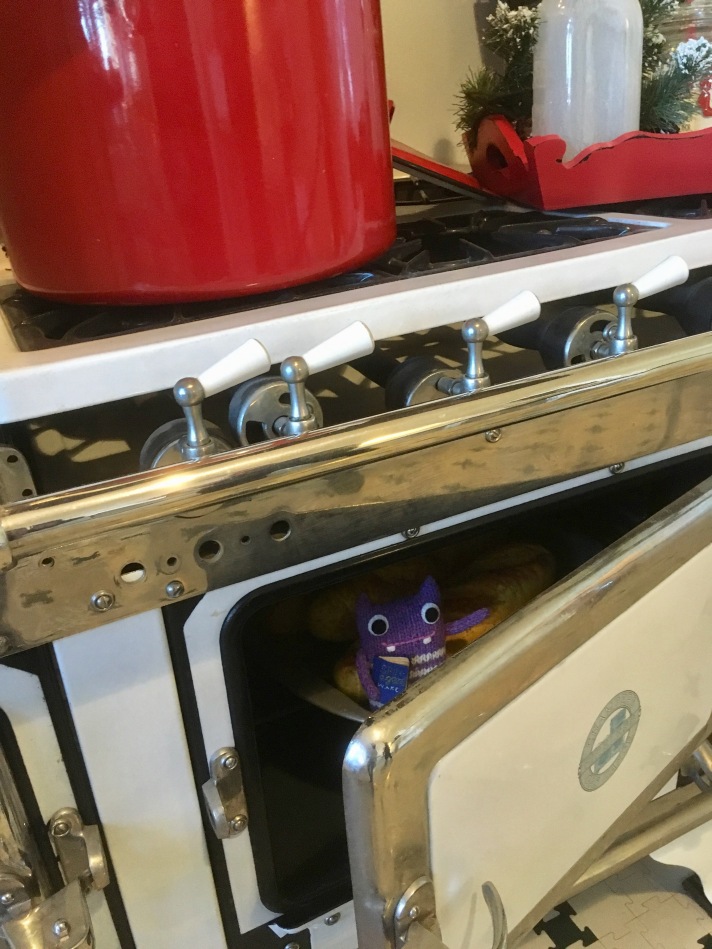 After getting his toes toasted in the oven, Finn made a couple friends… 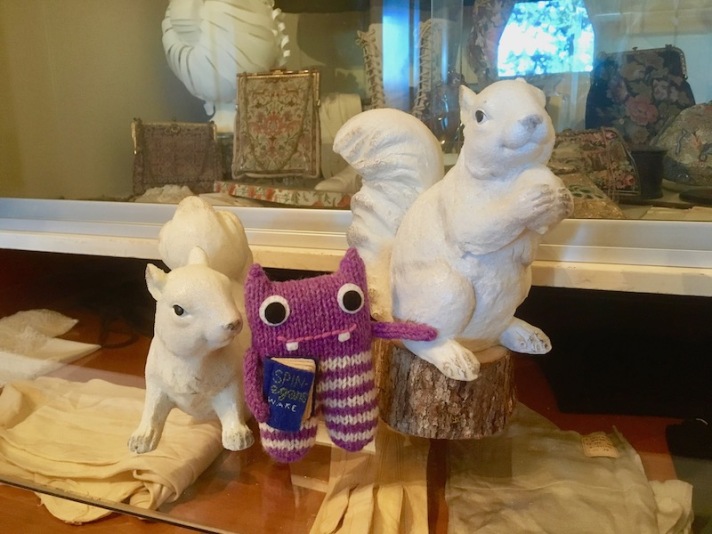 And he kindly inquired if this Gaul was alright. No, Finn, he’s dying, leave him in peace…

Finn then tried to steal some treats from these stockings. Little did he know the one he picked was being guarded by a ferocious bear…

I forgot to count, but there were perfectly decorated trees everywhere you turned. 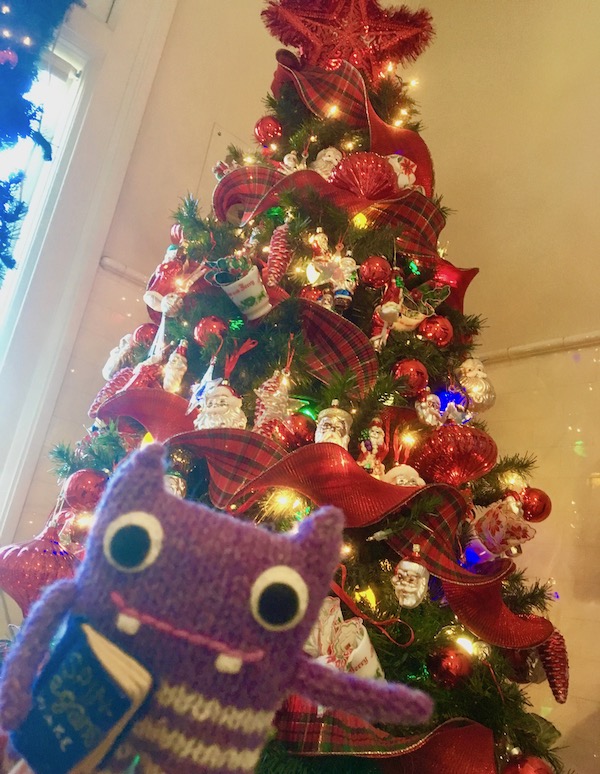 No, I’m not kidding. Everywhere! Even the bathroom. Because what could be more festive than a giant tree next to the TP?

Finn then began snooping in the medicine cabinet (yeah, he’s one of those kind of monsters) and found something that could come in handy if you have any dirty fairies lurking around the garden… 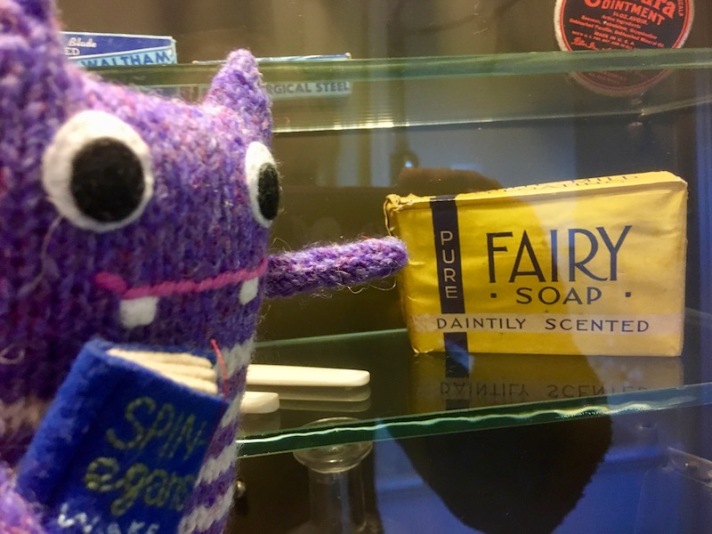 Making our way to other parts of the house, we passed this lovely display (why do my stockings never hang so perfectly?)…

And Finn found some presents under the tree he was interested in. No, Finn, I don’t think that’s how that works… 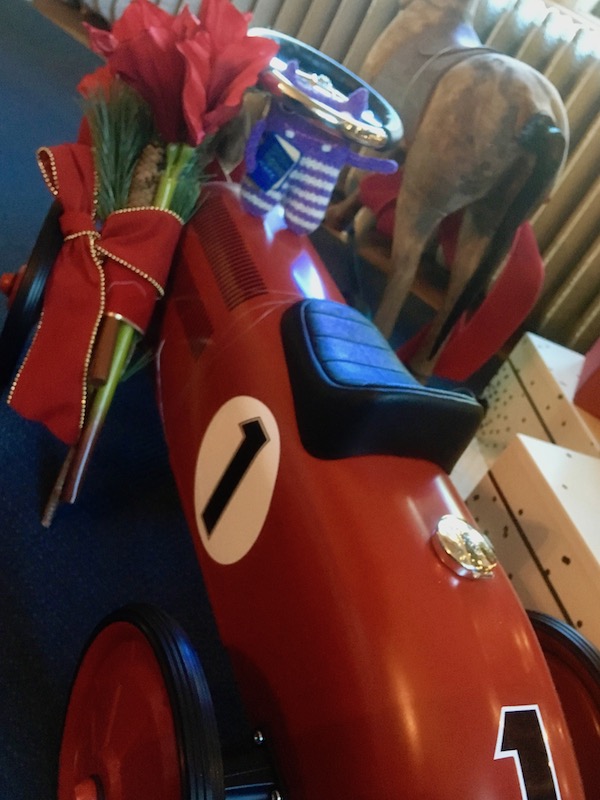 Realizing he couldn’t possibly reach the steering wheel from that race car seat, he tried out a less modern form of transport…

Again, Finn, that’s not how it’s done. Not at all. Now get off there before PETA comes after us. 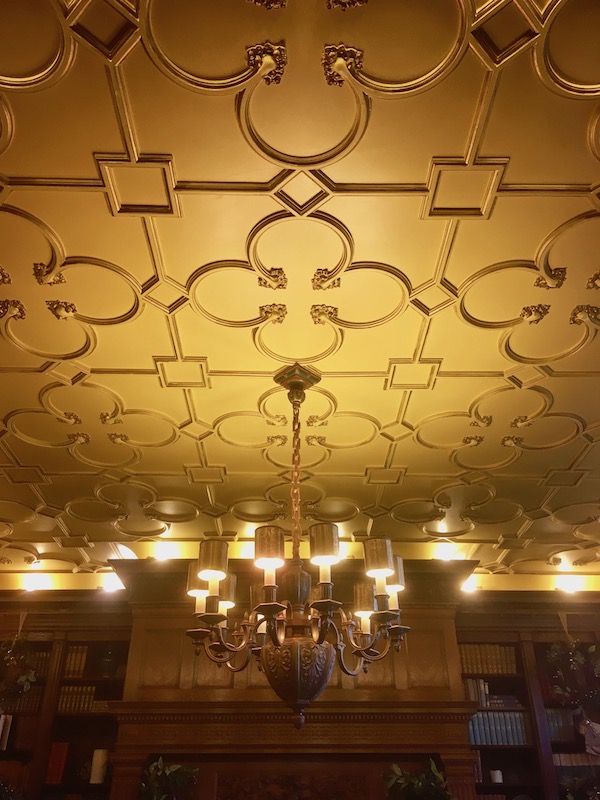 And to snap another Finn photo (of course)…

…we decided to head outside to take in the views. That’s Mount Hood in the distance. 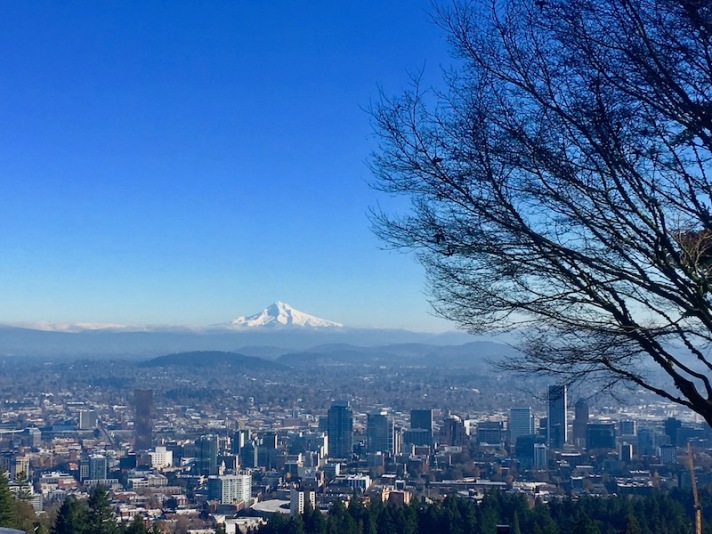 When I looked down, Finn was gone. I was worried he might have dashed back in to give Santa his very, very long Xmas wish list, but turns out he was just taking a break after all that exploring.

Knowing what a monster he can truly be when he’s hungry, we hurried down the hill to get Finn some pizza at Escape from New York.

–Thanks! So…what are you guys going to have? 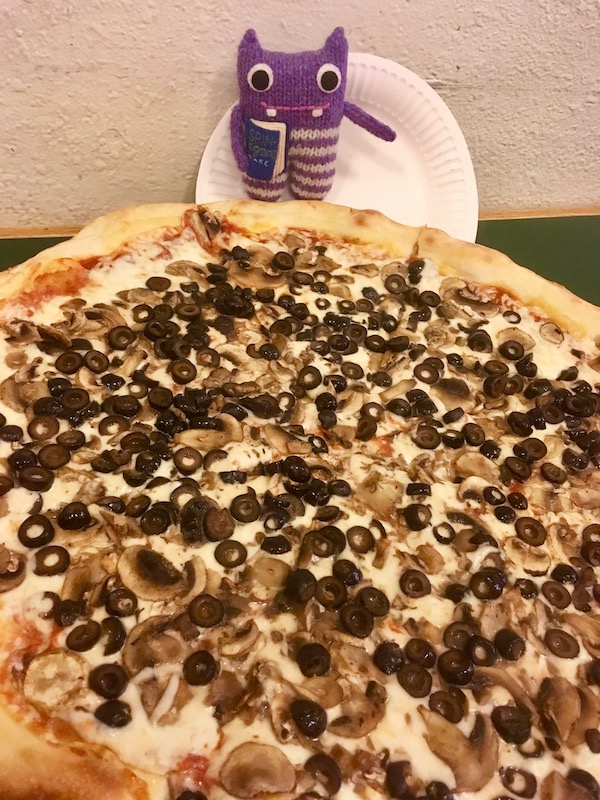 I hope you enjoyed this little tour of Pittock Mansion and getting to see Finn again! What about you, are there any places near you that are your “dream home?” Any historic sites that put up fabulous holiday displays?

I have a feeling Finn might be back next Saturday with some great news for book lovers and I’ll be back next Wednesday with the next chapter from Domna, Part One: The Sun God’s Daughter. See you then!!

You can now snag your copy of Domna for the special pre-order price of 99c (US$, UK£, EU€) from most major retailers. 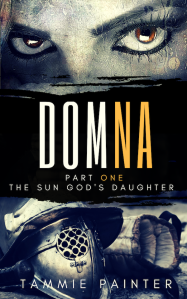 And not just Part One, but all six parts of this highly-anticipated serialized historical fantasy novel. That 99c price will go up soon after each part’s release, so you might want to get your copy today!

Simply follow these Universal Book Links to treat yourself to a little something special at a fabulous bargain.

*These titles are not yet available for pre-order on Amazon, but can be found at many other retailers