Time for Another Reveal

Yes, after many surveys, design changes, more surveys, cursing at the computer, and more surveys, the book cover for Domna is finally ready.

Now, I’m going to have to admit to a tad bit of election fraud here (hey, it’s America, it’s what we do). In the blog and newsletter surveys I’ve posted to assist me in this agonizing decision, the winner was (just barely) Big Eyes. You’ll probably remember her…

However, as part of the course I told you I’m taking I had to do something I really really REALLY didn’t want to do: I signed up for Facebook. Ick, ugh, blech, I know! But the course includes membership in a private Facebook Group that I really wanted access to, so I bit the bullet and made an account.**

Besides being willing to answer my stupid questions, the group also does cover critiques. So, I decided to be brave and throw up my two top contenders.

The comments started rolling in immediately.

Now, when dozens of people who spend their days agonizing over things like book covers repeatedly say things like, “I would buy that book in a heartbeat!” “THAT is an awesome cover!” you kind of take notice.

They were NOT saying these things about Big Eyes. While I like how eye-catching that image is, there was something about it that I couldn’t quite put my finger on. The Facebook Group nailed it, though. They said she looked scared, that she looked like she was waiting for the big hunky guy to save her (not what I want to portray), and that she looked like she would shrink and hide rather than stand up and fight.

Yes! That’s what was nagging at me. I mean the female lead in my book is going out and leading armies, but she’s definitely not shrinking into a corner and that’s what Big Eyes was portraying.

Okay, okay, but first….as ever, I am beyond grateful (and overwhelmed) by how many of you took time to give me your thoughts on the first round of designs. All your comments gave me a good launching pad for the rest of the design process, so THANKS!!

Second, below you’ll see just one cover and may be scratching your heads saying, “Wait, I thought this was a six-part serial.” It is, and I did play around with making a few alterations to the images in an attempt to make six different covers with each one reflecting the theme of that part of the story, but ended up preferring the overall balance of the single design (and some recent marketing advice said to keep the covers of a serialized novel the same to tie all the books together).

Obviously, the subtitles will change and those will be….

Alright enough blather, this is worse than an awards show speech. Let’s get to that cover, shall we? Cue drum roll….. 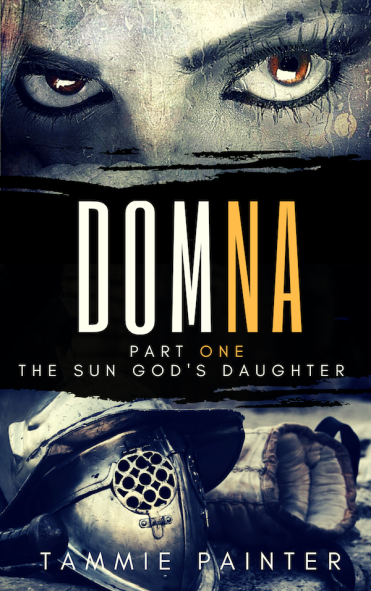 Of course, a couple days after I settled on this design, I found a font that might (MIGHT) work better for the title, but it won’t be a huge change if I do decide to use it.

So, what do you think? Is this a book you’d be curious to learn more about, or would you pass it by? Give me your honest thoughts in a comment below!

I’m still sorting out the exact timing, but within a week or two, I’ll begin sharing Part One of Domna chapter by chapter with you on this blog, but there may be one more announcement before we jump into the story. Oh, and Saturday, all the Beasties will be back with a special little getaway, so you won’t want to miss that. See you then!!

**PS – Really, in the comparison of Evil, the evil of Facebook makes Ed Sheeran look like a complete Evil amateur. THAT’S how little I want to be on Facebook, but if you want to go over an throw a “Like” on my (very underused) Page, I’d appreciate it.

Click the button below to get your FREE copy of The Trials of Hercules: Book One of the Osteria Chronicles!

11 thoughts on “Time for Another Reveal”