After the hustle and bustle of Cork and narrowly escaping the swirling pit of evil in Galway, Mr Husband, Finn McSpool, and I woke up to the fresh air and bird song of Inishmore. Even better? Breakfast was ready! 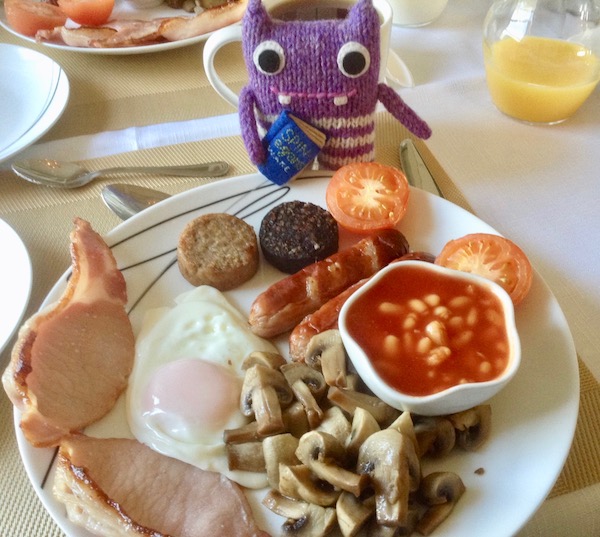 After slogging through a vast amount of protein, a gallon of tea, and a mountain of mushrooms, we waddled down the hill into the heart of the big town (okay, village) of Kilronan to rent bikes for the two full days we’d be on the island.

Now, before we get too deep into the next bit, let me just state that I used to cycle A LOT on my 20-mile round trip commute to work, but with Portland drivers growing more aggressive, no commute forcing me to ride, and simply being too lazy to pump up the tires, I’ve slacked off on my cycling skills.

Still, they do say once you learn to ride a bike you never forget. Um, clearly “they” haven’t met me.

About five minutes into our first outing, I was on the ground with the bike (aka “Killer”) physically attacking me (or so it felt).

In my defense, I’m used to “real” bikes that require swinging your leg over to mount. Killer was a step-through (“girly”) frame with a rack on the back. With my natural inclination to swing my leg over, I misjudged the distance of the swing and got tangled in the metal puzzle of that damn rack.

There was pain, both physical and mental, but we had sights to see and the first was Dún Aengus (or Dún Aonghasa if you to get all Celtic about it), a Bronze Age fort that’s touted as Inishmore’s Must-See attraction. So, recalling Harry Potter’s introduction to Buckbeak, I cautiously approached Killer and, after he gave me permission, climbed into the saddle.

Soon, I was nervously pedaling along 9 km of coastal road and enduring scenery like this to get to the Dún Aengus visitor center. 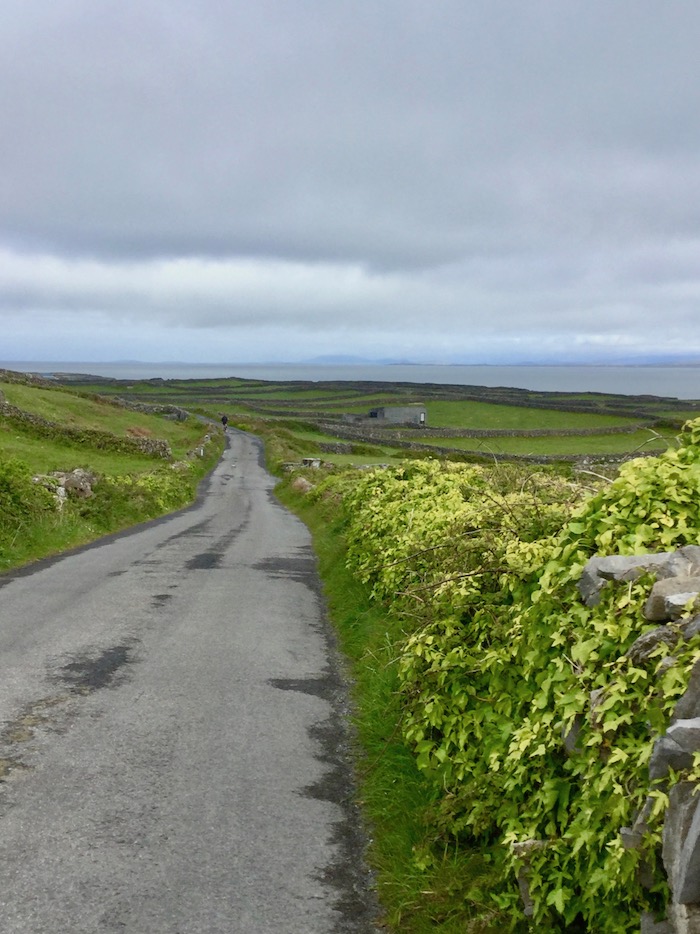 So, yeah, the scenery was amazing, but turning my attention to the other side of the road there were….CRITTERS!!!

Seriously, you’d think I’d never seen livestock before because I kept stopping to take pictures of every cow, horse, and donkey we came across….to the point that I was forbidden from taking any more animal pictures until we were finished with Dún Aengus (since we wanted to get there before the day trippers arrived on the morning ferry).

After wistfully passing by fields full of photogenic fauna, we made it to the visitors center, locked up the bikes, and began the 1-km hike up to the fort.

Now, time for the history/architecture lesson. Dún Aengus sits on a 100-meter cliff and was built sometime between 1500 and 1100 BCE. The fort is made entirely of dry stone (no mortar) and has four concentric circular walls that take up about 14 acres.

Oh, and the name? “Dún” means fort, and “Aengus” means, well, Aengus. Who’s Aengus and why did he get such an amazing spot? Aengus himself was a member of the Tuatha De Danann, the magical folks who were said to inhabit Ireland before the Celts arrived. He seems to be the Irish Eros, being the god of love and poetry. He may also be the god of head injuries because he was often depicted with birds circling his noggin.

Why he got a whole fort named for him no one is certain, but even though Dún Aengus has quite the defensive structure, especially with one wall being comprised of a dense band of jagged, upright stones, it might have just been a place of worship where druids could light bonfires that would be seen all the way to the mainland. Then, again, the spot does command a view of about 120 km of coastline (on those rare clear days), so those bonfires might have also served to warn the mainland of approaching marauders.

As far as ruins go, Dún Aengus is pretty damn impressive, and made even more so when you keep in mind that only half of it remains…the other half has crumbled into the sea as the cliff erodes away. 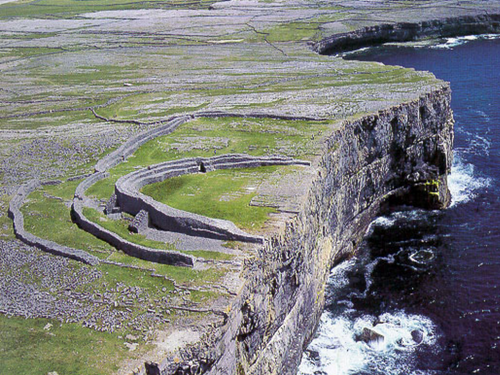 Since there’s no guard rails, you don’t want to go strolling too far without looking up.

Finn was quite awe-struck with the views, but when I started to venture closer to the edge, he suddenly became interested in studying the fort’s wildflowers.

In addition to inspiring poetry and Looney Tunes animations, Aengus also had the ability to repair broken bodies…perhaps he’s taken care of a few who went a little too far trying to get pictures like these….(photo credit to Mr Husband) 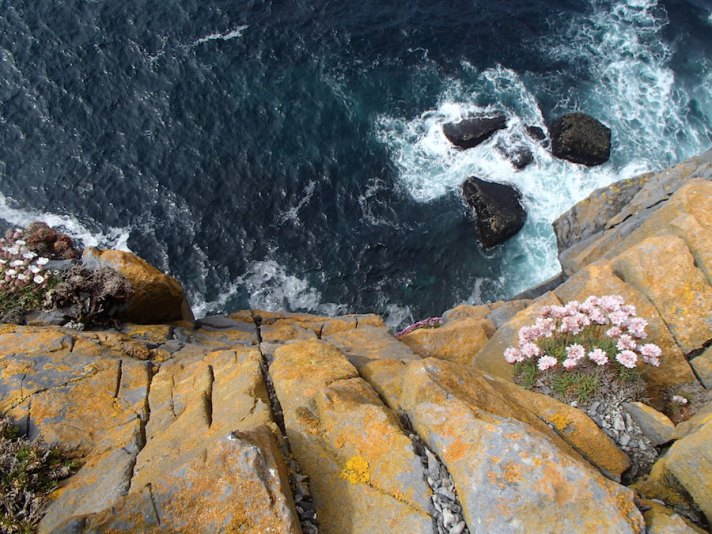 –Hey Finn, there’s some of those flowers you like.

–Thanks, I’m good over here.

Once we’d gotten our fill of the fort (and noticed a tour group approaching) we took one last glance at the view of the outer walls and headed back to our bikes.

Our next stop was only about 2 km away as the crow flies, but since we aren’t crows and since the sight were were seeking isn’t clearly marked on maps or road signs, we did a lot of turning around, venturing over narrow sheep tracks, and asking for directions more than once..and maybe snapping a photo or two of more critters.

After finally locating the entry point to our destination, we ditched the bikes and started hiking.

Where to, you ask? The Wormhole (aka Poll na bPéist). This is simply one of those things you have to see to believe. I’ll get to that in a second because first we have to find it. Supposedly the way there is marked with red arrows painted on rocks. Unfortunately, these rocks are few and far between as you scramble over a limestone landscape that’s very reminiscent of the Burren on the mainland.

Worse still, once you get to a certain point, there’s no more arrows and you’re left to wander aimlessly wondering why you’re going through so much effort to find a hole in the ground when you could be diving into a pint back in Kilronan.

This search eventually became a group effort as more folks joined our head-scratching search. With a little team effort (and plenty more hiking) we found it!

Okay, this site isn’t that impressive if you think it was carved by machine, but it wasn’t. This square hole was formed entirely by natural forces as the sea water (coming in from an underground cave) nibbled away at the rock.

Curious about the Irish name Poll na bPeist? Poll means “hole”, and a Peist is a mythical sea serpent. I guess Mythical Sea Serpent Hole took up too much space on the maps, but I think it sounds much more intriguing.

After marveling at the pool, we started to head back to the bikes….and quickly discovered there are no red arrows to guide you back. Ah well, it wasn’t the first time we got lost that day and we did have that massive breakfast to burn off.

The walk back might have been long, but the view was amazing. And if you can see at that little spot at the top of that cliff in the distance…that’s Dun Aengus.

Wow, okay, that was only that first part of the first full day on Inishmore. I better stop there for this week, but next week Finn and I will be back with the rest of the day’s bike-tastic island adventures. And please please please stop by next Wednesday to take part in a little book cover survey! See you then! 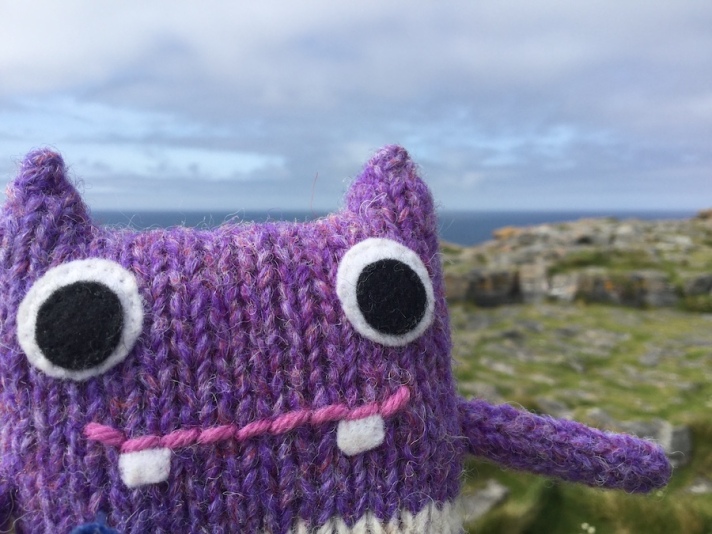 17 thoughts on “Finn McSpool Pedals Into the Bronze Age”