Finn Learns the True Nature of Evil in Ireland

Don’t get me wrong with that post title. The Irish aren’t the evil ones. The majority are, in fact, helpful, welcoming, and able to talk circles around you. However, they aren’t always good at keeping evil Englishmen off their island.

This inability of the Irish Border Control to recognize evil was true in the past and led to a lot of strife for the Emerald Isle. As we’ll soon discover, some of that evil-induced strife continues today.

With our trip to Kinsale having taken up most of a day, Finn McSpool, Mr Husband, and I only had one more day to endure in Cork (and by that I mean, one more day to spend as much time  away from Mr. Weirdo’s AirB&B as possible) before we caught the Citylink bus to Galway for our next adventure and an encounter with evil.

Unfortunately, this malevolent encounter turned out not to be our first for this vacation, nor would it be our last.

Besides a spin around the Crawford Art Gallery, a linger over a coffee at the English Market, and a wander along the river, we wasted a good amount of time in an Aldi we stumbled upon. Since there’s few things more fascinating to me than non-American grocery stores, this was a great way to kill time. And Finn even found a bag of snacks made just for him… 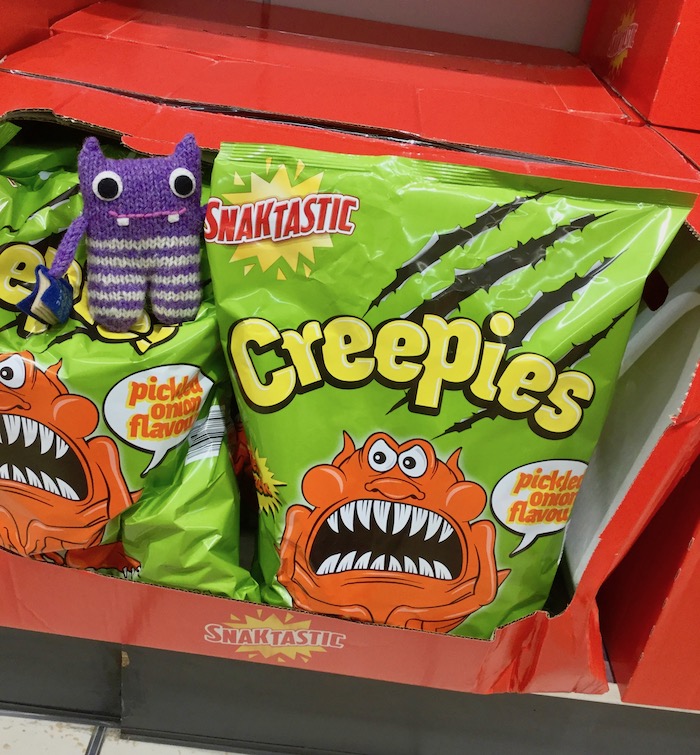 Notice that monster on the bag of “Creepies” is a ginger? That should have been a sign of the evil to come.

Finally, the time arrived for us to make our escape from the super strange vibe of our AirB&B and we breathed a sigh of relief that the ordeal was over as we jumped on the Citylink and trundled away to Galway where we would catch a shuttle to the harbor in Ros a’Mhil and then take a ferry to our next destination.

But first, we had a few hours to kill in Galway, so we checked our bags at a handy hostel and started to explore. The first thing we noticed was that Galway was bizarrely crowded, maybe not Tokyo-subway crowded, but pretty damn close. Still, it was amazing weather and a Sunday afternoon; so we figured everyone was out and about enjoying the day.

As I was getting snap happy with the Guinness signs on a pub, I noticed a banner hanging overhead announcing Ed Fest. We then recalled a notice in the hostel stating the shuttle buses to Ros a’Mhil might be delayed due to people trying to get to the Ed Sheeran concert, but not to worry as the ferries would wait for the shuttle buses.

It then began to dawn on us that the crowds were disproportionally peopled with teenage girls and their annoyed parents. How could that hostel tell us not to worry?!! We were among the minions of the Dark Lord. He that shall be named Sheeran.

We then discovered that this wasn’t the first time Evil Ed had messed with our vacation. See, we had originally planned to spend a night in Galway or two enjoying the Atlantic breezes (read “howling wind”) and vibe (aka “booze”) of the town, but when I tried to book a room months and months back when I was doing my planning, EVERYTHING was full. So, thanks to Evil Ed we had to suffer that extra time in the creepy Cork AirB&B/prison cell.

Wait. Now that I think of it, maybe our AirB&B host was a perfectly normal guy. Ed Sheeran HAD just played in Cork the day before we arrived. So maybe, just maybe, our host was a victim of the Dark Lord’s evil influence. He wasn’t creepy, he just needed an exorcist.

As concert time neared, piles of teenage flesh were crammed into a fleet of waiting buses (I think they employed some of those Tokyo subway crammer-inners).

It was also nearly time to catch our own non-evil shuttle. Let’s just say those first few kilometers took nearly as long as the remaining 30km up to Ros a’Mhil.

Eventually, we made it and the ferry chugged across Galway Bay to our next vacation destination: Inishmore, the largest of the three Aran Islands.

This particular island claims to be the inspiration for Craggy Island of the hilarious Father Ted series and even has a Ted Fest each year (much MUCH less evil than Ed Fest). 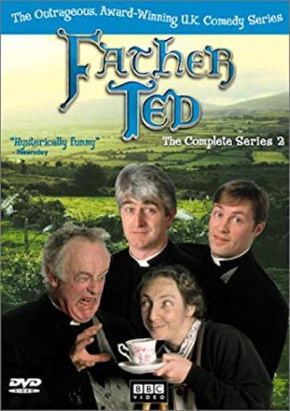 As a fan of the show, I was thrilled to see the welcoming sight of the tourist office….

….but since we’d caught the late ferry over (VERY late due to Evil Ed), the tourist office was closed, so we continued up the hill to our B&B where we received a warm welcome.

After being shown our Finn-coordinated room…. 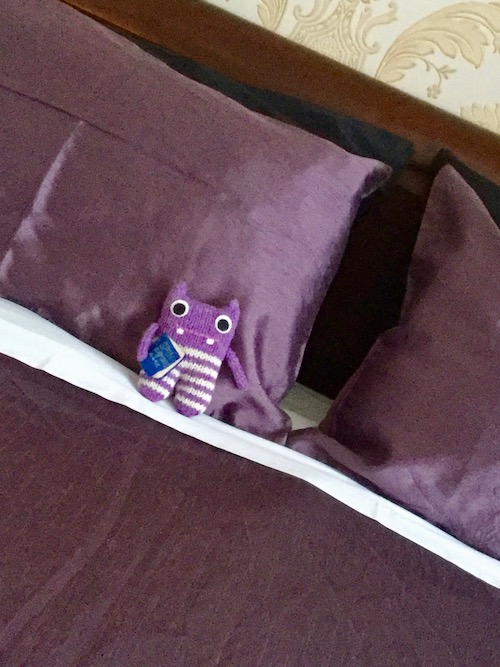 …we all sat down to possibly the most photogenic pot of tea I’ve ever encountered, while the B&B owner, Alison, gave us the lowdown on what we might want to do with our time on the island.

Alison was very much NOT creepy and we no longer felt like we were shacking up in a prison cell. There were even some lovely Finn-colored flowers in bloom just outside our door. We thought, “Surely, we’ve left Evil behind.” 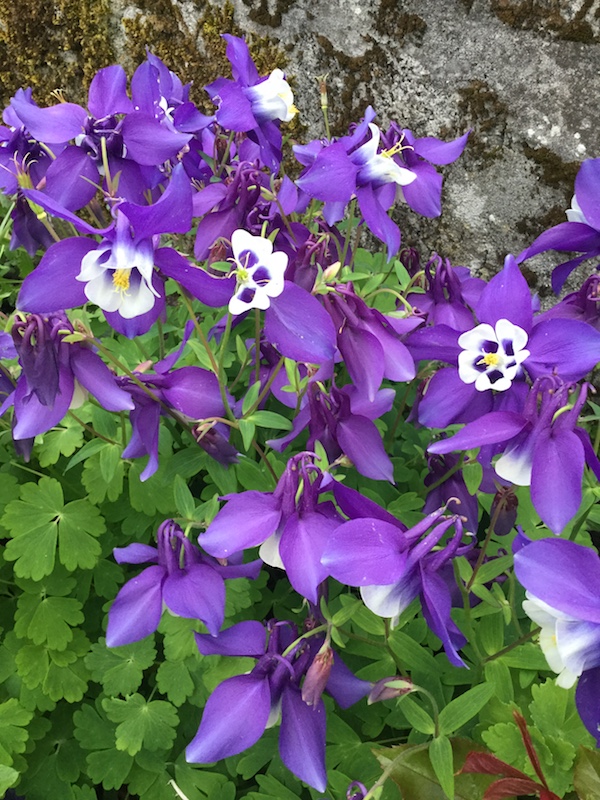 We were wrong, so very very wrong. I’ll tell you more later, but for now let’s just say I don’t think this is a costume….

There’s more to the Evil Ed story coming when we get to Dublin, but next Saturday Finn and I will be hopping on (and falling off of) some two-wheeled transportation to show you some of the sights of Inishmore. See you then!! And see you Wednesday with another quick writing update.

The Trials of Hercules is FREE right at this very moment. Today’s the FINAL DAY so hurry up and grab your copy!!!

Then there’s the trio of 99-Cent Bargains….

And The Bonds of Osteria? An extra couple days on this one…it’s 99 cents from today through 7 August* 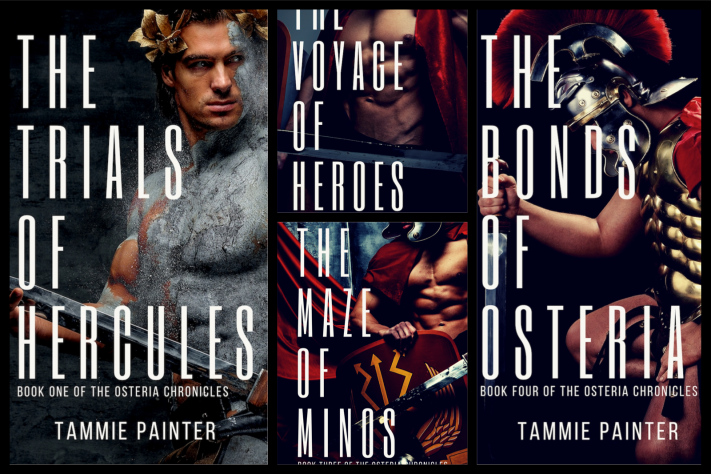 *Price available only in the US & UK Amazon stores. Many apologies to the rest of the world (it’s an Amazon thing, not a me being stingy thing).