Yes, it’s time again to hop back across the pond from Finn McSpool’s trip to Ireland for another local adventure — this time on the Oregon Coast where Finn not only tries his hand at rock climbing, but also uncovers buried treasure.

With the thermometer hovering right near 100 degrees (about 37-38 degrees C) Portland has been trapped in the sweltering temperatures of a heat wave (and after a brief reprieve, we’re about ready to embark on another one…ugh), which means about eight-five percent of Portlanders have been heading to the beach for some relief. Finn, however, wanted nothing to do with those crowds, so we made our trek to the Oregon Coast a few days before the sun launched it’s assault.

Our first stop was the fabulous stretch of sand called Oceanside. Longtime readers of this blog will remember Finn’s previous excursion to this beach and the super scary, safety-schmafety tunnel. This time we skipped the tunnel and, with Finn kicking back in the backpack, Mr Husband and I took a long walk on the beach picking up all kinds of treasure…Treasure that Finn took credit for once we stopped for a photo shoot.

It was a rare non-windy day at the Oregon Coast so Mr Husband went to frolic in the waves while I went to frolic in my temporary office to do some writing and editing (even though it was his day off, it was still technically a work day for me). Still, you can’t beat the view from this workspace.

Work done, I was fed up with watching all the watery fun people were having, so when Mr Husband emerged from the briny deep, I laid claim to the boogie board and caught a few of my own (very tiny) waves.

Despite his previous underwater adventures, Finn wanted nothing to do with the frigid temperatures of these waters and stayed warm inside my backpack (I did notice that when I got back all our snacks had done a disappearing act, hmmmm…..)

Since the snacks were gone, we ditched the sandy shores for some lunch, then it was time to hit another beach. It was here, that Finn (possibly fueled by all those sugary snacks he claims not to have eaten) got a burst of energy and proudly claimed he was a mountaineering monster. Um, Finn, that’s not very impressive.

Miffed at my scoffing, he found a new mountain to tackle (and I use the term “mountain” very loosely). Still, this did look like a bit much for such a little monster.

You, sure about this, Finn? Oh, well, looks like he is.

Luckily, there was a little rest spot on K- ….I mean M-2 before tackling the final ascent.

At this point, Finn (through grunts of exertion) was telling me to alert the media, he was about to the the first Beastie to reach the top of M-2 unaided. 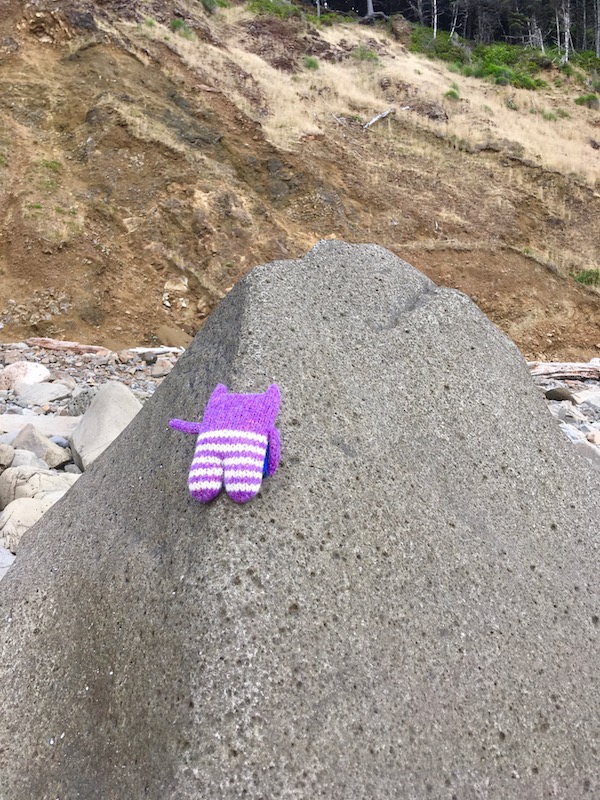 At the summit, Finn gave a speech but it was mostly about how amazing he was so I just took a quick snap and told him to watch out for hungry seagulls.

With helicopter assistance (okay, me grabbing him and putting back on the ground), Finn and I strolled around looking for more treasure and doing our part by picking up whatever plastic trash we came across. In one spot we found a plastic grocery bag half buried in the sand. We tugged on it and finally dislodged it. No whales were going to get plastic stuck in their blow holes that day.

But wait, this bag is awfully heavy. What’s inside?

Turns out this is part of a project called Tri-Cities Rocks in which people are encouraged to paint rocks and hide them for people to find. A fun and clever idea, but maybe leaving things in plastic bags on the beach isn’t the smartest or most eco-friendly idea. Sigh.

Treasure (and plastic garbage) in hand, we decided it was time to call it a day and head home. I also needed to get Finn safely tucked away before he set his sights on climbing this rock…

That’s it for this week. Finn and I will be back next Saturday with more of The Ireland Trip…this time we’re fighting off the Spanish! And I may be back next Wednesday with a special writing-related announcement. See you then!!!

Looking for a summer read? My short story collection 13th Hour: Tales from Light to Midnight is FREE all month at Smashwords. Grab your copy today!!!

14 thoughts on “Finn McSpool: Treasure Hunter of the Oregon Coast”