Beastie Self-Discovery on the Streets of Cork, Ireland

After our little side trip into local library culture last week, we’re back in Ireland this week. And while we may be bidding a sad (and buttery) farewell to Kilkenny, it’s time for new locales and for Finn McSpool to experience his version of self-discovery. Yeah, probably best not to guess what that means, just keep reading.

Our first stop on our final whirl through the streets of Kilkenny, according to Finn, was Black Adder. I need to stop letting him watching so much British comedy, because we’re actually stopping in at Black ABBEY. Since this place seemed a bit more somber and reflective than St. Canice’s, I kept Finn firmly locked inside my bag while Mr Husband and I checked it out.

This Abbey was built way back in the early 1200s and was founded by the Dominican Black Friars (hence “Black” Abbey). These fellows may have been obedient to god, but they had other opinions about more earthly authorities and so built their church outside the city walls (which we’re going to get to in a sec) so they could retain some of their freedom to come and go as they pleased. In other words, curfew, schmerfew. 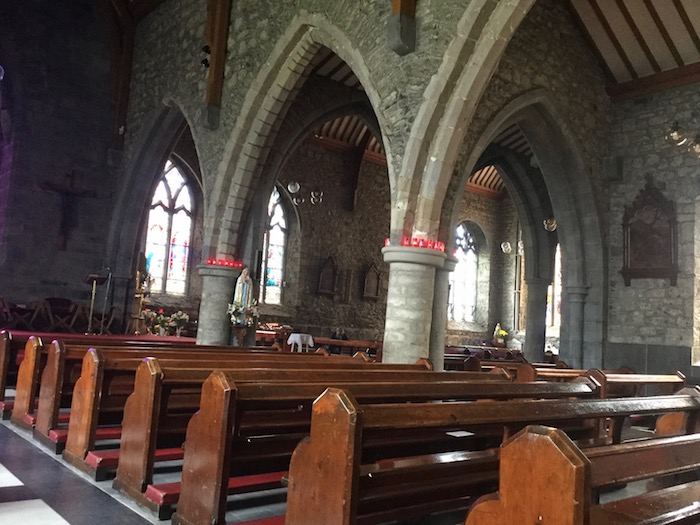 After picturing a Rowan Atkinson-esque monk thumbing his nose and making some snarky comment at a wall guard, you can step inside and marvel at the abbey’s stained glass. 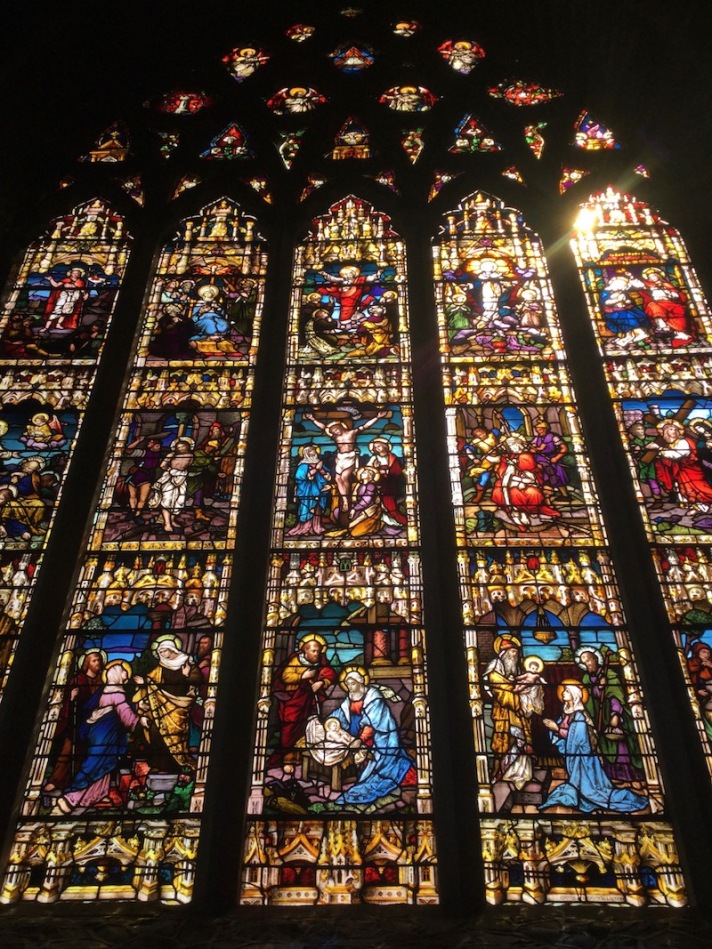 After this moment of reflection it was time to stroll down and grab some lunch in the cafe in the undercroft of the nearby St Mary’s Cathedral. Seriously, if you’re ever in Kilkenny GO there…the food is inexpensive, filling, and super tasty and the staff is warm and welcoming. This guy heard we were going and look how sad he was that he couldn’t join us.

Has anyone seen Finn? He’s being awfully quiet. Wait, I recognize that little squeal of joy. Oh man, I hope he’s not trying to ride that poor dog. Following the sounds we ended up in the grocery store where we found Finn delighting over this…an entire aisle of butter.

An argument ensued over how much butter I could fit into my suitcase (the answer being “none”) before we were asked to step away from the wall of butter.

Speaking of walls…about those city walls. They don’t exist anymore….unless you happen to look down while you’re waiting for the Dublin Coach to Cork.

Luckily we had gotten to the coach stop early, because after seeing this we followed the line and found this….

This is Talbot’s Tower, one of the nine watchtowers that once dotted the old city walls and was built back in 1270 because I guess they wanted to keep a better eye out on the antics of those Black Adder monks. Actually, within Kilkenny, about one-quarter of the old city walls exist…you just need to know what you’re looking for.

Despite this little distraction, we managed not to miss our bus and a few hours later we had landed in Cork. After finding our room (rented out by possibly the worst AirB&B host EVER) it was time for some more exploring (mainly just to get away from our creepy host). Once we’d made a beeline for some grub at the English Market, we sauntered up the main thoroughfare.

Finn then got very excited and I feared we were going to have another butter incident. But instead of shouts of buttery goodness, Finn was jumping up and down yelling, “It’s me! It’s me! The Irish love me so much they’ve named a corner after me!!” This is what he’d just seen…

In times like these, it’s best to hope the excitement will wear your monster out rather than try to explain to him that Finn’s Corner is actually a chain of sporting goods stores, not a way to honor a certain Beastie. However, I soon regretted not bringing Finn back down to earth as our explorations brought us here….

Finn, really? Get out of the way. There, that’s better….

This garish neo-Gothic monstrosity was built in 1879 and (unfortunately) is named St. Fin Barre’s Cathedral (or FinnBarre, or FinnBarr depending on how many Scrabble tiles you have). Yeah, you can see where this is going. 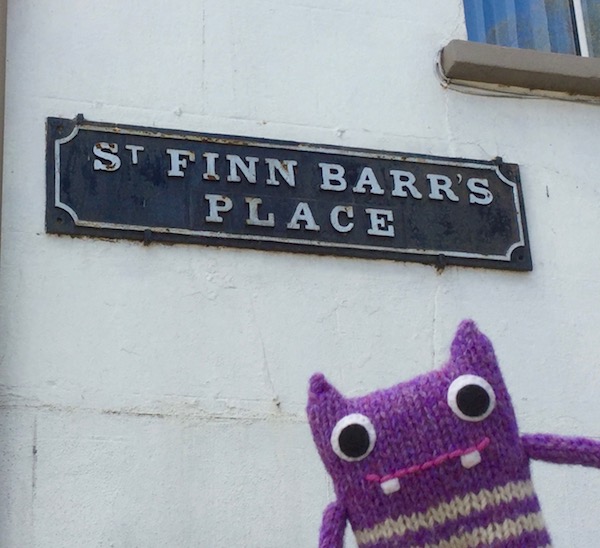 “They love me so much they dedicated an entire church to me!!!” Rather than be humbled by this, Finn started strutting around the grounds saying “Worship me!!!” Luckily I’d gotten a good dose of espresso into my system and nabbed him before he reached the group of visitors he had been heading toward.

With a little explanation that, while there aren’t many Finns in the US, Finn wasn’t all that unusual a name in Ireland. Yes, there was a bit of pouting over this, but it’s hard to keep such an upbeat Beastie down for long. And by “down” I mean that literally because when I next saw him, this was happening….

Any high-flying adventures for you this week? Any AirB&B horror stories? Be sure to drop a comment below.

Finn and I will be back next week with a local beach-based adventure before getting back into the Irish swing of things in a couple weeks with a trip to the southern coast of Ireland and an amazing place for a game of Beastie hide-and-seek. See you then!!!

Looking for a summer read? My short story collection 13th Hour: Tales from Light to Midnight is FREE all month at Smashwords. Grab your copy today!!!

18 thoughts on “Beastie Self-Discovery on the Streets of Cork, Ireland”