Yes, that’s CANICE, not cannabis, and by high, I mean literally high, not figuratively. Now that that’s cleared up, let’s take a tour of another sight in Kilkenny, Ireland.

St. Canice might almost sound like it’s named for a woman, but the saint in question is a fellow whose Irish name was Cainnech. Mucking through the trickery of Gaelic pronunciation that sort of comes out to the English equivalent of Kenneth. But old Cainnech must have been a casual kind of guy who preferred “Kenny”. Match that up with “cill” (pronounce “kill”) which means “church” and you have Kilkenny…the Church of Kenny. Yeah, I know, St Canice’s Cathedral sounds way more official and much less reminiscent of Footloose or Top Gun.

As with many European churches, there’s been a whole lotta worshipping going on at the location of St Canice’s since the 6th century. The current building dates from the 13th century and is full of all those Gothic stereotypes such as big columns, stained glass, and pointy arches to keep everything from falling in on itself. 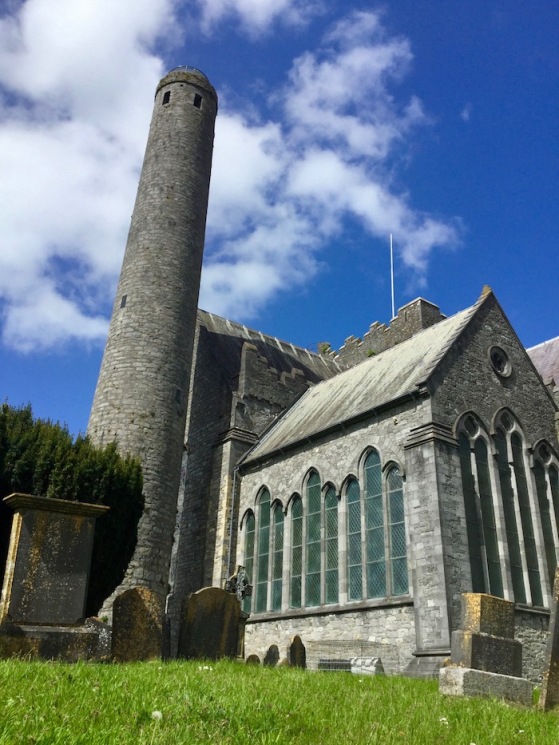 Until of course you get a witch involved.

Dame Kytler Brings Down the House

Well, actually it might have been her maid, but we’ll get to that. Alice Kytler was a clever and intelligent woman, and may or may not have been a bit of a femme fatale. She liked her men wealthy, but she didn’t have to like them for very long because her husbands seemed to have nasty habit of dying. When Husband Number Four was marching his way ever closer to the graveyard, the Bishop Ledrede decided to take his woman-hating frustrations out on her.

He wasn’t alone in his scheme to prove Alice a witch. Alice’s own son gave testimony of his mom chanting curses at him (well, yeah, you’re a jerk of a son, what do you expect?). With that good ol’ medieval logic, Alice and her maid were convicted of being witches and sentenced to die.

Alice was self-serving enough to skedaddle off to England, but the poor maid was burnt at the stake (Ireland’s first witch burning…mark it on your calendar!). As penance for being a jerk, William was to repair the cathedral roof (probably using his mom’s money because that’s the kind of guy he was). But the maid got her revenge and this roof collapsed soon after it was complete.

Anyway, back to the cathedral

There’s plenty to see inside the cathedral such as flying cows in the chorister….

…and as I was wandering I noticed something that looked very familiar….an anchorite’s door.

See those little doors off to the left? A woman would be locked in there to “honor” god by never seeing another human being and being handed her food through a tiny slot (I do not want to think about the disposal of the end products of those meals). The anchorite’s door was especially interesting since I’d just re-read (Christopher Moore’s novel Fool, in which an anchoress has a very important (and acrobatic) role to play. And of course it reminded me of this post on Daze & Weekes all about the wild life of another anchorite.

Of course, you don’t want to get too distracted by books and blog posts and anchoress’s bowel movements when you’re meant to be keeping a monster out of trouble. When I turned around Finn was gone and I was really hoping he hadn’t found a way into the anchorite’s little hutch…although locking him away would keep him out of trouble.

Instead, I found him trying to relive his role as Bellerophon on his new steed “Pega-Cow”.

Once I told him the possible penalties for his pagan behavior in an Anglican church, he hurried down and came across a guy taking a nap. I didn’t have the heart to tell him the nap was of the permanent variety.

This is (was) James Butler, yes, the same Butler family who kicked back at Kilkenny Castle. He’s lounging next to this cozy couple, Piers Butler and Margaret FitzGerald…

…and their little dog too! 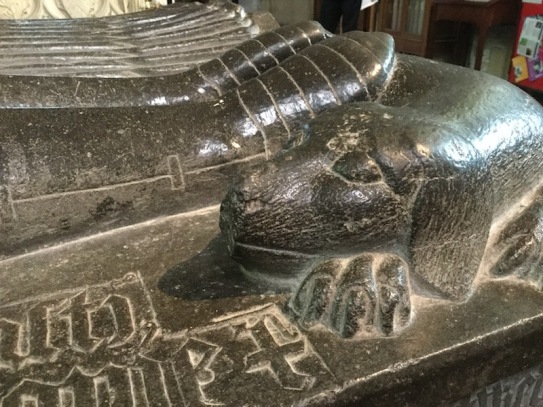 Piers and Margaret’s was an arranged marriage, but it seems to have worked out. I mean look at that grin on her face despite the very Malificent headwear and the pesky monster interrupting her nap.

The Real Reason We Went to St Canice’s: The Tower

As you may have noticed above, there’s a round tower next to the cathedral. It dates to around the 8th century and stands 30 meters high. It’s also one of only two or three round towers you can still climb in Ireland. Did we climb it? Yep. Although Finn was very scared and hid in my backpack the whole time. 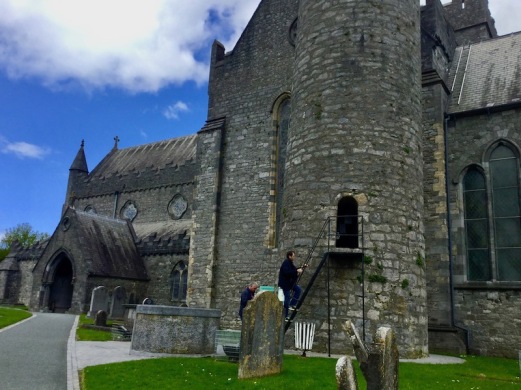 As you can see, the door to go in is tiny…and so is the interior. The base is only 15 feet in diameter, but gets narrower and narrower as you go up. And let me tell you, when you get to the top…it’s a long way down!

But from the top you get a 360-degree view of Kilkenny….

Finn was having none of it, especially as it was crazy windy at the top and he’d left his flying cow back in the cathedral. However, once we made our way down and back inside, he found a Beastie-sized tower he was far more comfortable with…

Thanks for popping by every one and have a great weekend. Finn will be back next week with a random sampling of Kilkenny sights!! 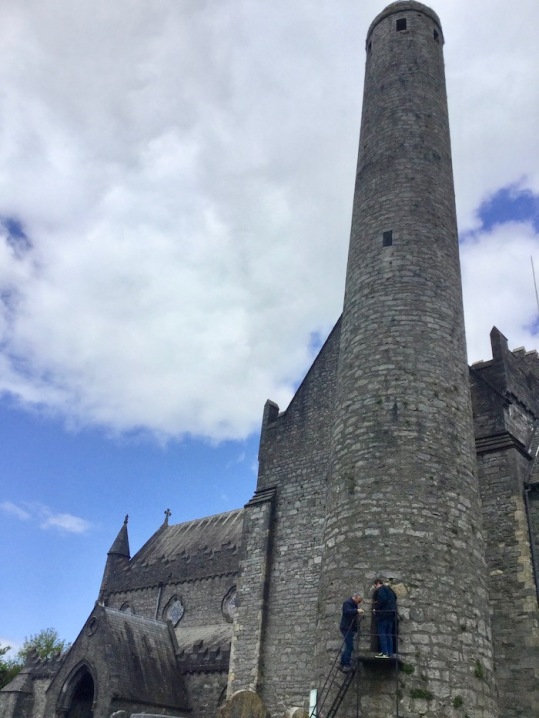 22 thoughts on “Getting High in Kilkenny: St Canice’s Cathedral”