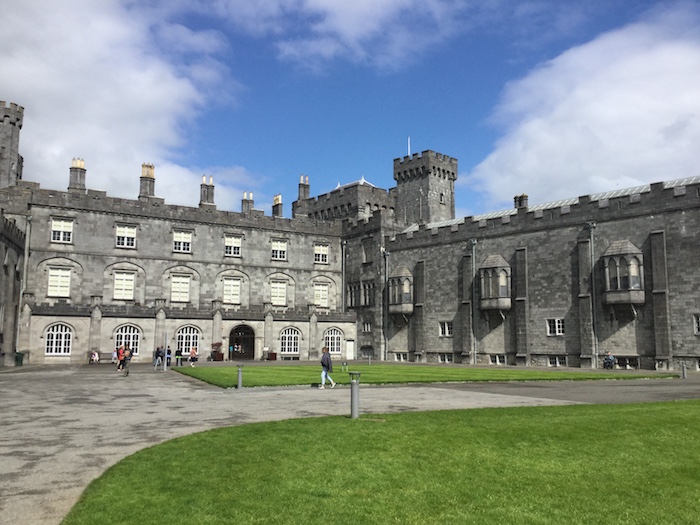 Now that Finn McSpool gave Bloglandia a rundown of some of his favorite parts of our trip to his homeland, it’s time to start delving into a series of trip reports about all the sights he saw in Ireland, the activities he undertook, and the “situations” he is famous for getting into (and out of, thanks to my watchful eye and quick reflexes).

We’ll kick things off in noble style with Kilkenny Castle.

The setting of this castle in a massive park and looking over the River Nore doesn’t get more scenic, although “ooh, this is a defensively strategic position” was probably more along the lines of what was going through the heads of the folks (the Anglo Normans) who first built a wooden castle on the site in 1173.

Realizing that maybe, just mayyybe, wood wasn’t the best material for a stronghold (or for longevity in the Irish weather), a stone castle was slapped up in the early 1200s. This square (aka “very Norman”) castle came complete with towers at each corner. Three of these towers are still standing (we’ll get to what happened to the fourth).

It’s this 13th century bit of the castle where Finn and I (and Mr Husband too) stormed the castle through the ancient undercroft’s sallyports (narrow little corridors where soldiers dashed about). Just as we thought we’d be able to claim the castle as our own, we were caught…luckily Finn makes friends easily and this guard let us continue along our tour. Let the storming resume!!

Being in the market for a nice little family home, James Butler, Earl of Ormonde, bought Kilkenny Castle in the late 14th century. Apparently the family rather liked the place because they stayed put for over 500 years.

It’s at this point in our tour that Finn started asking about building a time machine, explaining that time travel would probably be easier than laying siege to Kilkenny Castle with no weapons (it’s so hard to fit a good poleaxe in your carry-on, am I right?). See, if we had a time machine that could take us back to 1967,  we could have purchased Kilkenny Castle for only £50. Talk about your bargain souvenirs!

But since I forgot to bring along my quantum physics manual and time machine toolkit, we just had to satisfy ourselves with a wander through the restored castle.

You can’t have a castle without some giant tapestries. These were so big it was hard to get a good picture of them…

…especially when a certain monster photobombs the scene.

Of course, both Finn and I were giving some extra thought to that time machine construction when we entered this room… 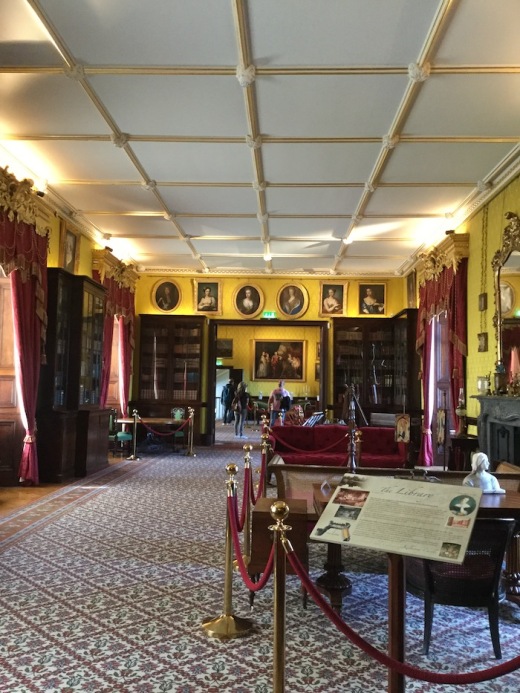 …yep, that’s the castle’s library. I could settle in here quite nicely on a rainy day.

Why was the castle so cheap? Well, castles make good targets for disgruntled people. During his little tantrum, Oliver Cromwell did a number on Kilkenny Castle (which is why there’s only three of the four original towers).

Some restoration and major rebuilding were done in the 17th century (which turned the castle into much of what you see now), but during the Irish Civil War in 1922, the castle (due to its inhabitants sympathizing with the British) was attacked and damaged. To ensure the castle got the care it needed, it was sold in 1967 for a mere £50 and put in the hands of Ireland’s Office of Public Works.

Kilkenny Castle has a few well-known bits including the striking Moorish staircase that features plenty of places for a certain monster to practice his hide-and-seek skills.

There’s also the Long Gallery, which is, well, long and a gallery. No false advertising here… 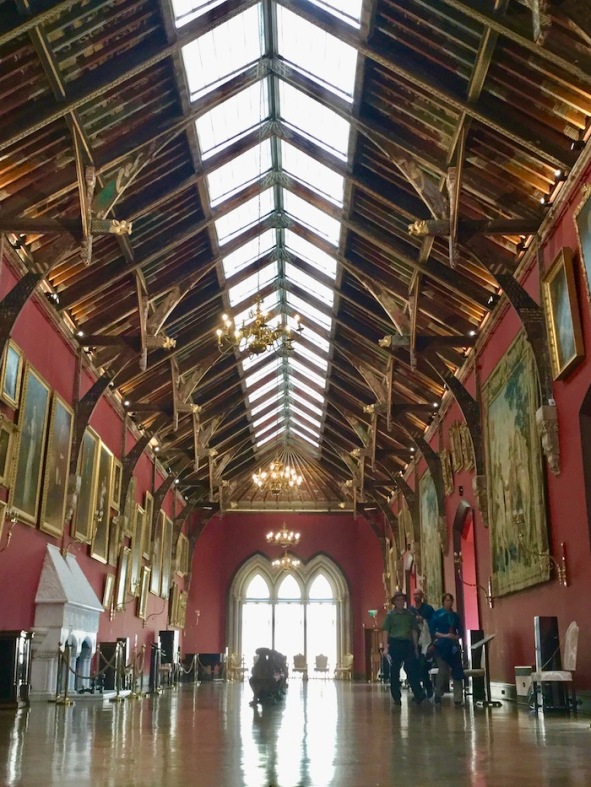 The portraits in the gallery are mainly of the Butler family through the ages, but the impressive bit is when you look up at the hand-painted rafters. 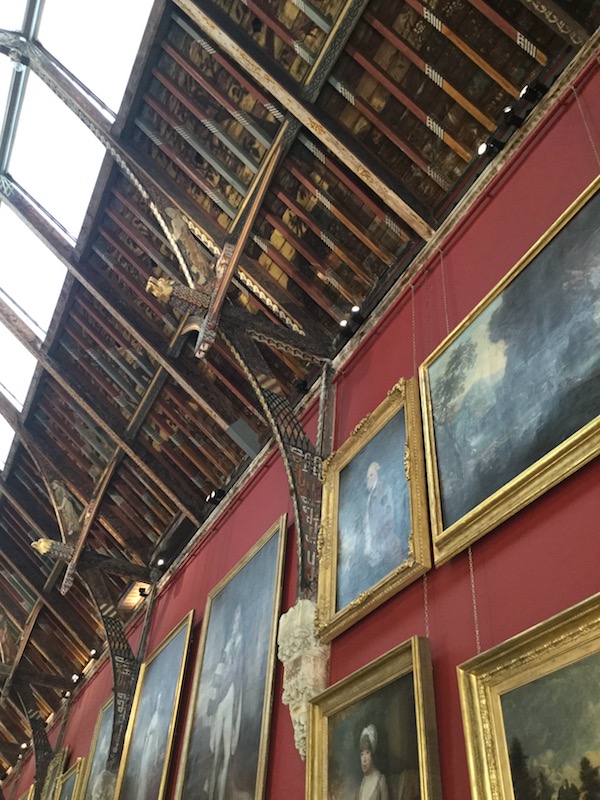 Besides the building itself, the grounds of Kilkenny Castle are amazing (and free). We were lucky enough to be staying in the lovely Carriglea House (which I highly recommend. The B&B is situated smack dab across the street from the castle’s parklands where you can laze about on the grass or stretch your legs on a walk along the river as part of the Trail Kilkenny system. We were still jet lagged so didn’t cover more than a few kilometers of the path, but did manage to walk off a few calories of Carriglea’s wonderful breakfasts .

Phew, and that was just Day One! There’s plenty to cover on this trip so, if the interest from my readers is there, I may consider delighting the blogosphere with a Finn post every Saturday instead of every other Saturday. Regardless, I’ll be back next week with some musings on how I’ll be moving forward with my writing world (and possibly this blog).

What do you think? Do you want to see Finn’s mug on a weekly basis, or is twice a month enough for you? Oh, and does anyone out there know how to build a time machine?