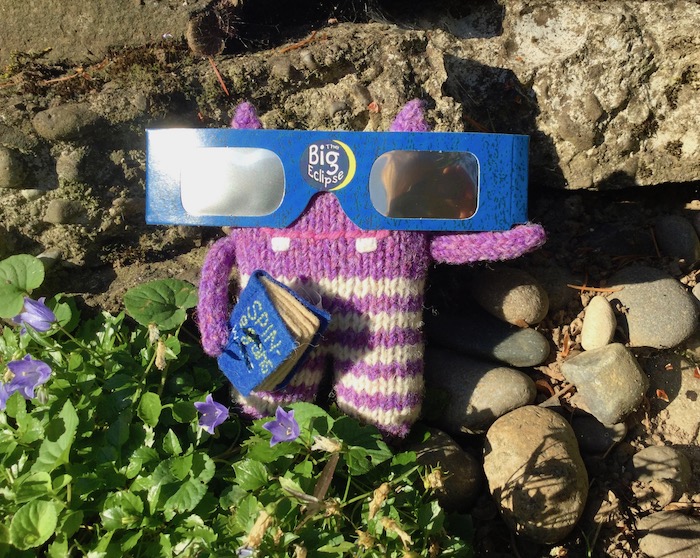 Total Eclipse of the Finn

As you may have heard from what seemed like every news source on the planet (and maybe even beyond), the U.S. had itself a little solar eclipse last Monday (we won’t go into the total societal/scientific/political eclipse that’s been happening since a certain oompa loompa got sworn in as president).

Oregon was the first state the eclipse (the solar one) hit and you would have thought we were back in the Middle Ages with the way the local news was going on. Seriously, a crazy villager with a “The End is Nigh” sign could really take a lesson or two from the local newscasters.

First, the traffic fears: Don’t leave your house! Don’t drive anywhere! Then the food supply paranoia: Stock up, you won’t be able to get to the grocery store! Stores will be out of stock for days afterward! Add in the worries of how communities in the totality zone were going to handle the waste, how fire crews were going to control wildfires, how the grid was going to explode with so many people needing electricity! Give me a crazy villager any day.

Portland wasn’t in the totality zone, but we were at the 99.2% of totality mark. So Mr. Husband and I decided the driveway was a good enough spot to view the eclipse. And of course, a certain purple Beastie didn’t want to miss out on the event.

Finn, not wanting to make an emergency trip to the optomologist, snagged my eclipse glasses and gave them a test run.

Hmmm, those are a bit big for you. Maybe we should fashion something a bit more monster-sized. 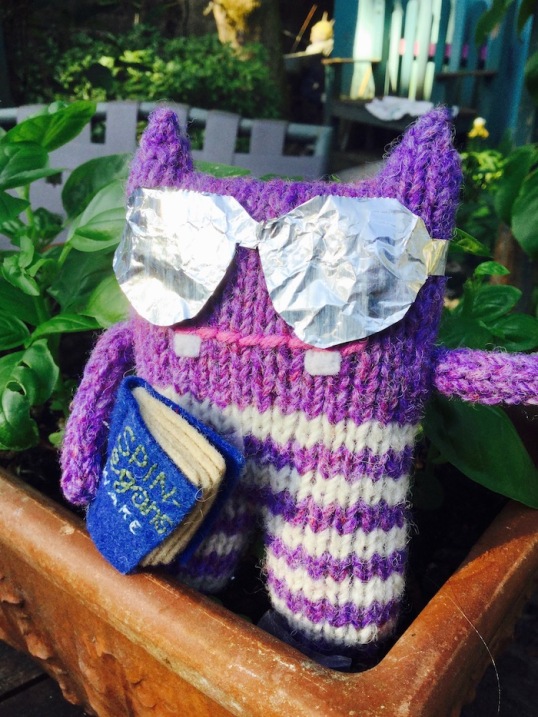 -Oh, um, quite stylish. I mean as far as aluminum chic goes, you’ve nailed it.

With his new bit of bling on, Finn and I went to pick out a good spot on the driveway for eclipse viewing. Finn, possibly looking for more wine ingredients, parked himself next to the strawberry plants.

Oh look, a couple other eclipse fans stopped by.

Spots picked out and tea in hand (well, in cup, in hand would be messy, and painful), we waited for the moon to eat the sun. Not only was it quite warm sitting on the pavement, but it was also a little boring. So, I experimented a bit with the eclipse glasses over my iPod’s camera. Yep, looks like a big yellow spot.

I tried this again as the eclipse was about a quarter of the way into the show, but when I looked at the photo I’d taken, it looked the same as the pre-eclipse photo above. Mr. Husband said the people on the news said taking a photo that way wouldn’t work, so I gave up trying. Later, with a little editing of the light conditions, I could actually see the moon starting to nibble it’s way through the giant sun cookie (mmm…..sun cookie). This proves you can’t trust the news.

Anyway, did I say I was feeling toasty warm earlier? Well, that changed. Dramatically. By the time of the full eclipse, I was shivering and begging the sun to come back. Speaking of, I better check on Finn and make sure his wool is keeping him warm.

-Finn? Finn? Where are you? Finn, what are you doing in there?

-The sun went away! We’re all going to die! Ra hates us!

-Finn, it’s okay. If you listened to StarTalk like I told you to, you’d understand how this worked. See, because of the moon’s size and the sun’s distance from us, astrophysicists can calculate the—-

-You sure it’s coming back?

-Want to go watch the rest?

-Um, I lost my glasses in the hostas.

-It’s okay, you can use mine. Now, go get comfy on your beach towel and watch out for the cats, they might think it’s breakfast time again. 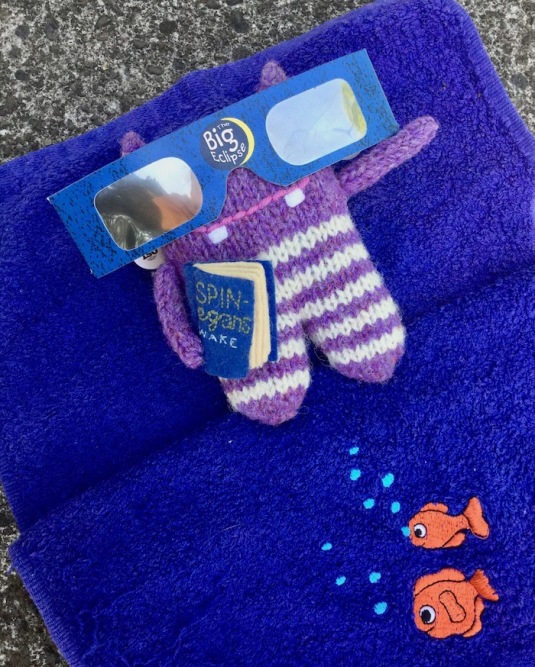 While the eclipse was pretty cool (literally and figuratively), that 0.8% really did make a difference and I was surprised at how light it still was (although it was dark enough to trigger the street light to come on). Also, after being used to the skies being ominously darkened by wildfires in British Columbia and Central Oregon recently, the light change during the eclipse didn’t seem much different.

Still, we all survived the eclipse. The grid didn’t explode, stores actually ended up overstocked with food, and the only truth the media soothsayers uttered was the four hours of immobile traffic people sat in trying to get home from the totality areas.

How about you? Any eclipse stories to share? Any monsters hiding in your hostas? I’ll be back next Wednesday with a little work update (sorry, I was too busy to post this Wednesday) and next Saturday Finn will be back with another summertime adventure. See you then!!

17 thoughts on “Total Eclipse of the Finn”