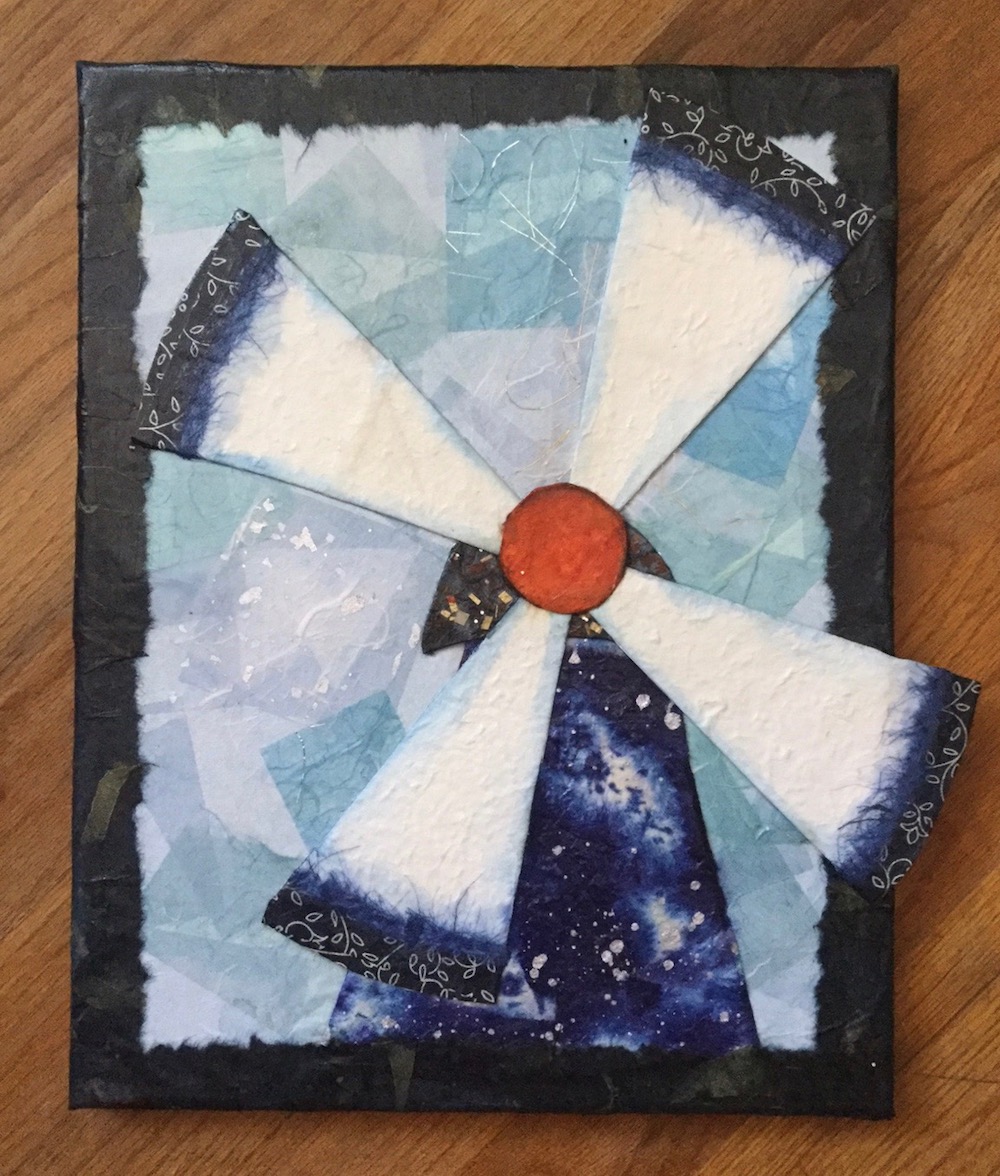 Time for You to Help the Wonky Windmill

Sometimes you get an idea in your head for a project and it turns out super spectacular. Other times, you need to call in the troops for a bit of assistance. The latter is the case with my latest collage whose current name is “Wonky Windmill.” I’m hoping my fabulous readers can help de-wonkify this bit of Dutch engineering.

My collage (created with mulberry paper on canvas, some others can be seen here) started out well. I’d had an idea to do a windmill for quite a while, not only to celebrate my Dutch heritage, but also because I simply like windmills (perhaps they call to my DNA). Since I wanted to give it a Dutch look, I opted for the blue and white colors reminiscent of Delftware, then I’d throw in just a tad bit of orange (not too much, orange is far too Trumpian for my taste).

As you can see, I slapped on a nice baby blue for the background. Some pieces of the mulberry paper have metallic threads and silvery bits embedded in them giving a little bling to the background. As the pale blue was just too stark, I decided to frame the whole thing with some deep dark blue.

Next it was time to build a windmill from the ground up. I wanted the windmill itself to have a fun, sort of free form look to it and to stand out from the background, so I quickly sketched the base and cap of the windmill on some bristol board and worked some collage magic over the pieces.

The blades were a challenge because I needed them to be showy, but didn’t want them entirely white. I probably spent WAY too long sifting through my piles of paper to finally come up with blades made of a textured white tipped with a blue paper that has some swirly scrollwork on it. This still looked too plain, so I got out the watercolors and put just a hint of blue on the edges of the blades.

Then, it was time to put it all together. I can’t tell you how many times those blades got shifted around. At first I was trying to keep them fully contained on the canvas, but to do so placed the windmill smack dab in the center of the piece which just looked stupid. I finally came up with the idea to have one blade going rakishly off the canvas. During this process, Hurricane Tammie laid devastation to the kitchen table.

With everything glued into place, all that need done was to put on the orange center of the windmill and call it done.

Too late I realized I placed the windmill too far off center leaving a weird empty gap at the left hand side. I tried to unglue the lowest blade to shift it up a bit, but that thing was stuck tight (at least I know this isn’t going fall apart any time soon).

And here’s where I need your help. I’ve tried various ideas to fill in the emptiness, but most looked messy, while others looked idiotic. The only notion that seemed to work was to have some birds (aka “flying m’s”) in the sky. Because I couldn’t decide which looked best, I didn’t glue anything down and am now leaving it up to you to pick a favorite (since you all did so well with the book cover voting).

So, looking at the options below do you like the background left as is (A), the background with the birds all to the left (B), or one of the birds a bit higher up (C)? The survey form is just below (note, some of you in WordPress Reader may not see the form, you’ll have to follow this link to go to the post on my website to cast your ballot!). Of course, if you have another idea, feel free to leave it in a comment.

Thanks for your help everyone! Finn and I will be back Saturday with his monstrous foray into a DIY project!

14 thoughts on “Time for You to Help the Wonky Windmill”