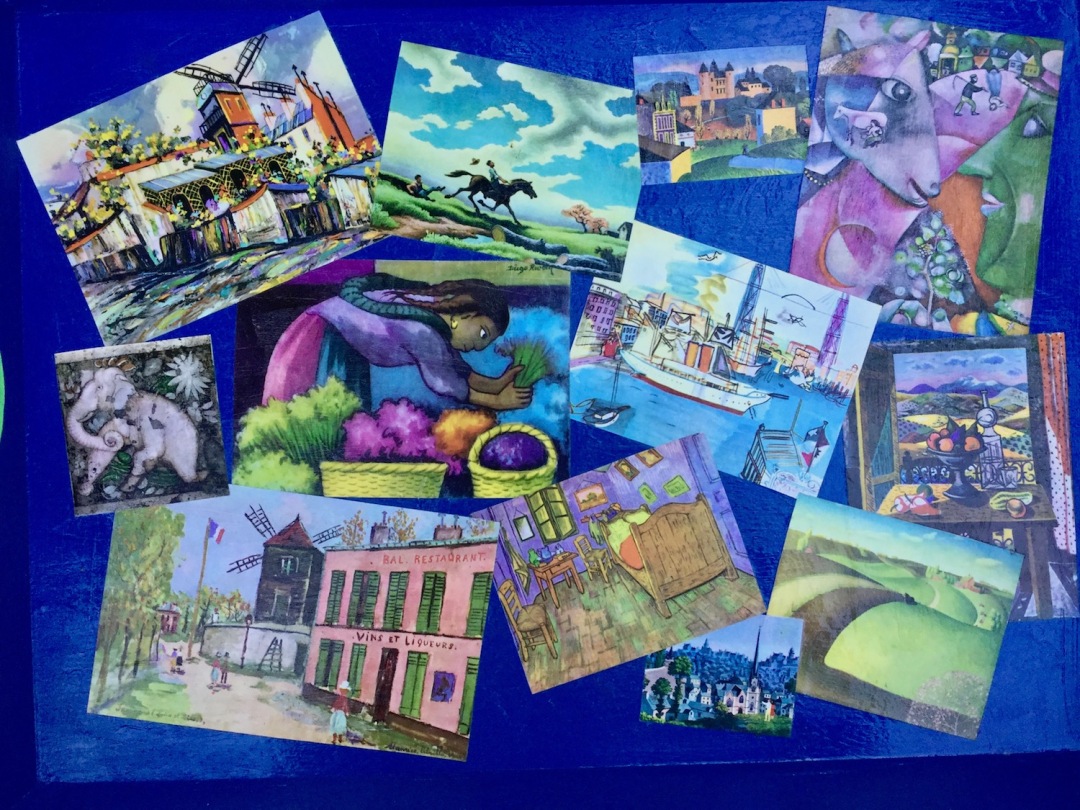 One Man’s Junk Is My “Tray” Bien Treasure

Normally when I hear the phrase “One man’s junk is another man’s treasure” I think, nope, it’s all junk and perhaps Mr. Another Man needs some intervention for his hoarding issues. However, while strolling the neighborhood the other day, I came across a piece of someone’s junk that I knew had a bit of treasure potential.

The poor discarded thing that had been left by the side of the road with a free sign on it like an ugly child  had once been a serving tray. From the amount of dirt crusted into its corners, I think its previous owner had been serving up mud pies to someone. With a bit of scrubbing, the dirt was washed away to reveal that the tray was in really good shape. It just need a bit of Tammie Treatment.

I scoured through my acrylic craft paints (most of them discards from some project my mom had attempted) and found a big bottle of glossy royal blue that would make a perfect background for what I had in mind: a colorful tray with a collage in the base.

After a couple coats in the base, it was time to drag out my Future Collage Folder that’s chock full of magazine scraps. At first I had thought of just laying down some funky patterns for the tray’s collage, but I had forgotten about the treasure trove Mr. Husband had provided a few weeks previous: an old art print catalog for me to cut up!

And when I say “catalog,” I’m not talking about some flimsy LL Bean thing. This was a bound hardback book with super heavy slick paper and full color images of art ranging from ancient to modern, from impressionism to abstract, from Vermeer to Van Gogh. With scissors in hand, I had gleefully gone through the 500 or so pages cutting out anything and everything that grabbed my eye then tucked the massive pile I ended up with away in my Future Collage Folder.

I started by pulling out anything that went along with the blue I had used. I was looking for pieces that would work well together and had a similar color scheme before I picked out the trim colors for the rest of the tray. After much debate, and after seeing how many pictures I could squeeze into the base, I decided to go with trim colors of pink, bright green, and purple.

Luckily, it’s been very dry in Portland, so my layers of paint dried in little time and I was able to start gluing. This was the worst part. My pictures kept buckling and I was worried about smoothing them out too much for fear of them tearing or wearing away the image. Eventually (after much cursing at myself and my glue) I got everything flattened (well, flat enough). Finally, I coated the base with a layer of clear acrylic to make sure everything stays in place.

After a few touch ups and a bit of drying time, I had a new treasure! Tray bien, indeed!!

Thanks for stopping by. See you Saturday with Finn McSpool’s day of Celtic fun at the Portland Highland Games!