Beasties, Bears, and Other Venetian Creatures

As you may know, earlier this week was Independence Day in the U.S.. Due to my disgust and embarrassment with our horrible excuse for a president, I had no intention of celebrating the holiday, but I did manage a little getaway during the long weekend since my dad invited me to the wild and crazy town of Veneta, Oregon.

Okay, Veneta (not to be confused with the region of Italy called the Veneto) isn’t really all that exciting, but it’s where my dad has set up camp in his RV for the time being and the tiny town has some fancy new lodgings he wanted me to try out. So, with invitation and reservation in hand, Mr. Husband and I headed south. And of course, Finn had no intention of being left behind.

We spotted our first bit of excitement while cruising down I-5. A bear sighting! And not just one bear, but four. Sure we have bears in Oregon, but it’s pretty rare to see them in broad daylight on the freeway. Even odder to see them wearing colorful overalls and riding on the back of a truck.

Once in Veneta (about 2.5 hours south of Portland), it was time to check out the lodgings my dad had booked us in. Yurtel Veneta has only been in business about a year. The (very talkative) owners have taken yurts and dolled them up into rooms nicer than what you’d get at most hotels.

We were booked in the red yurt that has a rose theme. The other two yurts have a Camelot theme and a Yogi the Bear theme (more bears!!). 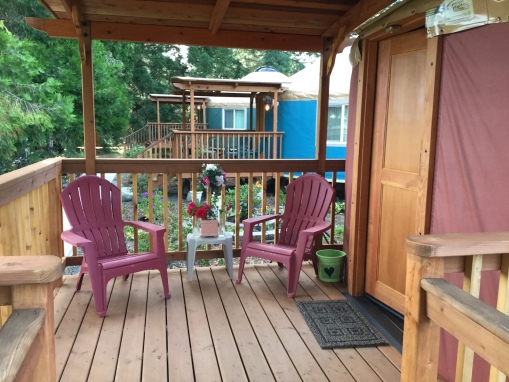 Of course, after being cramped up in the car, Finn made a dash for the bed to stretch out.

The bed was nice, but then he discovered the bowl of chocolates on the side table. The chocolates didn’t last long after that. 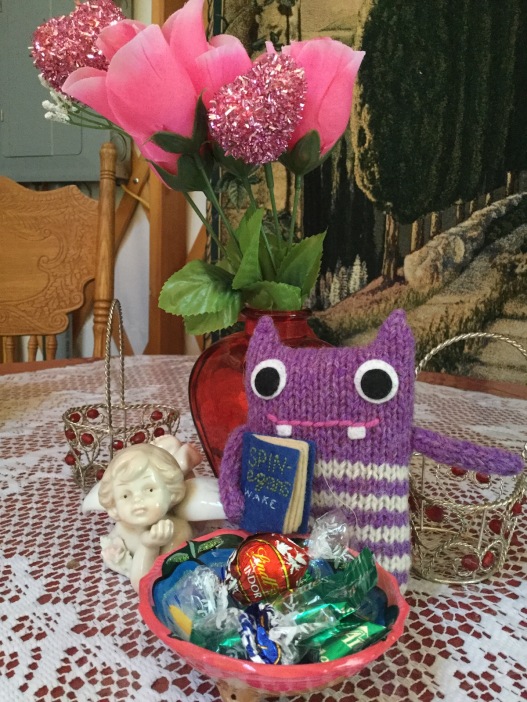 Once settled in, it was time to go see Dad. The park he’s in is on Fern Ridge Reservoir. The 9000-acre reservoir was created around 1942 with a dam to help control flooding and to save water for irrigation and recreation in the summer. A couple years ago when we went, drought conditions were such that the reservoir was completely empty (not very scenic, let me tell you), but with the super wet and snowy winter we had, this summer the reservoir is brimming with water. 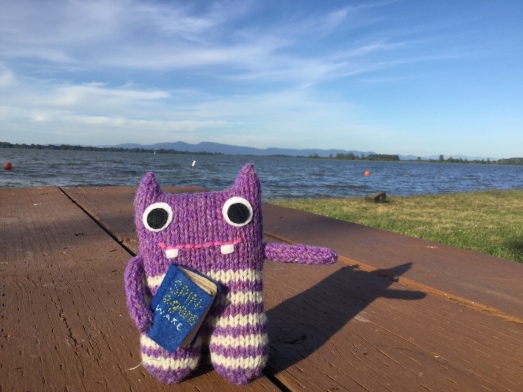 As beasties tend to do, after his lakeside photo shoot, Finn scrambled up a tree along the shore. Then I noticed the sap oozing down the right side of the tree and demanded he get down before he became fossilized in amber (and wouldn’t THAT confuse future archaeologists!).

After his explorations, it was time to chitchat with my dad and stepmom. Ever the social butterfly with other creatures, Finn quickly made a new friend.

Finn, meet Cassie the Papillon-Chihuahua. She used to be evil and vicious (seriously), but she has turned into a big baby who wants nothing more but to eat restaurant leftovers, jump from lap to lap, and get belly rubs…oh, and to meet Beasties.

Hope you enjoyed this little tour. I’ll be back on Wednesday with my latest creation (even though I’m still not sure what that creation will be).

How was your week? Go anywhere exciting (or not so exciting) recently?

14 thoughts on “Beasties, Bears, and Other Venetian Creatures”