Crossing the Line in London

During our recent trip to London, Mr. Husband and I seemed to be making up for all the things we wanted to do last time (way back in 2013), but couldn’t manage to squeeze in. Besides a wander over Hampstead Heath and a spiraling climb up The Monument, we wanted to straddle two worlds in Greenwich. And I just had to see what it was like to walk across the bottom of the Thames.

Because our vacation rental was way out in west in Kensington, and because Greenwich is way out east (and on the other side of the river), and because we’re tourists, we decided hopping a boat would be a more interesting way to get to Greenwich than making five Tube transfers.

Thames Clippers cruise up and down the Thames most of the day. It’s stupid expensive if you just show up and buy a ticket, but if you can wrap your brain around the intricacies of the Oyster card and Travelcard, you can ride the boat for half price (or close to half).

The boats are big and wide, so even the wimpiest landlubber is unlikely to get sick. It is a bit slow since it’s public transportation and does make stops (like a bus) several places along the river. But if you grab a seat up front, you get terrific views of the London shoreline (or you will if the window isn’t being splattered by rain).

Heading Off to College

Since we had no idea where anything was (our guidebooks had no maps of Greenwich) one of the first places we stopped was the visitor center, where we were greeted by this handsome fellow:

Maps in hand, we headed out to roam the grounds of the Old Royal Naval College. This was once the site of the Tudor playground known as Greenwich Palace. The palace was demolished long ago to make way for Greenwich Hospital around 1700. The hospital (designed by Christopher Wren) was actually a retirement home for seamen and included a chapel and a dining hall, named the Painted Hall for its super fancy painted ceiling. In 1873, the hospital kicked its residents out to make way for the Royal Naval College to educate naval officers.

As we can’t seem to avoid a little bit of bad vacation luck, the Painted Hall was coated in scaffolding for renovation. and we couldn’t see it without coughing up a large number of pounds for a tour. Ah well, the buildings themselves were still quite photogenic.

Greenwich is also the home of the Royal Observatory. In 1675, Charles II decided he wanted to have a royal astronomer so he needed a place for the guy to work. Christopher Wren (of course) got the commission and the observatory opened for business with John Flamsteed taking the position of Astronomer Royal.

When Britain decided she wanted to rule the seas, she realized it might be handy to know where in the world her sailors were. This generated a huge amount of scientific study and eventually the longitude problem was settled. Located at (and running through) the observatory, the Prime Meridian marks the zero point for longitude, so when you straddle the line you have one foot in the West and one foot in the East. It sounds rather extraordinary, doesn’t it. Well, scientifically speaking, it absolutely is, but really, it’s just a line in the ground.

You can go in the observatory for a somewhat hefty fee, but if you only want to see the prime meridian, keep your eyes open for a rather plain iron gate just before the observatory entrance. Slip through this gate, walk a few steps, and you can see (and cross) the line for free.

Back Down the Hill

After our tour into the East and back to the West, we headed back down the hill to see two other Greenwich sites before our stroll across the bottom of the Thames. Mr. Husband wanted to pop into the National Maritime Museum. I’m not super keen on maritime museums, but I did admire the old ships’ prows and I found a little boat I might like to have.

Our final stop was the Queen’s House. No, not THAT queen. This is the former home of Anne of Denmark, wife of James I. How’d she snag this cute little palace? Rumor has it that Jimmy swore in front of her and to make up for it he gave her a palace. Guess the florist shop was closed. The “house” was designed by Inigo Jones in 1616 and was a royal residence until 1805 when George III donated it to house the orphans of seamen.

Now, the palace serves as an art gallery and is fun to wander from room to room reading about what each of the vast spaces had once been used for. The palace also houses the very lovely Tulip Stairs (also designed by Jones), which would have been a great photo op if the light had been behaving.

Finally it was time to take our lives in our hands and walk across the bottom of the Thames. Okay, maybe it would be more correct to say “under” the Thames. Long before the Channel Tunnel, Londoners needed to cross waterways because workers had to get back and forth to work from Greenwich to the Docklands and the Isle of Dogs. There had been a ferry service, but apparently it was too expensive for workers and too unreliable in a day when bosses would fire you for the least discretion, including tardiness. Construction on the Greenwich Foot Tunnel started in 1899 and took three years to complete.

Since I love anything “under” (give me a crypt and I’m a happy tourist), I HAD to do this river crossing even if I was half dead after a long day of sightseeing. Down down you go (you can take an elevator or stairs) and then you’re in a 9-foot diameter tube…and you cannot see the end. The 50-foot deep tunnel is 1215 feet long and is amazingly water tight. It didn’t even feel damp or humid and no action-movie style cracks developed that sent us running for safety.

One we emerged from under ground, we were dead on our feet and decided to take the boat back. Since the nearest dock to our temporary home was Westminster, I figured we might as well climb the stairs, brave the rain, and take our requisite photo of Big Ben. 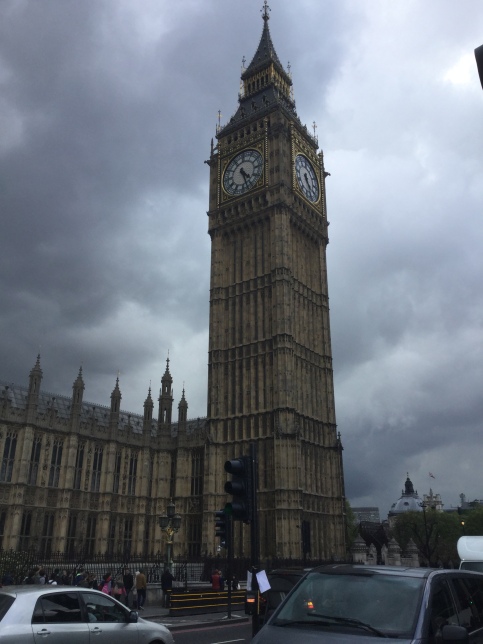 Done and done, it was time to hop the Tube home and kick back.

What about you? Ever walk across the bottom of a river? Have any favorite forms of London transportation? Share your thoughts!

15 thoughts on “Crossing the Line in London”