A Rose by Any Other Name…

No, I haven’t gotten on the Alternative Facts bandwagon by coming up with some Alternative Shakespeare. Although maybe some of my social media followers have. What in the world am I rambling about? My new piece of colored pencil art, of course.

Starting Out by Having Fun

After checking off Day One on the journey of my latest bit of work, I took a photo and posted it on Facebook and Twitter asking people to guess what it might be.

Answers were quite heavily food-related – baguettes, bacon, and fries among the guesses – which makes me wonder if everyone was responding when they felt a bit peckish. One person got in the right Kingdom (that being the Plant Kingdom) with a vote for bananas. (Come to think of it, since fries are made from potatoes, I suppose the “fries” guess was also in the Plant Kingdom.)

Finally, a plant-loving follower guessed “flower.” Since I’m not enough of a stickler to demand a more precise answer, that guess was the winner. Okay, all she won were bragging rights, but you can never have too many bragging rights, can you? 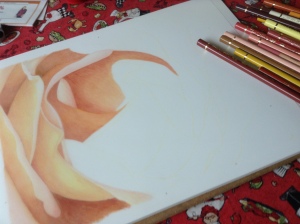 After the fun and games, it was time to color away. I strived more for the same shading as the original photo rather than trying to match the exact same colors (it does look more pink/peach in real life than in the photo, which makes the rose look more yellow-y). I did mess up a few areas by not keeping my pencil strokes smooth, but I don’t think they take away too much from the finished piece (I hope).

I also played a little “What’s It Going To Be?” game with the piece I did prior to the rose. This one was far less challenging and pretty much everyone guessed correctly that it was a zebra.

As I was nearing completion, I couldn’t resist having a little fun with a pack of googly eyes.

The finished piece is okay, but it lacks the warmth and depth of the zebra I did back in October. Part of this may be due to my scanner over-brightening the whites (notice the difference in the whites in the above photos and the scan below). Still, before I add this guy to the line up for my upcoming show, I’ll go back and add a few more touches of browns and ochres to warm him up.

Any thoughts on these? I love hearing from you, so be sure to leave a comment.