How’s the Book Coming Along?

With all the snow news, art projects to show off, and gallery acceptances to announce, it’s been a very long time since I’ve updated everyone on my writing. The update is…. (drum roll, please)….. I’m still writing.

During the holidays, I set my writing aside to make time to covertly sew Mr. Husband a couple shirts for Christmas while he was at work. Once those were done (in the nick of time) and once I made a writing/editing timeline, I knew I needed to get cracking on the draft I had been working on for Book Four of my fantasy series or I’d never get Book Three released in 2017.

(As you may recall, Book 3 and Book 4 are very closely linked in their storylines and, thanks to advice from the social media world, I opted to draft both books before continuing with the editing/publishing process of Book Three. If you don’t recall and are just itching to learn more, check out this post.)

Once I jumped back on the writing cart, my goal was to get the first draft of Book Four completed and dictated by the end of January. This meant devoting a couple hours of my work day to writing and even giving over weekend time to crank out the draft.

The hard part of writing Book Four has been keeping familiar scenes (such as Perseus visiting the three blind witches and killing Medusa) fresh. Especially since I grew up watching the original “Clash of the Titans” movie on pretty much a daily basis, it was a struggle to push the familiar imagery and dialogue out of my neurons to write something completely new while still sticking to the myth as possible. This turned out to be a fun challenge.

Despite some days of absolutely not wanting to pick up the pen, I’ve managed to stick to my schedule. Now, I’m super happy to say that I only have about five chapters/scenes to write before the (very rough) draft is complete. I should be able to finish these in the next few days, which means next week will be given over to dictating (I hate typing) it all into manuscript form.

Once my scrawl is transferred into a computer document, I’ll be able to better sort out which portions of Book Three can wait until Book Four, and which parts of Book Four might work better in Book Three. Then, it will just be the usual round after round of revising to enliven the settings, make sure everything is consistent, and to flesh out areas that are a little thin until I have a well-rounded Book Three that I’m sure you’ll all be scrambling to read! (In the meantime, you’ll just have to satisfy your curiosity with Books One and Two –The Trials of Hercules and The Voyage.)

But what about the snow?

Today is the first day the snow and ice have finally start to melt. Unfortunately, it is melting far more slowly than I would prefer, which means everything is a slushy, icy mess. Snow Bear has toppled and Snow Chicken has been reduced to breast meat only.

But before the melt began, I did have time for a few more snow creatures…

First, there was Snow Shark… 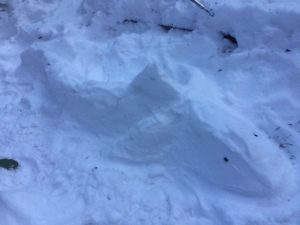 Then there was Snow Alligator…or is it a crocodile?

And finally, a trio of Snow Koi to adorn the pond. 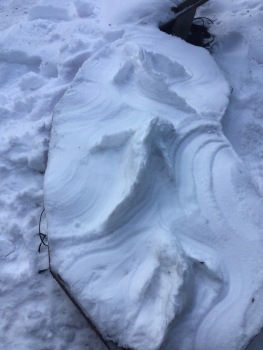 Have a terrific week everyone! Any goals for 2017 you’ve tackled already?

3 thoughts on “How’s the Book Coming Along?”