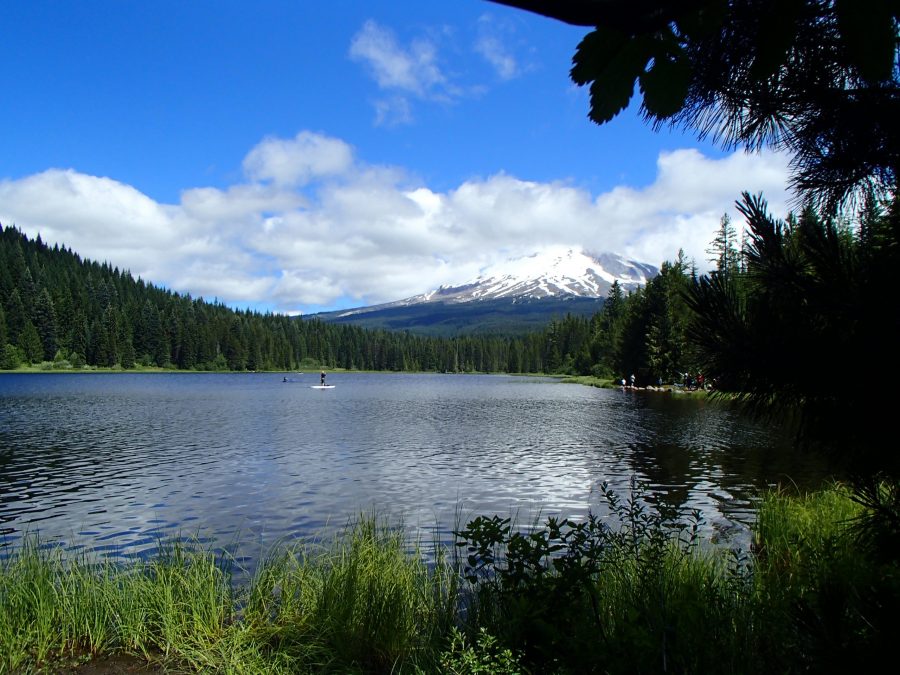 Last Wednesday Finn McSpool and I ditched work and headed off with Mr. Husband to the wild lands of the Mount Hood National Forest. Okay, in truth, Finn McSpool doesn’t  do much work, but he’s never one to turn down a day out and about, especially when an outing involves lovely scenery, wildflowers, and ducklings!

We started the day off right (or not, depending on your dietary hang-ups) with a couple donuts that were bigger than Finn himself.

After dosing up on sugar and fat, we headed  up and up to Mount Hood which is the tallest peak in Oregon at 11, 250 feet. Mount Hood is part of the Cascade Range that extends from British Columbia to Northern California. And no, Mount Hood isn’t the biggest peak. That honor goes to Mount Rainier at 14, 400 feet tall. The Cascades are also the location of the active volcano Mount St. Helen’s that made a mess all over the place when I was a kid. Of course, enterprising Northwesterners picked up the mess (ash, lots and lots of ash) and sold it to gullible tourists!

Trillium Lake is a man-made lake (created by damming up a natural waterway) within the Mount Hood National Forest. I’m pretty sure the site was chosen for its perfect photo op position to capture Mount Hood (photos which can then be turned into postcards to sell to gullible tourists), but I can’t find any sources to back up this notion. The lake was created in 1960 over a portion of the Barlow Road – the final land-based stretch of the Oregon Trail.

Before the 100-mile Barlow Road was built in 1846 by Sam Barlow and Phillip Foster (who got a bit ripped off on the naming of the road), there really wasn’t any way to get covered wagons over the Cascade mountain range. Without any U-Haul trucks, the only way to move your goods to your new home in the Willamette Valley was to sell off your firstborn child to pay for passage and then wait for nearly two weeks to catch one of the Columbia River boats that may or may not make it to your destination depending on what mood the river was in.

Built in a hurry by a couple of guys who seem to barely know what they were doing (for example, they forgot to figure in the cost of building bridges in their estimates), the Barlow Road wasn’t the best road in the world, but the toll was far cheaper than the river passage and ended up being the Route of Choice for nearly 75 percent of the people who moved out west over the Oregon Trail.

But enough history. Time for a day away from the studio!

After the drive Finn was ready to get out and stretch his legs…or not.

Trillium Lake features a very flat two-mile trail that takes you all the way around the lake. At this time of year, loads of wildflowers are in bloom and Finn (after exerting himself on the hike) wanted to lounge for a bit amongst them with his book.

And, at the end of the walk it was time for a bit of tree climbing….

After the morning trek, it was time to pump up our “yacht” and paddle around the lake. Again, Finn started off not putting much effort into this activity and preferred to watch the scenery go by instead.

Finally (once we were about ready to leave), Finn tried his turn manning the oars (or paddles, whatever).

And just as Finn was about ready to be forced to walk the plank, he attracted some new found friends….Ducklings!!

The ducklings had a little struggle trying to hop out of the lake, but eventually trundled off with mom for afternoon nap time (or whatever ducks do in late afternoon). For us, it was also time to pack up and head home.

By the way, Finn was created by Crawcrafts Beasties (just in case you want your own monster to share adventures with).

Did you have any adventures over the past week? Encounter any ducklings or other “Awww”-inspiring wildlife? I’d love to hear from you so be sure to leave a comment before you go!