Well, I had hoped to have two new pieces of art to show off today; unfortunately, sometimes the colored pencil gods don’t cooperate. But let’s not dwell on the negative because it’s time to meet Borris!

Borris is an Amur Leopard who spends his days lounging at the Oregon Zoo. He’s quite a handsome fellow, but a bit shy (I would be too if everyone was trying to kill me for my fur). One day I managed to capture a photo of him at a distance.

I liked the photo, but if I was going to put old Borris on paper I wanted an image with more impact. Bring out the cropping tool.

Working In a New Way

As some of you know, I’m in a hurry to complete enough pieces by the end of the month for a show in April. This has meant finding slightly faster ways to work. I say “slightly” because there’s no real way to rush colored pencil art. After all, you can only work so fast when you’re using a one millimeter-wide pencil tip to cover a 9″ by 12″ piece of paper.

Although I’ve drawn a few animals in graphite, I’ve never done a furry critter in colored pencil. The only thing I knew going into this drawing was that I needed to keep the pencil strokes going in the direction of the fur growth. So, using some pretty basic linear strokes, I started filling in Borris. It was scary at first, but somehow worked out pretty well.

The linear strokes don’t give the rich, saturated look of some of my other art (see examples in the poll below), but I think they helped me  keep Borris looking fluffy without looking cartoon-y (and without taking excessive amounts of time). 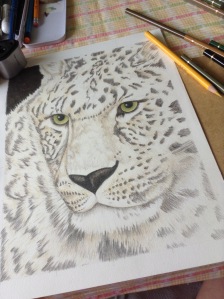 I considered deepening the color on the fur to match the darker browns and yellows of the real-life Borris, but instead opted to only deepen the color only at the eyes so they really catch a viewer’s attention.

Now I just need to find another zoo creature named Natasha so Borris can have a partner against that pesky moose and squirrel.

Want to be part in the democratic process? Want to feel like your vote matters? Then be sure to vote in the first of my polls in which I ask you to help me decide which bits of art get mounted on the gallery walls in April. You can learn more about the poll here, or you can just vote now. 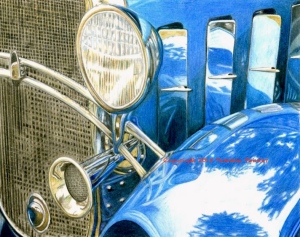 TAMMIE PAINTER IS THE AUTHOR OF THE TRIALS OF HERCULES: BOOK ONE OF THE OSTERIA CHRONICLES AND AN ARTIST WHO DEDICATES HERSELF TO THE TEDIUM OF CREATING IMAGES WITH COLORED PENCIL.