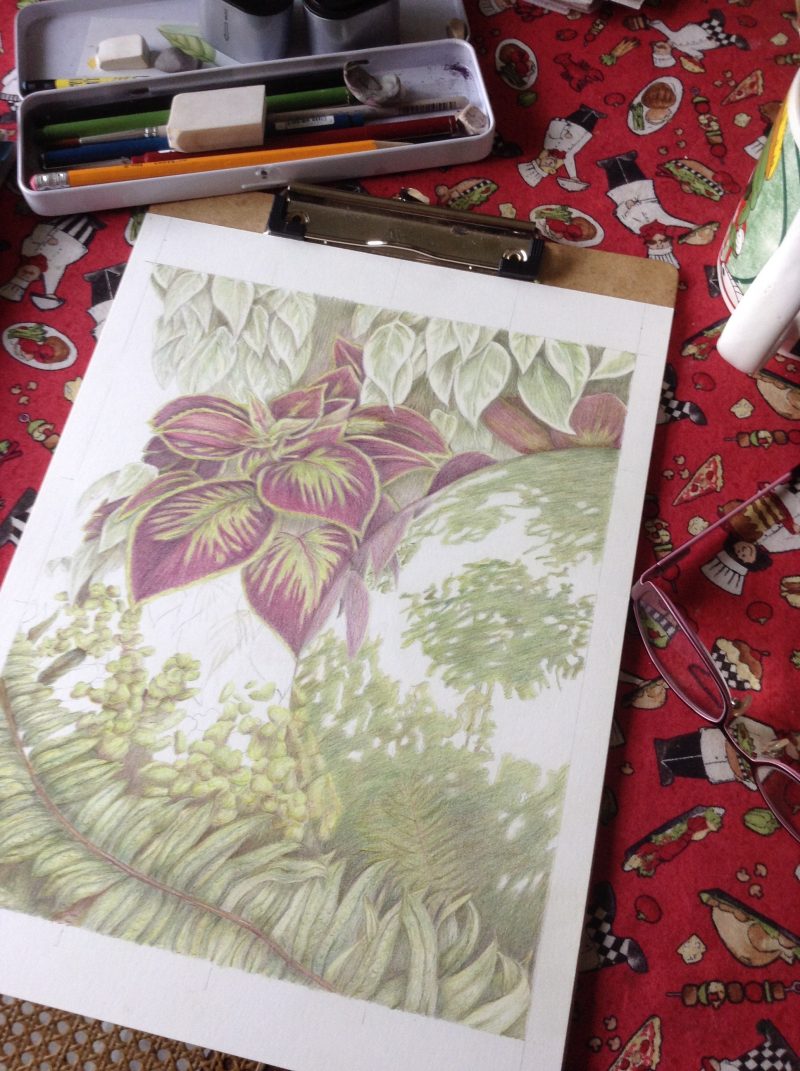 Yay! I’ve added another piece of art to the candidates for inclusion in my upcoming art show. The date for when I have to have everything ready is drawing (haha) close, but it looks like I may squeak everything in by the deadline. But enough introduction. Let’s get to this new bit of colored pencil art.

Last September, as my loyal readers may know, I went to Seattle with my mom and one of our stops on our whirlwind trip to the Emerald City was the Volunteer Park Conservatory. During my photo snapping, I not only got the picture for my Anthurium piece, but also caught this cool image of a gazing ball surrounded by ferns and coleus.

I loved the arrangement of the fern swooping across the front and the colors of the coleus and knew this had to be drawn. It presented a great challenge and forced me to work in a way I hadn’t tried before.

The first order of business was keeping in mind that, as I worked, I was going to have to turn the rather dark photo into something a bit brighter otherwise nothing would stand out (plus I’d have to spend loads of time trying to create deep dark colors).

When starting time did come around I was feeling a bit intimidated by the picture’s complexity, so I set to work on the simple leaves up in the right hand corner. Rather than using my typical way of working in which I try to create super rich colors by doing up to fifteen layers of color, I used a technique I’d seen in a few colored pencil books. 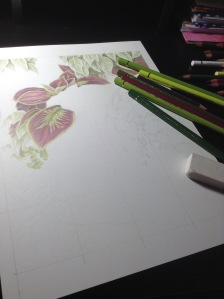 This technique involves using parallel strokes/lines and very light layers of color to achieve the shading and detail of your image. Not only did I love the soft texture this created, but it made filling in areas go much faster than normal.

I did use some heavier pencil work on the little chartreuse leaves and the fern to make them pop a bit. I have to say that fern came out pretty darn good.

Of course, as always, my worst time came when all the major detail had been filled in. I still had a  white background and was contemplating just leaving it white since I was afraid of ruining the work I’d already done. But the white was just too stark so, using the same light parallel strokes, I filled in the background bit by bit while leaving the gazing ball background white.

I think the sepia tone effect of the main background really makes the gazing ball stand out. Overall, I am amazed at how well this came out and can’t wait to see how it looks in a frame and mounted on the gallery wall! 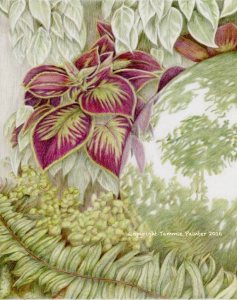 Voting Time Is near

Once I complete my next two pieces for the show I will be asking for your feedback. I should have  about 11 to 13 bits of artwork and need to narrow that down to 7 to 9 pieces for the gallery space. Since I hate having to decide which of my babies is the prettiest, I’ll be asking you to vote during the first week of April to help me to decide. I can’t wait to see your choices!

TAMMIE PAINTER IS THE AUTHOR OF The Trials of Hercules: Book One of the Osteria Chronicles AND AN ARTIST WHO DEDICATES HERSELF TO THE TEDIUM OF CREATING IMAGES WITH COLORED PENCIL. CLICK HERE TO FIND OUT WHERE TO SHOP FOR HER WORK.