Anyone who has known me for more than half a second will be aware that I love my lists. In addition to my monthly, weekly, and daily To-Do lists there’s my To-Paint list for new artwork and my To-Write/Edit list for new publications. But my favorite list of them all is my To-Read list to remind myself of all the terrific tomes whose words I want to cram into my head.

However, a strange moment occurred when I realized I might have to put two of my own books on my to-read list. After all, in their many, many revisions I’ve probably read these books at least seven times each. Did I really have to read them again?

Turns out, I did.

As I am currently working my way through the second draft of the third book of my Osteria Chronicles series, and as it’s been over a year since I published the second book (and nearly two years since the first book), I’m noticing there’s plenty about the world I’ve created that I’ve forgotten. Street names, building layouts, exact political rules, habits of minor characters, and other sorts of little details.

Sure, each of these books is meant to be able to stand on its own (meaning you could pick up any one of the books once they’re all published and be able to follow its story), but since this is a series and readers will get more out of the books if they read them in order, there needs to be a hefty dose of consistency or people will point and laugh at me. And Number One on my List of Things I Want to Avoid is having people point and laugh at me. 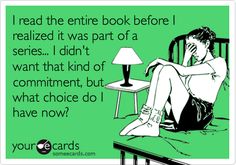 Despite my love of list making, apparently I’m not organized enough for detailed note taking. I do have a notebook in which I have a few notes about my world. The notebook is even titled “The Osteria Chronicles: Notes & Stuff.” You’d think with a title like that, I’d be overwhelmed with details to draw on. But no. Other than a few notes about major characters, a list (of course) of locations, and a couple drawings of settings, the notes are pretty damn thin.

There was no way around it; I was going to have to give Books One and Two another read over. And this time I swore every little detail would get jotted down into the notebook.

Although I dreaded heading into The Trials of Hercules (Book One) for the eighth (at least) time, it only took two pages in before I realized how good the book really is. I know that sounds incredibly full of myself, but keep in mind that I am VERY critical of myself in every way possible. I go into every reading expecting my writing to be utter crap (since according to agents, that’s what this book is). So when I start reading with my critical eye and am immediately sucked into the story, I do have to give myself a little high five.

I have noticed several places where I could have worded something better, a missed comma here and there, and (gasp) even a typo, but overall I have to agree with my reviewers that this is a pretty darn good story. Still, I’m forcing myself to not edit as I go. This is a note-taking expedition and nothing more. (I am wondering if/hoping I already caught these errors since I’m reading from a pre-publication copy, not the final version of the book.) Although I’m sure “edit The Trials of Hercules and The Voyage once more” will go on to the to-do list at some point.

What’s on your to-read list? Any books you’re really looking forward to? Any you’re dreading? Do tell!

7 thoughts on “Putting Myself On My Own To-Read List”