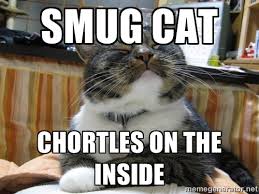 I’m not normally someone who gloats over other people’s mistakes. After all, we’re only human (except for Taylor Swift who I’m certain is some type of alien life form). Still, when I see errors in books from the big name traditional publishers, my inner Gloat Monster gets quite a kick.

In fact, I take on a rather maniacal gleam when I find these foibles. I point at them. I force others to look at them. If I had a smartphone I’m sure I’d snap photos of them to post on Instagram with the hashtag FAIL.

This error extravaganza seems to be a recent trend. When I dive into my used books that were published over twenty years ago, I don’t find any errors. I’ve no doubt some of this is due to editors now trying to read on the screen rather than on paper, but maybe, just maybe, some of it is a lack of professionalism on the part of the traditional publishers.

Lately, these glaring mistakes crop up quite often: from spelling problems to grammar issues to inconsistencies that should’ve been caught by even the most junior of editor. Most recently, I read Stephen King’s new collection of stories, The Bazaar of Bad Dreams and found an inconsistency that would have a publisher giving a lesser known (and less lucrative) author the cold shoulder. Another book (not by Stephen King) had three errors in only two pages, not to mention several other mistakes scattered throughout the book.

I do take a vindictive pride in catching these faults.

But why? What turns a mild-mannered girl like me into such a gloating bully?

Traditional publishers deserve my scorn because they behave as if they’re gods. Think about it… They control a writer’s future when (using their godly omniscience) they claim a book isn’t what the market wants; they insist on only being contacted by their servants (aka “agents”); they put themselves up as infallible beings; and they insist on having the last word.

Okay, maybe I need to tone this down a bit and explain.

People have expectations for traditional books and for self-published books (and by self-pub, I also include small presses). Traditional books are supposed to have been vetted by professionals who know better, whereas self-published books are thought to be just some slap job thrown together by a hack who wasn’t good enough to get a “real” publisher.

There’s a belief that self-published books are going to be a string of poorly developed characters stuck in horribly plotted situations and crammed full of text that is riddled with errors due to the author only bothering with a single round of self editing (okay, this is true in some cases, but not all).

Traditional books on the other hand are expected to have been passed under the god-like eagle eyes of editors and copy editors. These books are thought to be full of better crafted stories and more believable characters than any self-published book could ever have.

These ideas are wrong.  Fifty Shades, the Twilight series, and my most recent reads are proof of that. Sure, there are some crap self-published books out there, especially when people get in a rush to get their manuscripts on Amazon and into your Kindle, but traditionally published books from the Big Five aren’t immune.

Well, the first point is that I would make a great copy editor if anyone needs one (please ignore the typos on this blog post, they don’t count since I edited this on a computer screen).

Second, all writers need to improve their self-editing skills because even the pros don’t catch everything.

Third, don’t assume self published books are “less than” traditional books. Many of us self-pubbers have worked very hard to put out quality books (in my case this hard work is mainly because I don’t want someone like me having a gloat fest over my mistakes).

Catch any errors in big name books lately? I REALLY want you to gloat about it in a comment!

5 thoughts on “Gloating Over Publishers’ Mistakes”