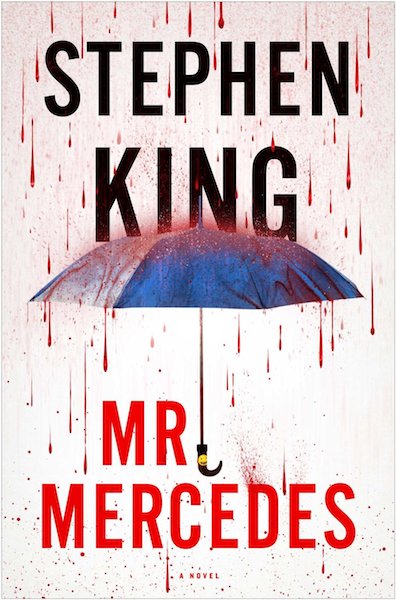 I know, shame on me, it’s been quite sometime since I’ve shared something that tickled my fancy. That’s not to say I’ve been living in a locked cell with no exposure to the outside world (okay, maybe some days), I’ve just been too busy to blog (in fact, there’s been loads of wonderful films and books that I’ll have to catch you up on). But this week there’s no excuses and I’ve been super excited to get to Saturday to tell you how great Mr. Mercedes by Stephen King is. 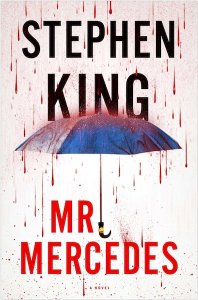 Retired detective Hodges is pretty down in the dumps (meaning he sits around toying with a loaded gun and seeing how well it fits in his mouth). One day a letter arrives from someone who claims to be the person responsible for an unsolved case of Hodges’s in which a man in a stolen Mercedes plowed down a group of people outside a job fair. The letter stirs something in Hodges and he decides to look into the case once more just for something to do.

What follows is a cat and mouse game of Hodges and Mr. Mercedes (aka Bradley Hartsfield) with King switching between the viewpoints of these two characters (and a few others) as Bradley – who is one messed up individual that leaves your skin crawling – plots another mass murder. How many of Hodges’s loved ones Bradley will take out as he moves closer to his plan is anyone’s guess. In the end, Hodges’s is forced to decide if being to one to stop Bradley is worth the lives of his friends, or whether he should hand the matter over to the police and go back to his retirement.

I haven’t read a Stephen King book in quite a while and I am super duper thrilled Mr. Mercedes was the novel I happened upon to jump back into King’s creepy world. As King has shown in many of his works, it’s not the supernatural or monsters or aliens that are the most frightening things out there; it’s other people.

Bradley is just any guy. He’s a tech guy who comes out to fix your computer and he’s the ice cream man. But King, as he reveals Bradley’s home life, back story and mental state, proves Bradley is scarier than any werewolf or vengeful ghoul. And before anyone gets upset over a negative portrayal of mentally ill people, do know that another mentally ill person plays a major (and quite heroic) part in assisting Hodges.

Everything about this book piqued my interest, mainly because King introduces so many questions that I just had to find the answers to such as what exactly happened to Bradley’s little brother, will Jerome’s dog get poisoned by Bradley, and (the biggie) will Hodges stop Bradley in time to stop his next attack? Of course, besides the plot-driving, page-turning questions, the characters are great, the story moves quickly, and the touches of humor come at just the right moments. It’s also fun to see King referring to/mocking his own work such as the creepy sewer clown in It.

If you are a Stephen King fan, make sure you don’t miss this one. If you’re not a King fan, this book could change your mind!

What was the most recent Stephen King book you’ve read? How did you like it? Share your comments so I know what to read next!

Saturday Selections is a feature of this blog in which I share a book, movie, food item, restaurant, or whatever else I enjoyed over the past week. To keep up to date with my recommendations, be sure to follow this blog or stay in touch by using the form below to sign up for my mailing list.