Behind the Book: The Trials of Hercules

Okay, this post isn’t really ALL about me. After all, Tuesdays are all about shameless promotion of my books, but rather than explore one of the myths behind my latest release (The Trials of Hercules: Book One of The Osteria Chronicles), I’m delving into the creation of the book with a little Author Interview.

And Now….The Interview (No, not THAT Interview)

How did The Trials of Hercules come to life?

I’ve always been fascinated with Greek mythology and came across a documentary series about the historical basis of many of the characters in Greek legends. One of the episodes was on Hercules’s Twelve Labors and I thought, “How would that play out if this was set in modern times?” I played around with the story trying to force it into a modern setting, but couldn’t get it to fit. About fifty pages into that draft, I realized it just wasn’t working. But I loved the idea too much to give up on it. 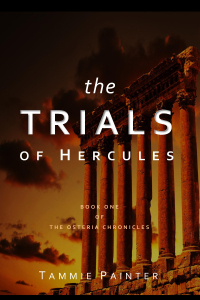 After many brainstorming sessions, I considered how the story could work if I set it in a post-apocalyptic society in the future that had adopted Greek and Roman ways of life. And what if the gods were real players in this world? The idea took hold quickly. The outline for it flowed out in less than a couple hours and I had a rough draft in about six weeks.

What has been the biggest surprise with this book?

The overwhelming positive reaction. After the shaky start coming up with the concept of the book, I had many times when I thought everything about this story was horrible (stupid, ridiculous, you name it, I thought it). Draft after draft ended up cobbling The Trials of Hercules into a story that I loved, but you never know how readers are going to react to your baby. After sending off the book to the first reviewer I kept expecting to receive an email telling me how iditotic the book was. When she instead sent me an email bursting with praise, well, i was happy, but also thought maybe it was a fluke. Now nearly every reviewer has given The Trials of Hercules four or five stars and heaps of kind words. I have been truly humbled (and encouraged) by the responses to the book.

Who is you favorite character in The Trials of Hercules and why?

Of the mortals, I would have to say Herc’s cousin, Iolalus. He’s very loyal, but not afraid to let Herc know when he’s being a jerk. There’s a wry humor, humility, and cleverness about him that I love. As for the gods, Hermes is my favorite. I love his vanity, I love his cattiness, I love his wit. I look forward to writing every scene in which he is the star player.

If you based The Trials of Hercules on legends, isn’t the book predictable?

I hope not. Of course, I do hope people who aren’t familiar with the legends pick up the book – for them everything will be a new twist. For those familiar with the myths, the underlying subplots and the character development will add a new dimension and depth to the story. Although most of the labors do end up with the same result, I have changed some other aspects of the myths to bring new life to the story. Judging from how many people say they couldn’t put the book down and the anticipation they feel for the story and characters, makes me believe that readers have not found The Trials of Hercules predictable in any way.

What was your favorite part of writing The Trials of Hercules?

Getting to give everyone personalities. Myths and legends often simply tell a basic story. “This guy made this god angry so the guy went off and did this.” When you expand that into a novel, you have to try to figure out what’s motivating these characters, how would they talk, how would they move, how would they behave. One of the most common comments reviewers make was how great it was to get inside the minds of the gods and to see these rather flat characters being pumped full of life. As character development is one of my biggest challenges when writing, those reviews made me truly feel this book was a success.

What is your favorite scene in the book?

There’s a scene where Hermes is preening his helmet wings and Hera gives him a condescending look. His reaction is great – but I am a little biased toward any scene with Hermes. As far as a full, non-Hermes scene, I have a minor character who at one point is brought in for questioning. He’s already experienced some terrible events earlier in the book and is not a guy who is naturally brave in the least. The horror of those events consume him in the early parts of the scene and I love how his fear plays out.

Thanks for reading everyone! And if you have any questions you want me to answer about writing or my books, feel free to ask in a comment below!

4 thoughts on “Behind the Book: The Trials of Hercules”