It’s Tuesday and, if you’ve been keeping up with this blog, you’ll know that means it’s time for another interview with one of the characters from The Trials of Hercules: Book One of The Osteria Chronicles. The book won’t be released until 18 October, but these interviews are a terrific way for you to get to meet the characters before the novel’s official birthday.

And no, I don’t make up these questions; they come from the talented Cee of Cee’s Photography and are part of her weekly blog event Share Your World. I never know what questions Cee might throw my way, so this is also an excellent way to challenge my knowledge of my characters.

When I first saw this week’s questions, I thought, “Cee, you’re killing me here.” One was based on technology that no longer exists in the world of Osteria. Luckily, there are plenty of gods in Osteria who have seen it all and can answer these tough questions.

This week I’m interviewing Poseidon – god of the oceans, rivers, lakes, and horses. He doesn’t have a large role in The Trials of Hercules, but he does play a vital part in making his sister, Hera, see how her treatment of Hercules is unfair and unreasonable. He’s always a great character to bring on the scene, so let’s get to the interview:

Q: Have you ever been in a submarine? If you haven’t, would you want to?

(Laughs) That’s a good one. I’m the god of the seas. What do I need with a submarine? I’m immortal so I can spend as long as I want under water. Sometimes, when the bickering gets to be too much on Olympus, I can spend days just wandering around the kelp forests and sea caves. I do remember seeing submarines back before the Disaster. Strange things and terrific fun to swim up to, press my face against a window, scare the Hades out of someone and then watch them try to explain what they’d seen. It was also a great prank to cut all the lights and power for a few seconds and watch all that human confidence fall away. Still, it did give me a sense of pride to see how curious mortals were about my realm, so for the most part, I made sure the submarines bobbed around safely and even guided a few to some fascinating discoveries. I kind of miss them now that I think about it.

Q: Are you a listener or talker?

Definitely a listener. It’s why Hera, my sister, comes to me so often to confide in. She has Hermes to gossip with, but I’m the one she truly talks to. Still, there is a time for talking, but it takes a great listener to know when that time is.

Oh, definitely crunchy. I love to crunch my way through anything. Except sand. Oddly enough I’m not a big fan of sand especially when it gets in my food. As far as what to have with my peanut butter, I like to coat shrimp in it. Mmm…salty, crunchy, peanut-y…makes my belly grumble. Why are you pulling that disgusted face – I’m a sea god, did you think I wouldn’t enjoy seafood with everything? We better move on to the next question.

Q: Have you ever been drunk? 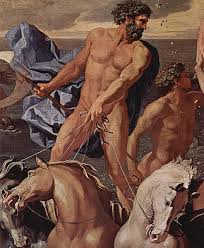 Um, well, I try not to drink too much. The gods do love their wine (mainly because we have to put up with other gods), but it takes quite a lot to get us drunk. Still, there was that one time. I was very young; I’d barely seen a couple millennia. Zeus and I got into a drinking contest and, well… You know how most cultures have a myth about a Great Flood? Um, yeah, that was me. Drunk me. I’ve avoided overindulging to that extent ever since. Besides, you really need to stay on your toes around the other Olympian gods – you never know when Hera is going to try to suck you into one of her deals or schemes. Too many helpings of the grape leaves you at a clear disadvantage.

I hope you enjoyed this weeks interview. If you want to catch up on the previous interviews you can find them at these links: